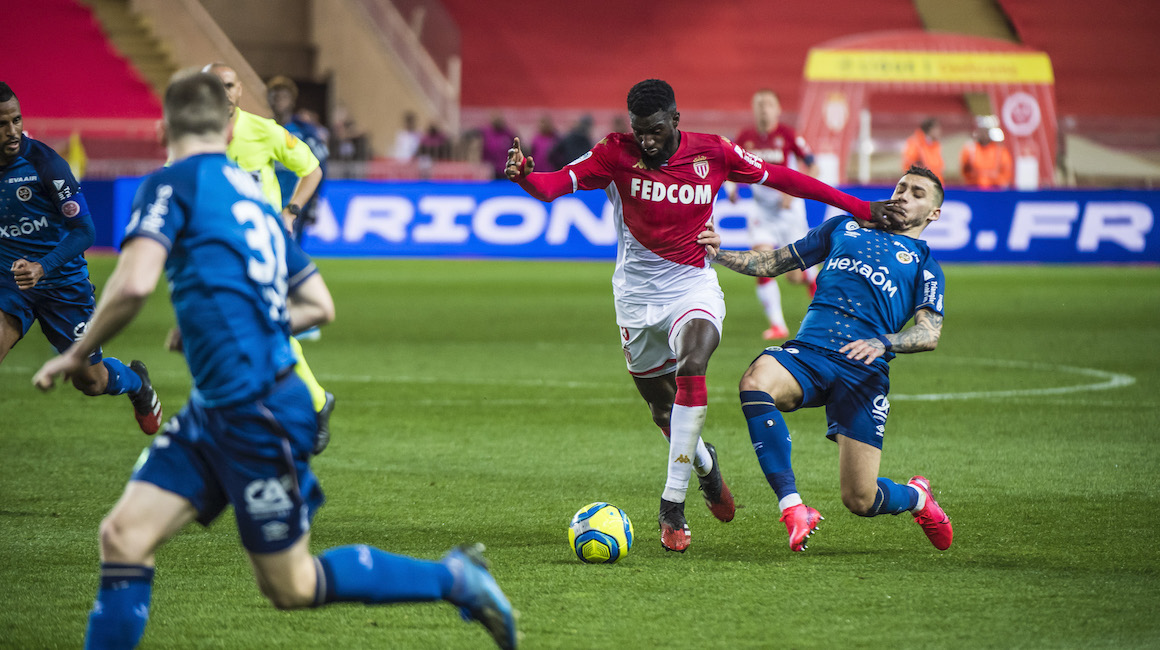 AS Monaco and Stade de Reims drew this Saturday at Louis-II (1-1) at the end of a match which could have turned to the advantage of the Red-and-Whites. Wissam Ben Yedder scored from the penalty spot in the first period.

It was a clash between contenders for Europe that awaited the spectators of Louis-II on this 27th matchday in Ligue 1 Conforama. When the match began, only two points separated AS Monaco (5th) from Reims (7th) in the standings. After a few minutes of  delay following a power failure, the chances were not long in coming. Reims’ Touré and Kamara had their chances at the start of the match, but Lecomte was, as always, imperious. In the seventh minute, Baldé did much the same on the right side of the opponent’s area but came up short against Rajkovic. The visitors’ last bulwark was again decisive on Golovin’s powerful strike, well met at the far post by Ben Yedder moments later. This first quarter of an hour was thus a match decided by the goalkeepers. Baldé created a second opportunity in the thirteenth minute and in fine fashion: the Senegalese had an absolute missile from thirty meters which crashed off the crossbar of the Champagen side. On the rebound, he had a chance again but the ball was off target. 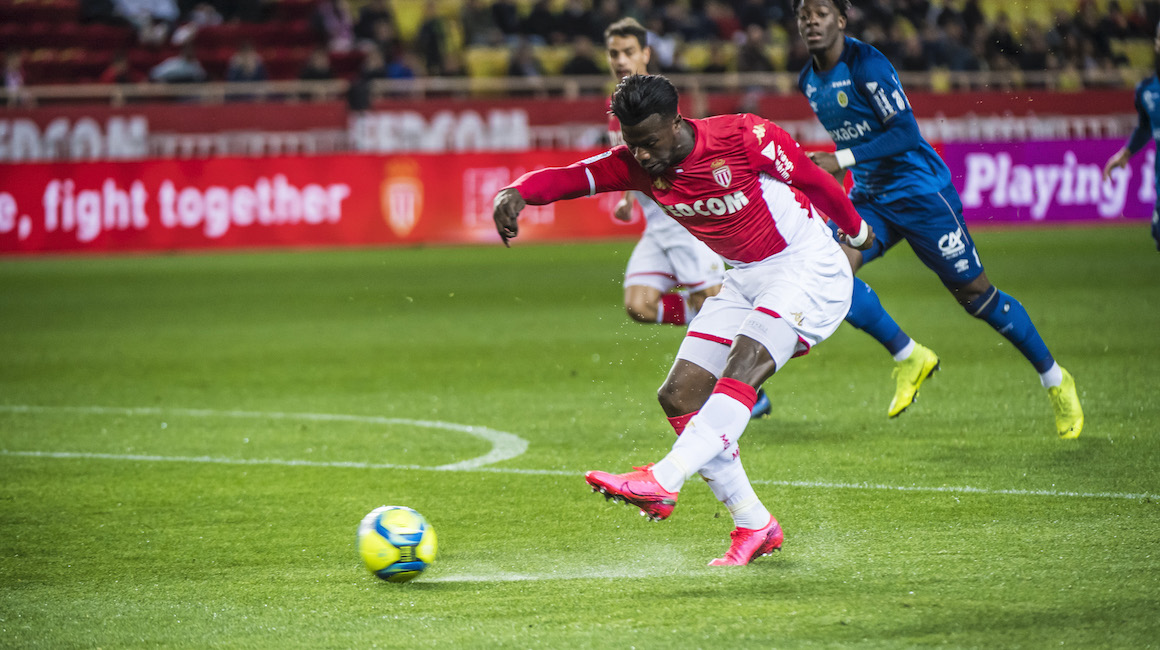 The players of Robert Moreno were given plenty of confidence by this new opportunity and gradually took the impetus against their adversary. The match broke open in the thirtieth minute when Baldé, tackled in the area, was brought down by Foket. Mr. Ben El Hadj  pointed to the penalty spot without hesitation. Wissam Ben Yedder took the kick and hit his shot hard on the left side, and AS Monaco lead 1 to 0. A few minutes before the break, Fofana was himself dangerous by hitting a point blank shot at the right side of goal but Rajkovic prevented the breakthrough. Shortly thereafter, Ballo-Touré delivered a good corss to the far post which a Reims defender cleared only as far as Bakayoko. The French international did well and hit a powerful shot but was frustrated as Rajkovic dove perfectly. 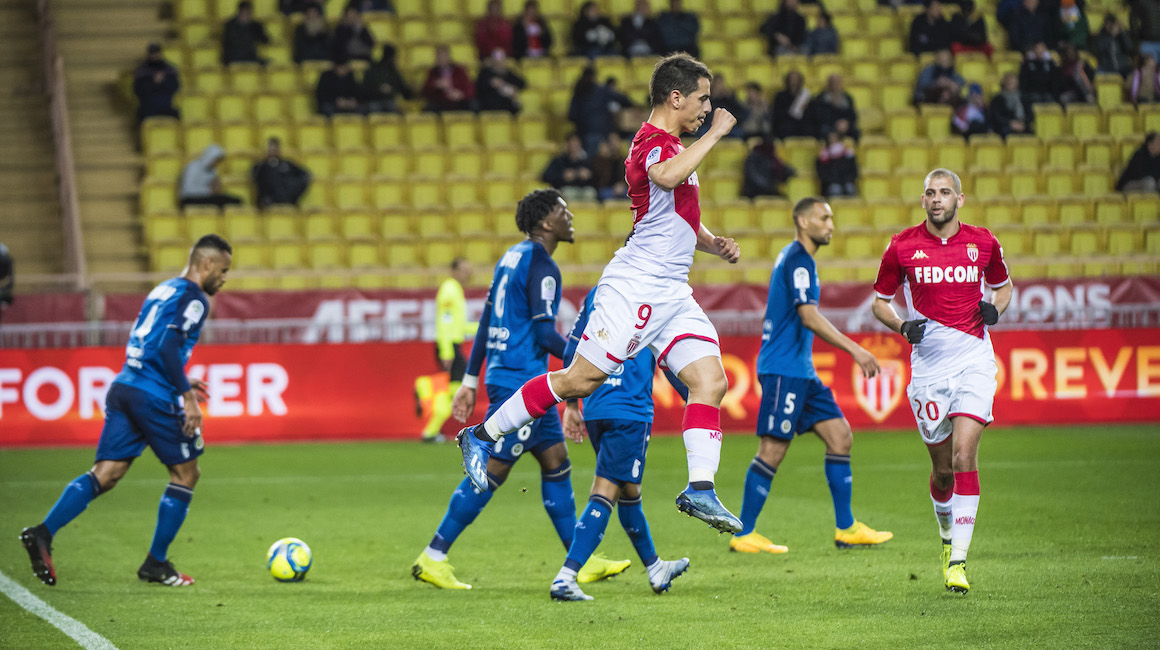 On the return from the locker room, Donis is the first to create a chance from distance in the 48th minute but the ball only touched the post. It was a first warning  for the Monegasque defense. Three minutes later, Lecomte intervened on a header by Foket in the area. Just before the hour, Stade de Reims found their goal: Kamara is picked out at the corner of the penalty area and surprises the Red and White goalkeeper by hitting a low shot past the far post (57th) — the visitors had returned the match to level terms. Monaco are struck and struggled to respond for a few minutes. A quarter of an hour later, the Reims forward again  had a chance  from a wide position but Lecomte watched the ball sail over. The players from the Principality continued their efforts, and Stevan Jovetic  tried a strike from twenty-five meters which  flew over the crossbar. In the 82nd minute, Golovin created space in front of the penalty area and let a shot fly across goal, but again Rajkovic was up to the task.

Rajkovic is unbeatable in the second half

The hosts were quickly remobilizing and continued to believe in a second goal. Jovetić made a lovely move in the area and hit a powerful shot but the Reims goalkeeper, having a big evening, was quick to claim. Newcomer Aurélien Tchouaméni, who was playing his first minutes with the club, also had a chance from distance in the 86th: the ball was deflected and hung in the box, Ben Yedder found himself alone in front of goal and collided again with Rajkovic. On the following action, Dia failed to beat Lecomte with an over-hit lob. AS Monaco did not give up and kept driving through the end of the match. Slimani  could not get his volley on target from close range in the 92nd, while Jovetić saw his shot  strike the crossbar (90 + 3). The following corner lead to a scramble less than a meter from the goal line but Rajkovic is not determined to leave the Monegasques an opportunity. The Stade de Reims goalkeeper grabbed the ball and gave his partners a draw in the Principality.