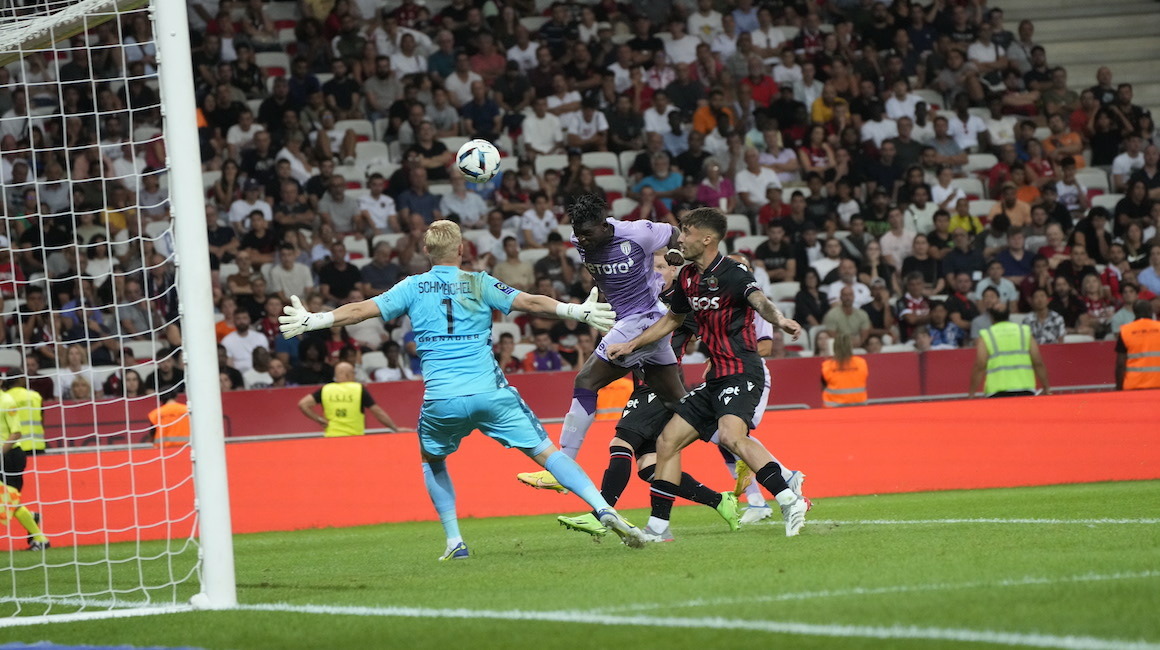 Thanks to a header from Breel Embolo in the second half, the Rouge et Blanc left the Allianz Riviera with the three points in the Côte d'Azur derby (1-0). They moved up to tenth place.

At the end of a largely-controlled match, AS Monaco won away to Nice in the 103rd Côte d’Azur derby by the score of 1-0 thanks to a headed shot  by Breel Embolo. At the start of this sixth round, Philippe Clement decided again to play a 3-4-3, with starts for Benoît Badiashile and Youssouf Fofana. The two were respectively celebrating their 100th match in Ligue 1 and their 100th match in all competitions for AS Monaco. Aleksandr Golovin and Krepin Diatta were also back in the eleven. 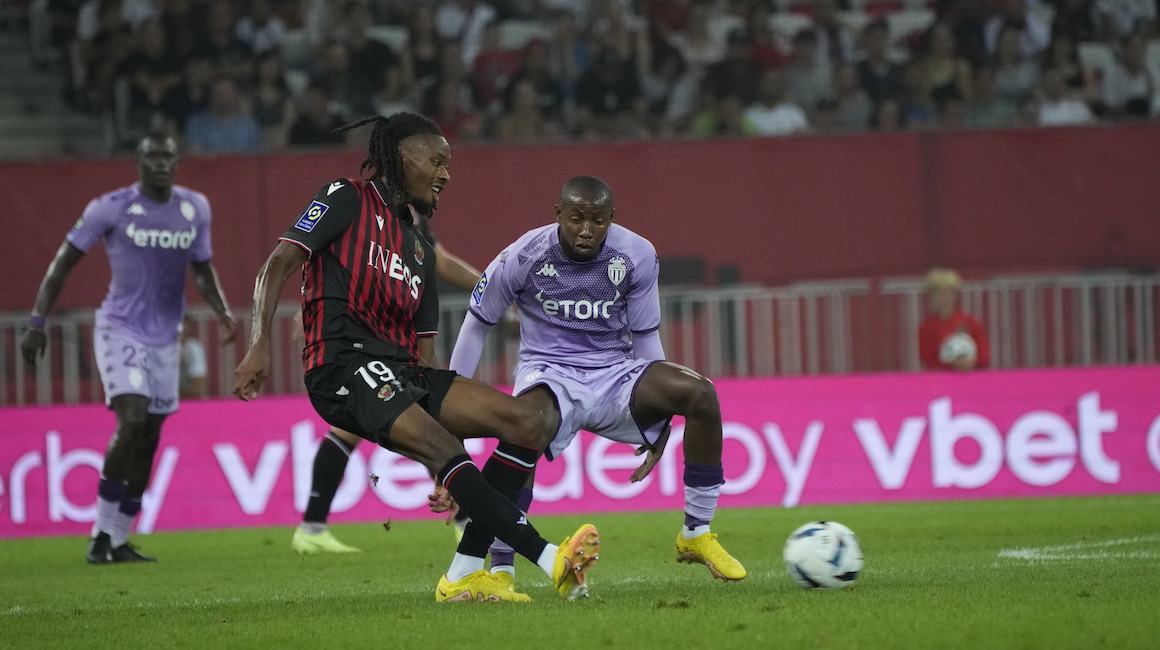 A tightly-fought start to the match

The beginning of the match served as a round of observation between the two sides. Indeed, it was necessary to wait for the 12th minute of the match to see its first shot, as Youcef Atal forced Alexander Nübel into a diving save.

The Monegasques, dressed in their third jersey for the first time this season, react quickly, but an attempt from range  Youssouf Fofana was blocked by a defender (17′). Then, a perfect cross from Caio Henrique was cleared at the last by Dante ahead of Breel Embolo (20′).

Chances for both sides

The match was balanced and the two teams went blow for blow, as Nice created an opportunity less than ten minutes later through Nicolas Pépé. His shot from the edge of the area did not worry Alex Nübel, however, who calmly gathered the ball (29′).

The Monegasque reaction would take place 12 minutes later, through Aleksandr Golovin. At the right side of the area, the Russian midfielder unfortunately overhit his shot, as it flashed past the left side of Kasper Schmeichel’s goal (41′). The first period finally ended with a header from Dante, but it lacked the power to worry the Monegasque goalkeeper (45′). 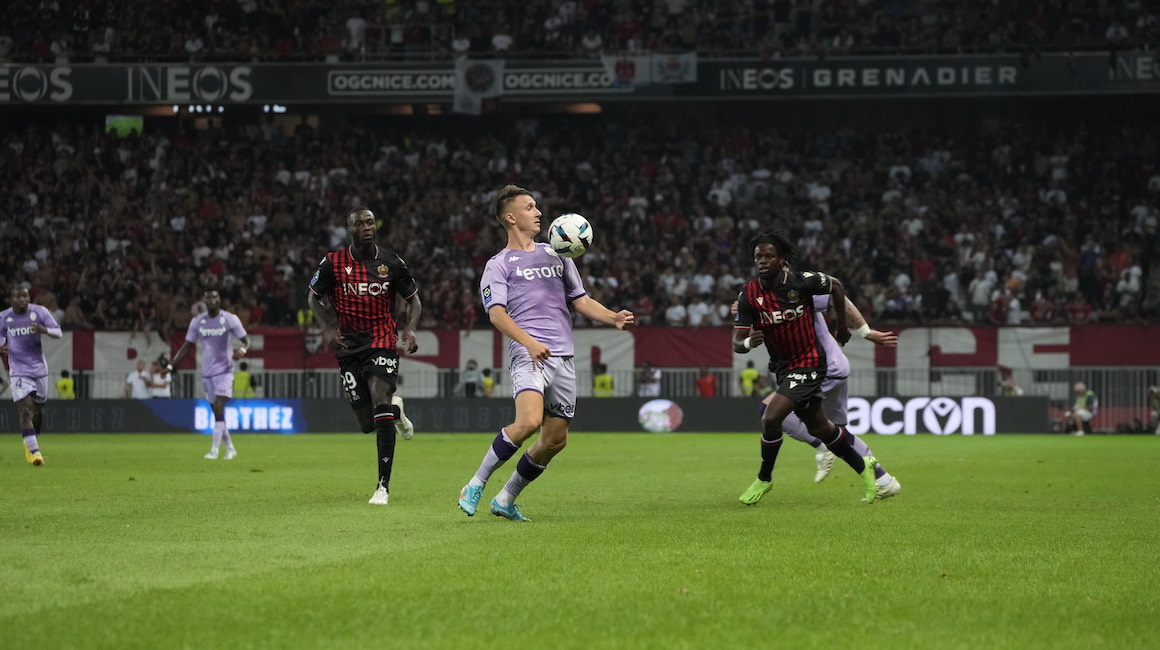 The second period started at a higher pace and there were chances for both sides. Aleksandr Golovin first hit the post (51′), then Krépin Diatta performs showed a nice bit of skill on the right flank before trying his luck, but his shot went wide. Finally, for Nice side, another header by Dante forced Alex Nübel to make a good save on his line.

More dominating, Philippe Clement’s men were then denied a goal by Youssouf Fofana, who was in an offside position (65′). It was only a postponement, though, as Breel Embolo, on a fine pass from Caio Henrique, opened the scoring with a sublime header (69′). It was his second goal in the colors of AS Monaco and the 20th assist for the Brazilian fullback!

Embolo gives us the lead! 👿

AS Monaco: Masters of the Allianz Riviera

United and willing in their duels, the Monegasques proved to be imperious over the end of the match, not conceding any real chances. They could even have doubled the lead through Caio Henrique, who after getting forward, lacked the power with his right-footed shot.

It was without consequence, however, as AS Monaco had won 1-0 at the Allianz Riviera, extendeing their unbeaten streak to six games (five wins, one draw) against Nice. This victory allows them to move up to tenth place before another big match against Lyon on Sunday (8:45 p.m. at the Stade Louis-II). Before that, they will head to Belgrade for the first round of the Europa League. DAGHE MONACO!