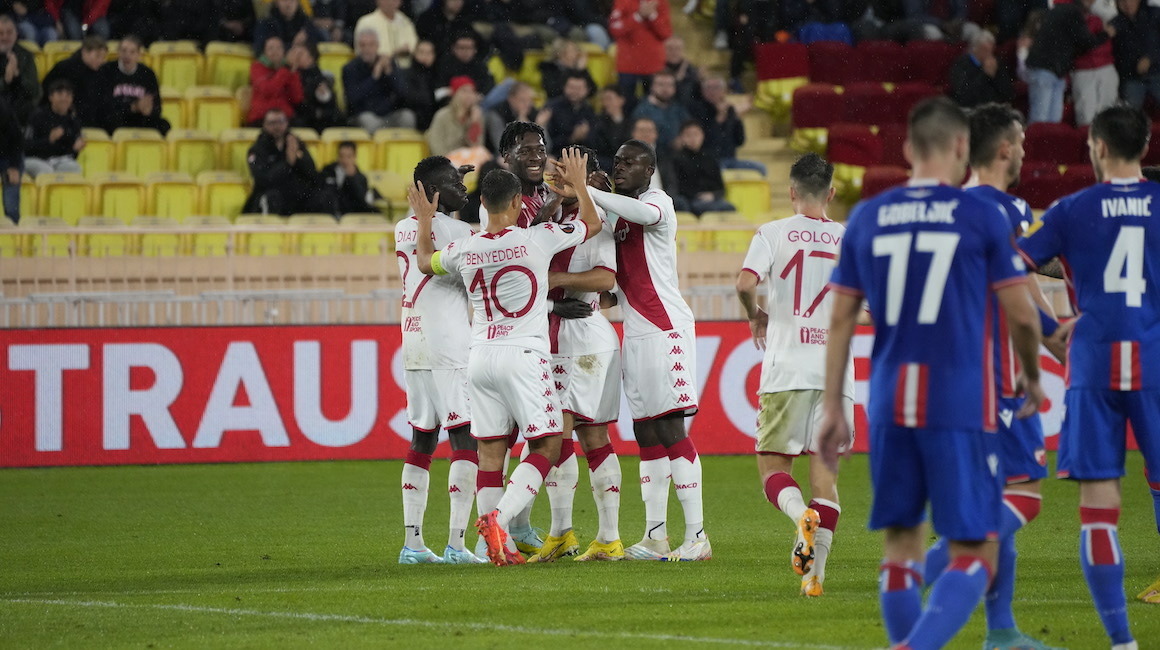 Far superior throughout the game, the Rouge et Blanc won authoritatively against Red Star Belgrade (4-1), moving into the knockout stages of the Europa League.

They did it! Only able to finish second at best in Group H of the Europa League, the players of AS Monaco outclassed Red Star Belgrade, to obtain their place  in the round of 32 of the competition in a 4-1 win. To start this final Group H match, Philippe Clement opted for a hybrid 3-5-2 (4-4-2 with the ball), with the trio of  Disasi-Maripán-Badiashile at the back. 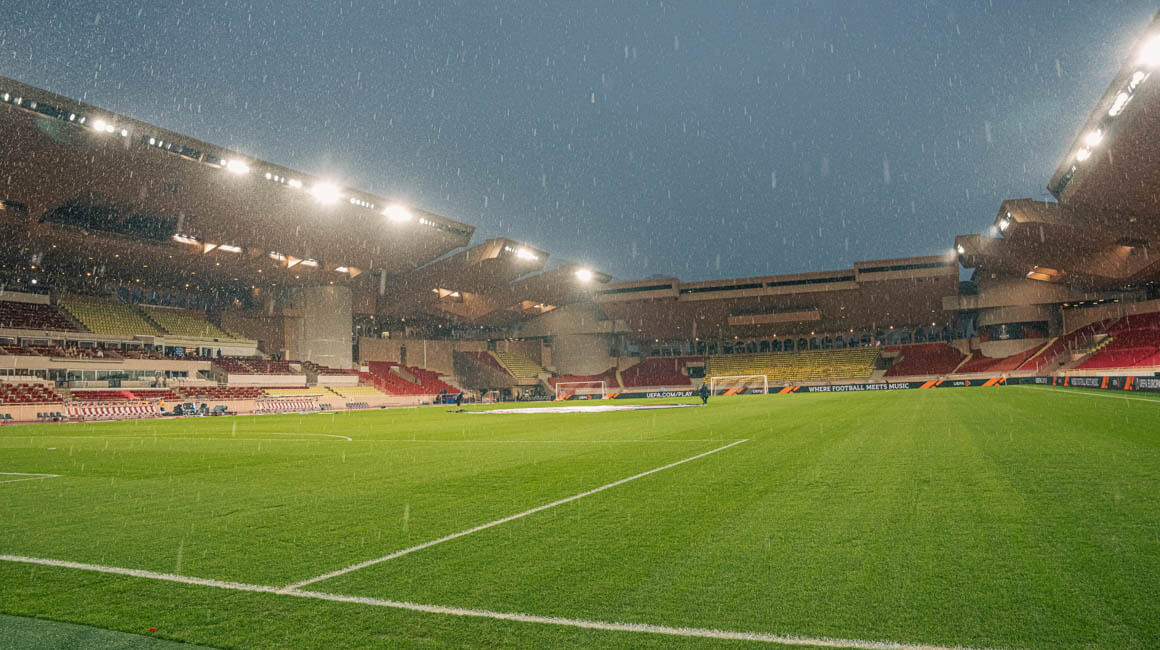 The match started very strongly with an early opening goal on a header by Kevin Volland, on a brilliant cross from… Caio Henrique (1-0, 5′)! What a start for the Rouge et Blanc. We were even very close to doubling the lead on a strike from Krépin Diatta (9′), then on a shot from the striker’s head, which was unfortunately stopped by Milan Borjan (10′).

5' YES!!! 🔥🔥🔥@KeVolland heads home from Caio Henrique's cross to give us the perfect start!

Dominant by a large margin, the Monegasques were again dangerous with Wissam Ben Yedder, even if his strike, too close to the centre of the goal, was blocked (12′). The captain even found the net on a shot from the left, but he was found to be in an offside position (16′). Then Kevin Volland, him again, stumbled against a Serbian defender with his volley (24′). But the German striker again found the goal on a nice pass from Krépin Diatta, which he sent into the goal from the right (2-0, 27′)! 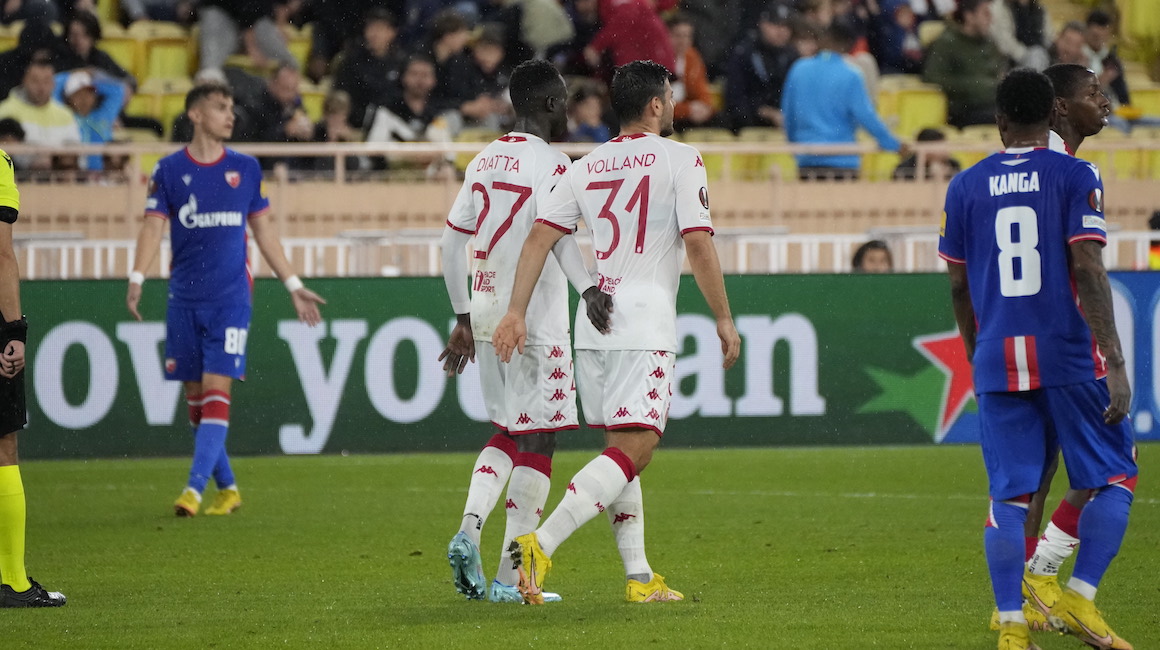 It was the third goal this season for our number 31, after his goal against PSG in August. The match was throughly one-sided, even if Aleksandr Golovin could not find the target (37′). Despite everything, AS Monaco found themselves with a two-goal lead at the break. The gap widened more after returning from the locker room, when the Tsar, who made his 150th appearance last Sunday with La Diagonale, forced Milan Rodic into an own goal (3-0, 50′).

Milan Rodic with the ball across, and it's turned in for an own goal!

Unfortunately the joy was short-lived for the Rouge et Blanc, who conceded a penalty to Guelor Kanga, for a foul by Benoît Badiashile in the area (3-1, 54). The Red Star tried to put on the pressure, including on a blocked cross which did not trouble Alexander Nübel (66′). The Serbs even believed they had scored a second goal on a strike from Aleksandar Pesic, but the former teammate of Wissam Ben Yedder with Toulouse was flagged offside (68′). 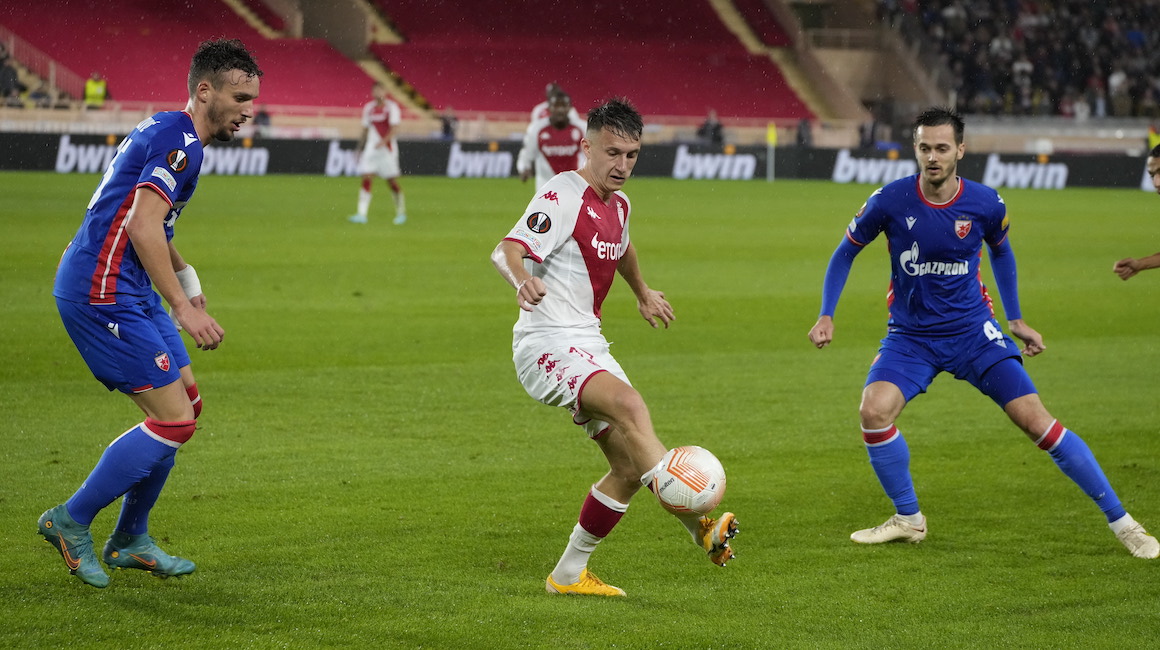 At the start of the last quarter of an hour, Philippe Clement logically decides to make some changes. And it paid off, as Breel Embolo had a one-on-one against Milan Borjan, but missed his chipped effort (77′). Red Star tried to reply on a curling shot by Mirko Ivanic, but it fortunately was off target (81′). But Kevin Volland, decidedly impressive on this European evening, bagged himself a hat-trick thanks to an inch-perfect cross from Ismail Jakobs (4-1, 87′).

The party was complete at the Stade Louis-II, despite the deluge falling from the sky, and Eliesse Ben Seghir would even take the opportunity to celebrate his first professional appearance. The attacking midfielder, trained at the Academy, then led the ovations from the Fontvieille end for Kevin Volland. The score remained 4-1 and the Rouge et Blanc were into the Round of 32 of the Europa League. It was a fine result, and it can be built on Sunday in Ligue 1 in Toulouse (3 p.m.). DAGHE MUNEGU! 🇲🇨