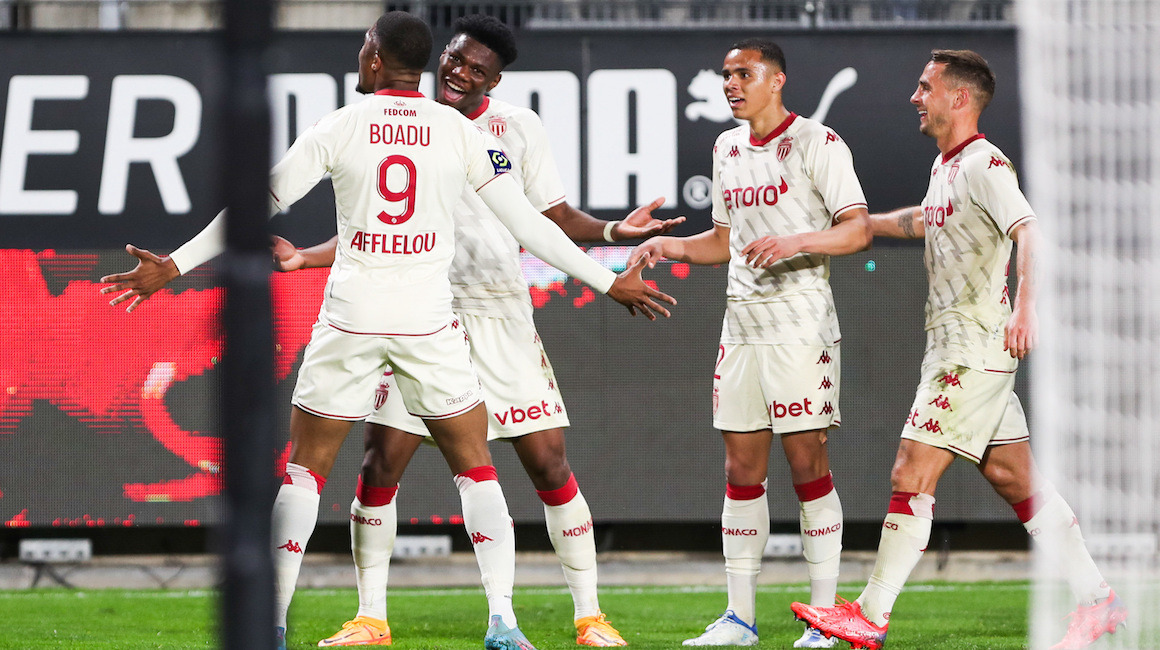 Very solid in turning the tide away to Stade Rennais, the form team in Ligue 1, the Rouge et Blanc left Brittany (3-2) with three points and can still dream of a place on the podium.

It’s four from four! At the end of a match in which they trailed for only nine minutes, the AS Monaco players completely turned the match around to win with authority in Rennes (3-2). Hoping to continue the team’s current good form, Philippe Clement decides to play the same eleven as he had against Troyes, with one exception, as Kevin Volland claimed a starting place alongside Wissam Ben Yedder.

A stunning first quarter of an hour

The match got off to a strong start with AS Monaco giving themselves a first big chance with an off-target shot by Aleksandr Golovin, after a superb bit of collective play (2′). Unfortunately Rennes’ response was immediate and Flavien Tait opened the scoring with a header on Rennes’ first attack, on a cross from Hamari Traoré (1-0, 3′). Again the response was almost immediate, with a clever lob from Kevin Volland flashing just over Dogan Alemdar’s crossbar (8′).

But it was finally on a lightning-quick counter, with a fine pass from Aleksandr Golovin, that Vanderson managed to equalize with a shot with the outside of his right foot (1-1, 12′). Magnificent! It was his fourth assist this season in Ligue 1 for the Tsar, and his second consecutive after doing the same against Troyes. The pace of the match then dipped somewhat, despite attempts by Martin Terrier at one end (16′) and Wissam Ben Yedder, twice, at the other (19′, 39′).

The two teams thus went into halftime level, despite a last attempt that went high from the Rouge et Blanc captain (45′). The second half starts as strong as the first, with a very dangerous free kick from Benjamin Bourigeaud (47′). Luckily it went over the bar! A new period of cagy play followed, before captain’ Wiss gave AS Monaco the lead.

On a second ball from the head of Kevin Volland, the number 10 was unmarked, and beat Alemdar on a shot across goal (1-2, 57′). Moments later, Aleksandr Golovin missed scoring a killer blow, on a new run in behind the Breton defense (63′). The Monegasque awya end, once again full at Roazhon Park, was the made to be a bit nervy  before a superb save by Alexander Nübel  denied  Jonas Martin (72′). The Côte d’Azur side was holding firm and again thrilling the visitors’ section.

On a once again very fluid bit of play, Vanderson played in Myron Boadu at the back, who finished superbly from close range (1-3, 77′)! It was thus a real show of force from Philippe Clement’s men, who were well on their way to beating Stade Rennais after the hosts had gone 7 games without defeat, including six victories. A header by Serhou Guirassy at the far post came to nothing (89′), and  it was even Myron Boadu who was close to making the score a little more convincing on a cross from Volland (91′).

Sofiane Diop nevertheless would concede a penalty that Martin Terrier converted (93′). This goal, however, did not change anything, since the Rouge et Blanc had obtained victory by showing their character (3-2). We will have to show at least as much of the same Wednesday evening (7 p.m.), to keep going as well play the Derby against Nice, a match which gives us a further chance of our dreaming of reaching the podium.