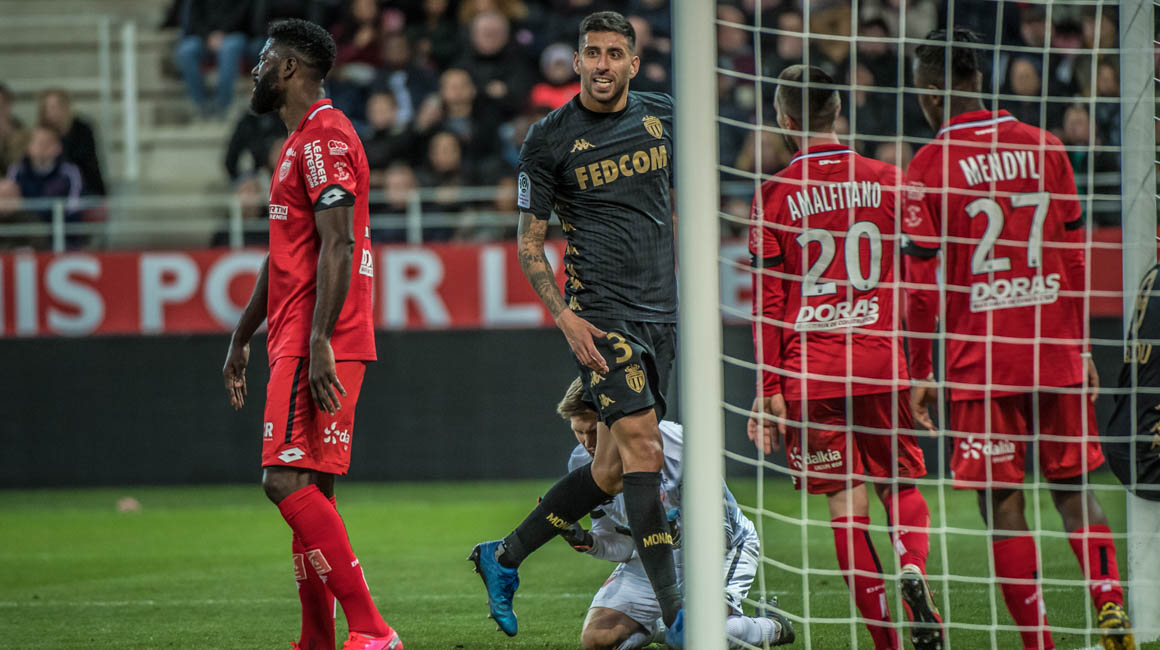 At the end of a difficult match, the Red and Whites avoided the Dijon trap at the Gaston-Gérard and came back with a draw (1-1). Guillermo Maripan equalized near the end of the match for AS Monaco, allowing his team to claim their fourth consecutive match without defeat.

Facing a Dijon side who were unbeaten at home for 10 games, the players of Robert Moreno did not have an easy task this evening in Burgundy. In the reverse fixture, it was only by the smallest of margins that Monaco won at the Stade Louis II (1-0) thanks to a goal by Aleksandr Golovin, who was suspended this evening. The start of the match was marked by by Dijon’s Chouiar being stretchered off after a collision with Badiashile. The Reds and Whites were the first to be dangerous and take their chances, first through a Ben Yedder free kick in the 9th minute. The hosts then proceeded to try to take advantage of the speed of Tavares but the Cape Verdean didn’t manage to put his attempts on target (12th, 18th).

No one finds the breakthrough

Monaco then takes the upper hand over its opponent and keeps the ball. The most dangerous opportunity of the first period came in the 27th minute, when Jovetic played in Slimani on the left side. The Algerian shot but Runarsson pushed it behind for a corner. The two teams then played more cautiously for a long time and were reticent in their attempts to reach goal. Ten minutes later, Mavididi collided with Lecomte who did well to cover up a loose ball on the ground. Shortly thereafter, it was Slimani, played in by Ben Yedder, who went got on to a ball over the top but Runarsson once again intervened with his feet. At the break, the twenty-two players headed to the locker rooms goalless.

Returning from the locker room, Bakayoko had an effort  from twenty-five meters that didn’t present much danger. His attempt inspired Slimani on the follow-up, though; the Algerian was again found by Ben Yedder, dribbling at the Dijon goalkeeper into the box but his shot was off target. The Red and Whites will soon regret this missed opportunity, as a few seconds later, Mama Baldé opened the scoring for the Burgundians following a bad pass by the Monaco defense. The visitors, however, did not give up and continued to attack the opposing goal. In the 66th, Slimani found Ben Yedder on the turn. The French international got into a  shooting position but his shot was off-target, and the assistant referee signaled offside.

Maripan and Lecomte are decisive

Monaco’s efforts would be rewarded in the 79th minute: on a good free kick near the area, Adrien Silva found the head of Slimani. Runarsson made a vital block but it fell to the feet of Maripan. The Chilean, ever the opportunist, pushed the ball into the empty goal and scored his second goal of the season. Slimani’s attempt three minutes later failed to give the visitors an advantage, as the DFCO goalkeeper intervened again. The match came to life in the last minutes on both sides: Badiashile made an important block at the feet of Amalfitano who had a chance on goal after a slaloming run (87th). Then, Cadiz, unmarked at six meters, missed his header.  Again, it looked to be match point for the Dijonnais in the 90th minute when Tavares had a one-on-one against Lecomte. The Monegasque goalkeeper pulled out a massive save which allowed the Reds and Whites to clinch the draw at the Gaston-Gérard.