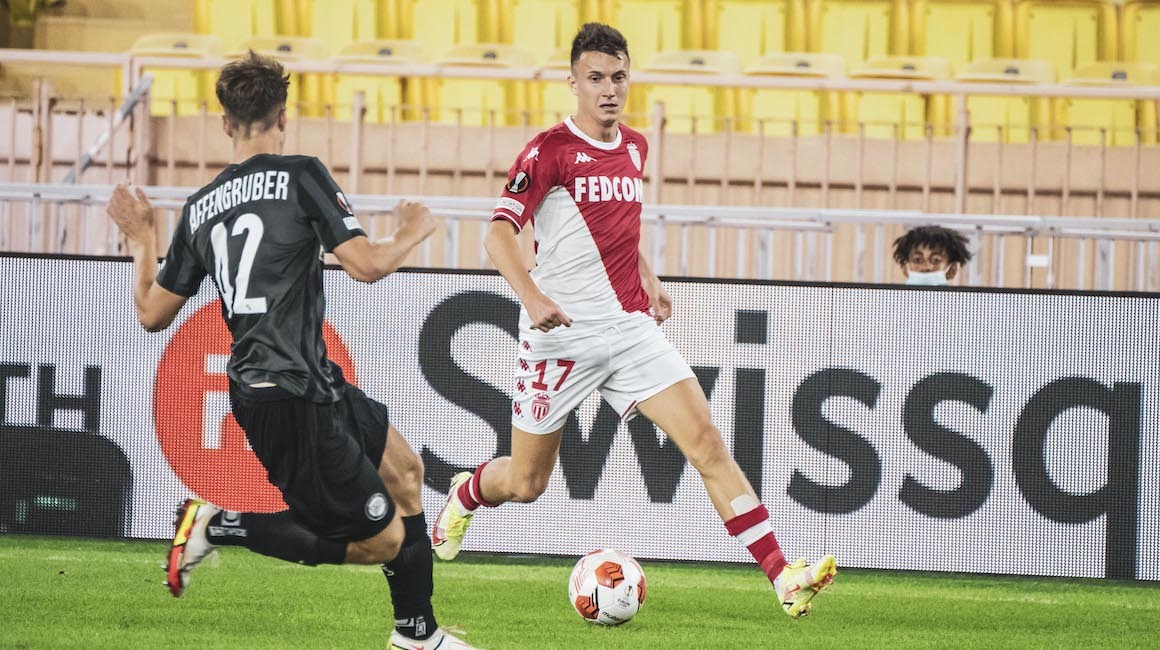 Scorer of the opening goal and Derby MVP this Sunday against Nice (2-2), the Russian winger took the time to speak on his start to the season and that of AS Monaco with the press, the day before a visit from Saint-Etienne (7 p.m.).

He is the second most-capped player in AS Monaco’s current squad. Goalscorer and MVP in the 101st Cote d´Azur derby this Sunday against Nice (2-2), Aleksandr Golovin celebrated his 100th appearance for the Rouge et Blanc (15 goals, 19 assists). It’s an impressive run of longevity for the “Tsar”, who also had an assist against Sturm Graz to open the team’s Europa League campaign. The Russian international winger (43 caps, 5 goals) will now face AS Saint-Etienne this Wednesday at the Stade Louis-II (kick-off 7pm). He spoke to the media on the eve of the match. 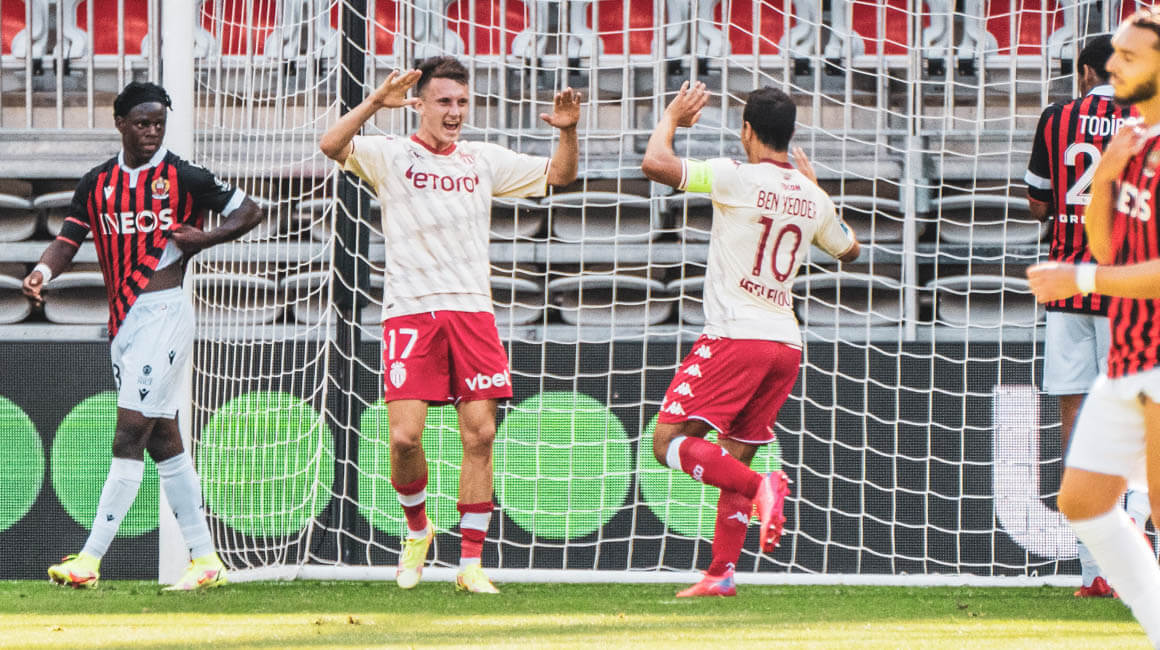 I'm happy to have scored, and to have reached this 100 match mark with AS Monaco, because I had already reached it with CSKA Moscow, so I'm proud to have accomplished the same in Rouge et Blanc.
Aleksandr GolovinAttacking midfielder, AS Monaco

The milestone of 100 matches in Rouge et Blanc

Obviously I would have preferred that we won the derby against Nice, because we know the importance of this match for the Club and the supporters. Nevertheless, I’m happy to have scored, and to have reached this 100 match mark with AS Monaco, because I had already reached it with CSKA Moscow, so I’m proud to have accomplished the same in Rouge et Blanc.

The development of his game

Before, in my last season at CSKA and my first season in Monaco, I thought I needed to play more in  midfield, in the heart of the game, to be a creator. Maybe I exhausted myself a little too much sometimes running in this role. I feel that my game has changed since last season. Today I have to be in the penalty box more often, closer to the opponent’s area so as to be more decisive because I have to score more and provide more assists.

A fourth season at AS Monaco

I think I have a role to play in pushing young players, since I am indeed one of the oldest (the team’s most-capped player behind Djibril Sidibé -ed). I feel this responsibility. I try to give as much as possible, to play 100% every game, and to serve as an example. 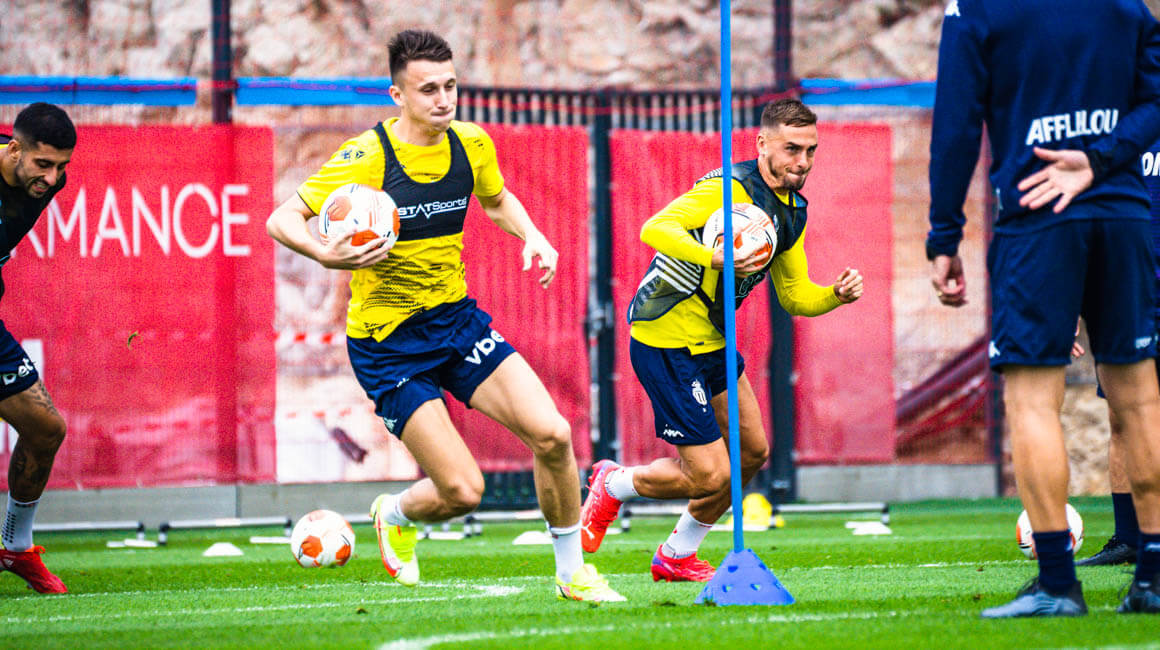 I think I need to be more supportive of young players, on and off the pitch, and also to be more assertive. To be a leader, an example, that is what I aspire to.
Aleksandr GolovinAttacking midfielder, AS Monaco

His role with the team’s younger players

When I was a young player, I too needed more time to understand things, to process the coach’s instructions. Niko Kovac is quite patient and gives them time to express themselves. I think I need to be more supportive of young players, on and off the pitch, and also to be more assertive. To be a leader, an example, that is what I aspire to.

On the team’s current form

I think we need to be focused on our play. Our start to the season is not good enough, that’s for sure. We know we have to be better from the first to the last minute. But we’re playing better game after game, and I’m pretty confident moving forward.

For us "Golo" is a guarantee, he is very important to our style of play. We have to make sure he is in good shape. I am very happy with him, he is a very intelligent lad; he's a little introverted and does not think of himself as a star.
Niko Kovacon Aleksandr Golovin

Being an icon in Russia

It’s not pressure I feel from my compatriots, but I would say there are a lot of expectations. I take this as support, because I know that a lot of Russians watch my games and follow the performances of AS Monaco on TV.

His inspirations when he was young

I hope to become an important player in the history of my country, following the great players of the past. When I was young, I really liked Andrei Arshavin. It is true that he was a very aggressive player, who was always trying to get stuck in and find good positions. I take a lot of inspiration from him.