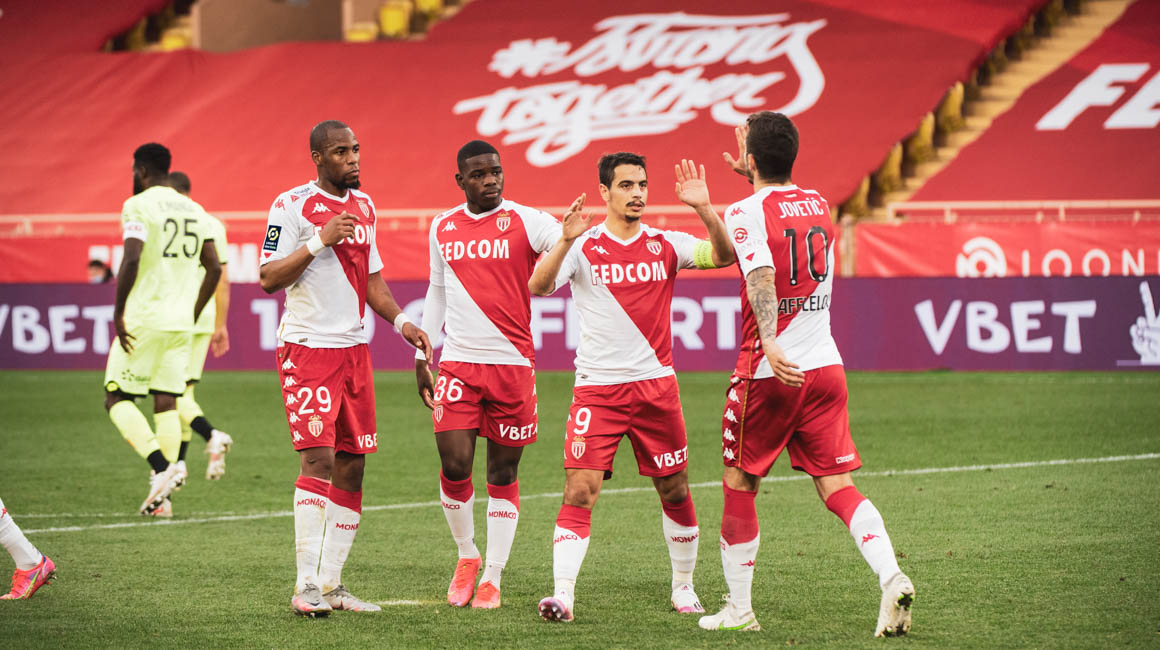 For the 32nd round of Ligue 1, Niko Kovac and his Rouge et Blanc sprang to life in the second half and won 3-0 against Dijon, guaranteeing one more week on the podium.

To face Dijon, the Croatian technician set his side out in a 4-2-3-1 marked by the returns of Sofiane Diop and Ruben Aguilar on the flanks with Kevin Volland having been ruled out at the last minute. For Dijon, David Linarès decided to field a 5-3-2, in which one found the former AS Monaco man Aboubakar Kamara, leading the line. From the start of the match, the Rouge et Blanc did well to keep the ball and Saturnin Allagbé was forced into a save in the game’s second minute by a powerful strike from Youssouf Fofana from 20 meters. 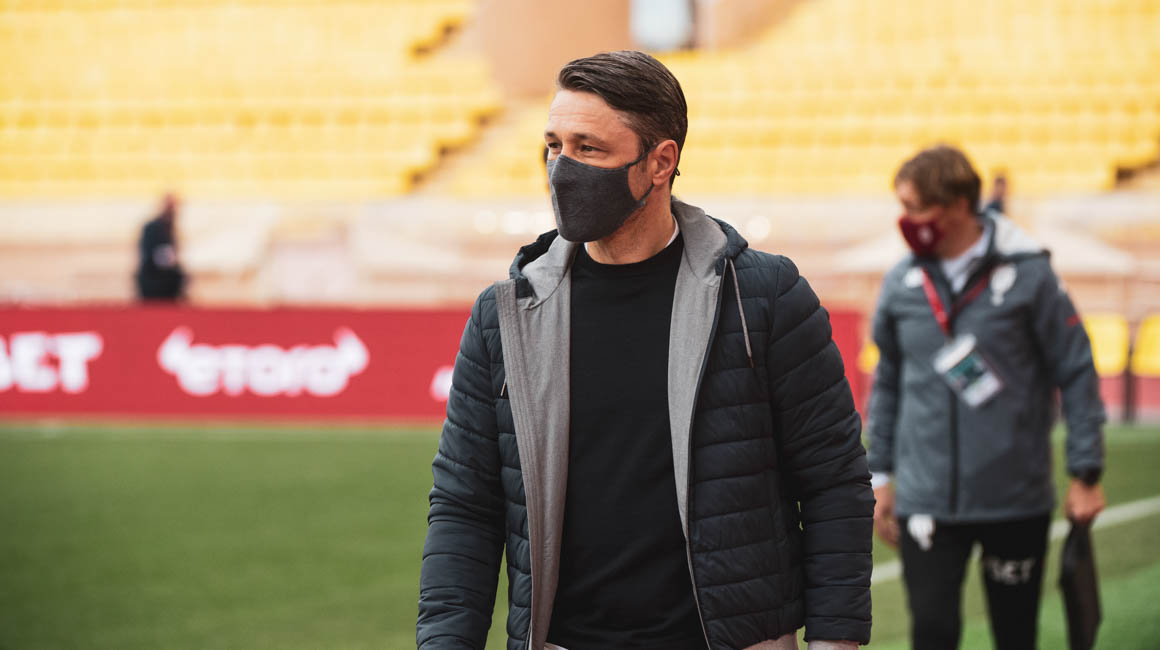 A sloppy first half

Dominant but somewhat sloppy in their play, AS Monaco had difficulties creating situations against the low block of the Burgundians. The opener seemed to have come as Guillermo Maripán thought he had opened the scoring from a free kick which was well-taken by Aleksandr Golovin. But the goal was ultimately flagged off for offside (24th), while, a few moments later, Stevan Jovetić failed to beat the DFCO goalkeeper (27th).

Dijon were mainly intent on blocking AS Monaco’s attempts to build play, but did manage to create a moment of danger when Axel Disasi lost the ball. The defender’s mistake was without consequence, however, thanks to an intervention by Benjamin Lecomte with his foot (38th). Despite having 65% of possession, opportunities were rare for the Monegasques side and the first period did not seem to be to the liking of Niko Kovac who made two changes at the interval, with Wissam Ben Yedder and Cesc Fàbregas coming on. 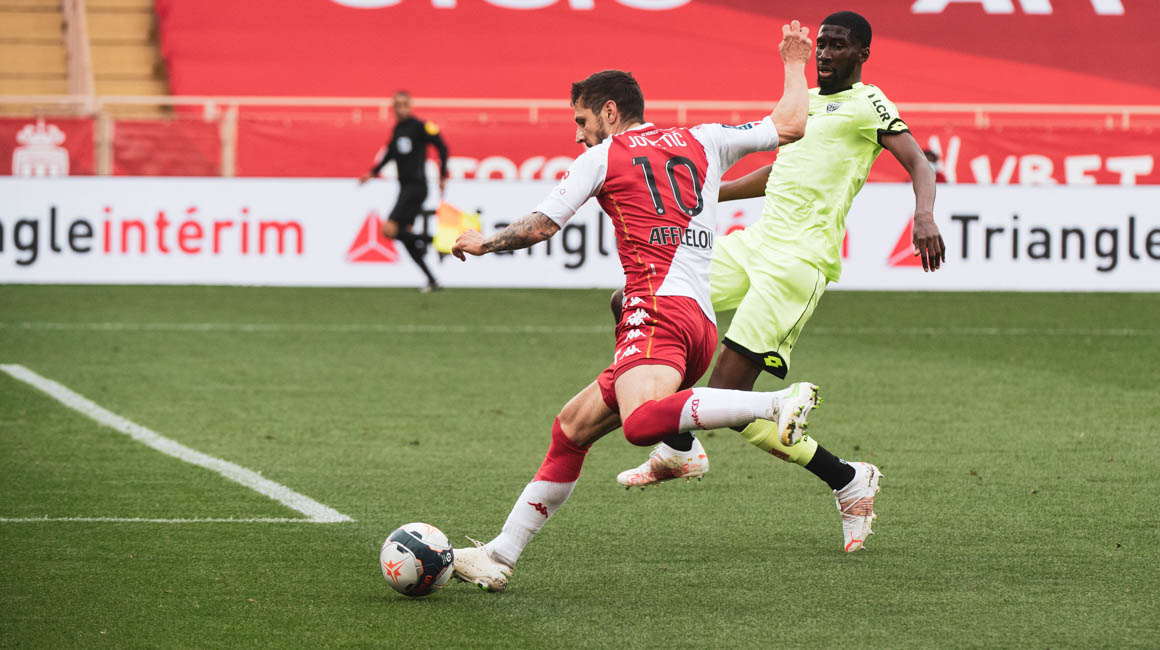 A similar scenario to the match against Metz

The French international wasted no time in making his mark on the match and was awarded a penalty after a foul by Ecuele Manga (49th). He shot to the right of the goalkeeper, but the Dijon man kept out the Monaco captain’s strike, but it wasn’t enough to prevent a goal as Stevan Jovetić  tapped in the rebound (50th) to score his fifth goal of the season, and of 2021. The Rouge et Blanc were looking much better and Caio Henrique came close to scoring the 2nd goal shortly thereafter. Played in on a long ball by Guillermo Maripán, the Brazilian fullback hit a powerful shot deflected by Saturnin Allagbé (57th), the Dijon ‘keeper again proving decisive.

Although they rarely had the ball in the Monegasque half of the pitch, DFCO came close to equalizing just after Allagbé had kept out Henrique, but an attempt by Mama Baldé landed in the stands of the Stade Louis-II (59th). Pressing high up the pitch, Axel Disasi, captain at the start of the match, and his teammates, looked to exploit every ball lost in the opposing half. On one of them, Aleksandr Golovin played in Wissam Ben Yedder, who, thanks to a subtle finish, doubled the lead (63rd). AS Monaco continued to push and on yet another run forward from Caio Henrique, the Brazilian found the Russian international right in the middle, whose shot from close range was unfortunately right at the Beninese goalkeeper (70′). 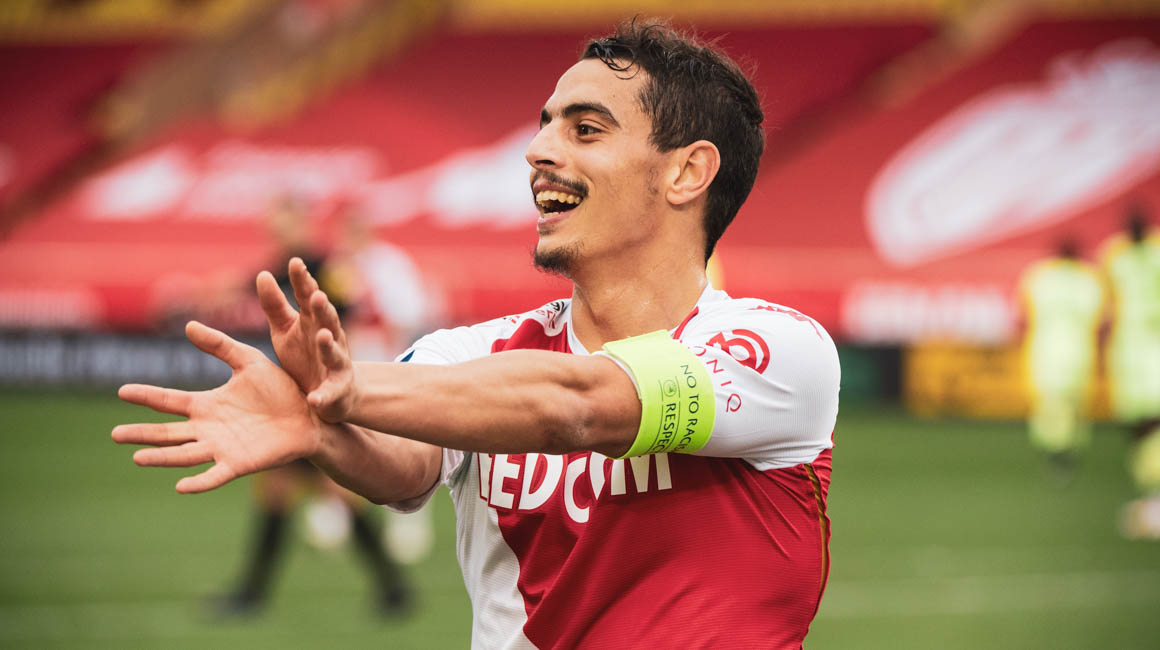 In the last quarter of an hour, Niko Kovac breathed new life into the Monegasque XI with the introductions of Krépin Diatta, Eliot Matazo and Fodé Ballo-Touré, replacing Cesc Fàbregas, who came off injured. The French fullback was decisive almost immediately upon his entry into the game, where he won a penalty that was duly converted by Ben Yedder (90th), his 17th goal of the season and his sixth double in Ligue 1.

In a one-sided second half (7 shots on target), AS Monaco therefore gave themselves a third straight victory and their fourth clean sheet in a row, Benjamin Lecomte’s sixth in his last seven outings. Thanks to this win, the Rouge et Blanc consolidated third place, and are now on 65 points for the season.