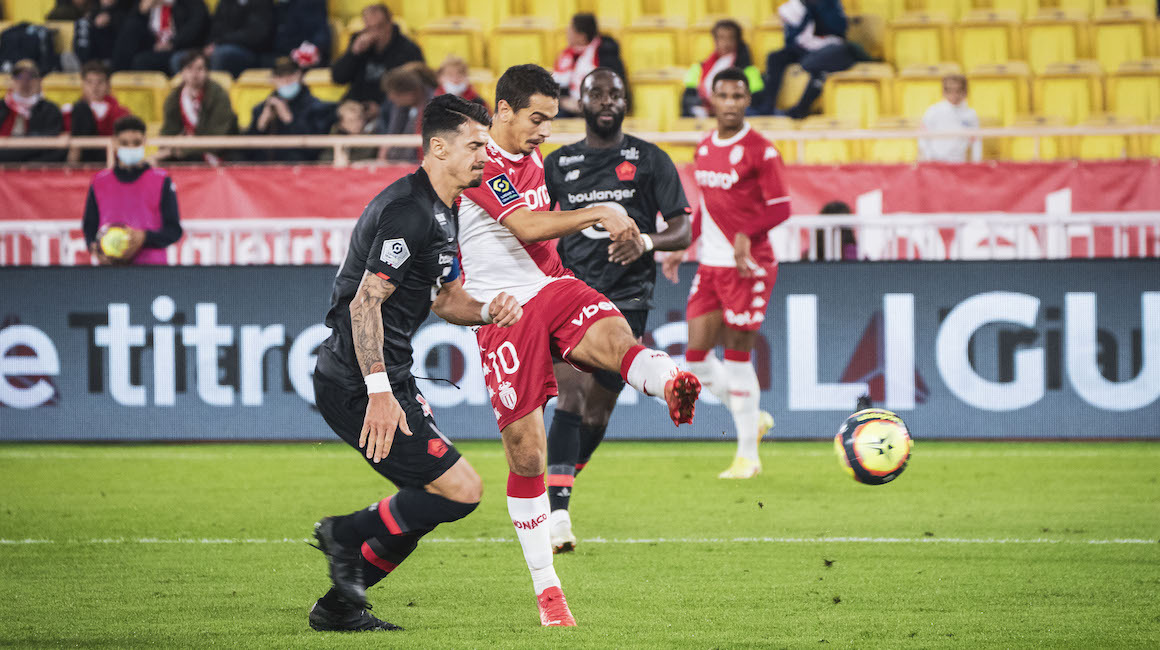 At the end of a match that looked to end in a very unfavorable fashion for AS Monaco, the teammates of Wissam Ben Yedder, who scored his 50th goal in the Diagonale, obtained a deserved point against the reigning French champions (2-2).

On what was National Day in the Principality and also the birthday of former President Jean-Louis Campora, Niko Kovac fielded his classic 4-4-2 hybrid. The only changes were a start for Krépin Diatta on the right wing and Myron Boadu lining up alongside Kevin Volland in attack. Unfortunately the match started very badly for the Rouge et Blanc, with a penalty conceded in the 3rd minute of play by Strahinja Pavlović, whom Jonathan David converted (0-1).

A very difficult start to the match

Despite a great opportunity to score from a free kick for the Monegasques, it was the Canadian forward who scored his second shortly thereafter, on a ball over the top (0-2, 7′). The Northerners even came close to netting a third goal through Jonathan Ikoné, who was denied by a remarkable save from Alexander Nübel (12′). The German goalkeeper who intervened to deny Jonathan David, who was again dangerous (18′). 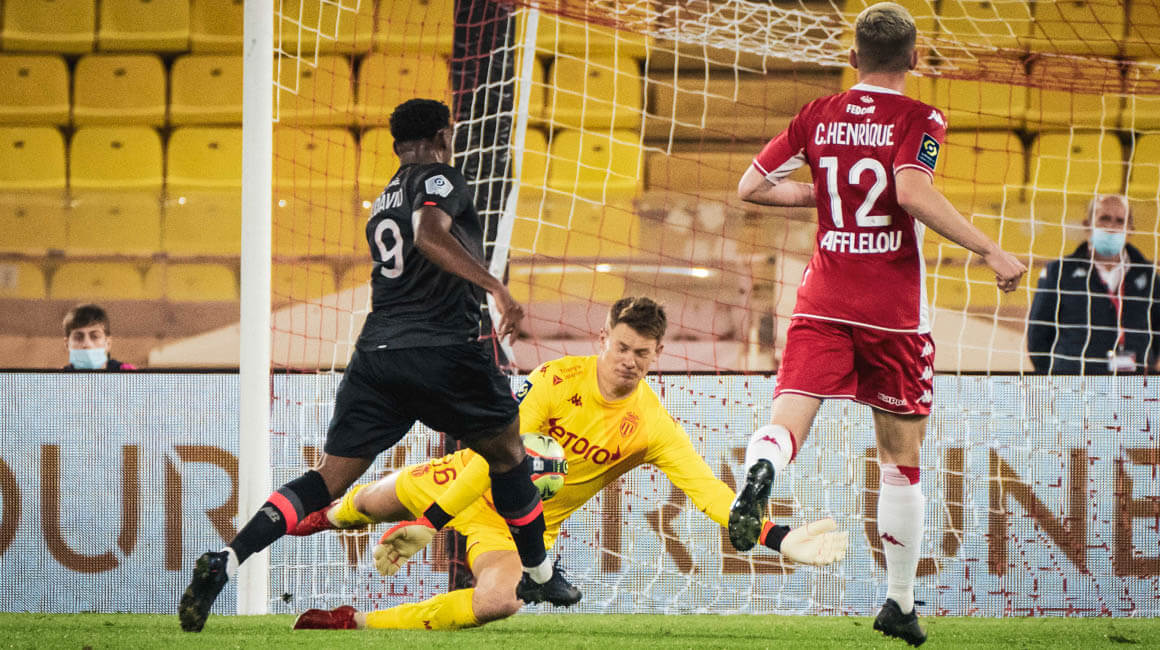 A response would come, though, especially in the form of a cross by Krépin Diatta, which was well taken by Myron Boadu on the counter (28′). It was then Sofiane Diop who announced himself with a powerful strike from 20 meters, which was slightly overhit (33′). Then came a chance for Aurélien Tchouameni, who was well picked out by Diop (35′). Unfortunately this growing into the game was not rewarded with a goal. And Alexander Nübel even saved his side again by winning a one-on-one against the ever-present Jonathan David (39′).

Fortunately, things clicked into gear for Youssouf Fofana and his teammates as they approached half-time. On a ball from from the Monegasque midfielder to Krépin Diatta, wide on the right in Lille’s penalty area, the Senegalese international scored his first goal of the season in Ligue 1 with his left foot (1-2, 41′). Finally, there was a reason for hope before returning to the locker room. 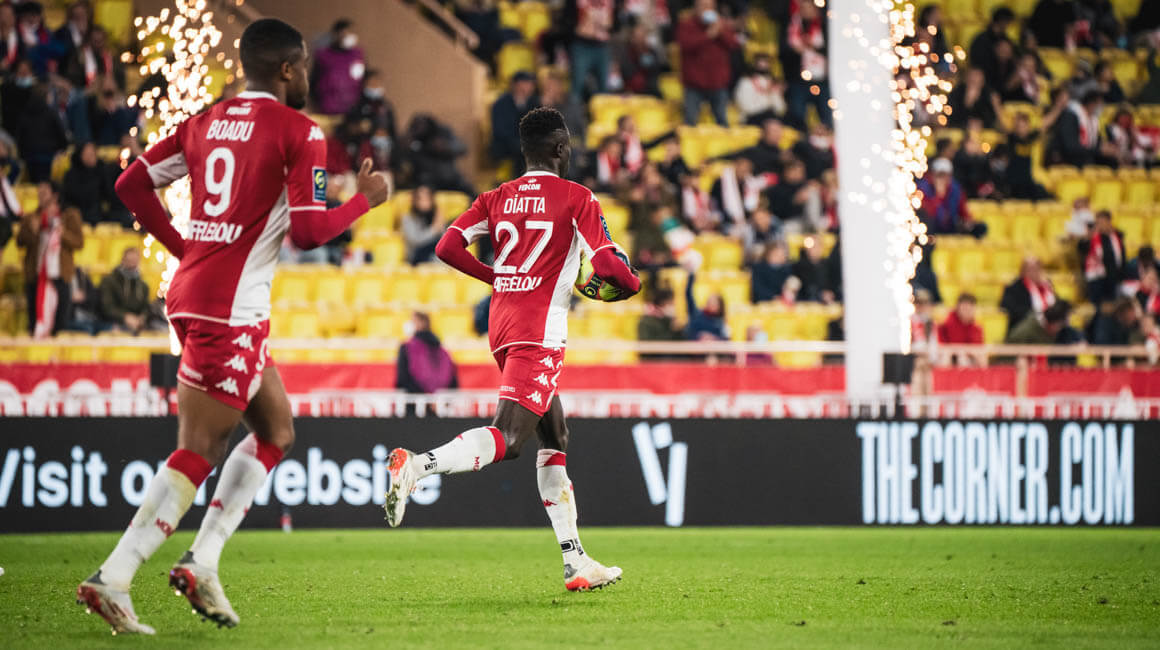 Besides, Niko Kovac’s men looked to come back with very good intentions. Kevin Volland was close to equalizing on a clever lob (48′), taking advantage of a mistake by Tiago Djalo, and then came a low strike finally gathered by Ivo Grbic (52′). Then it was the turn of Gelson Martins, who had come on at half-time in place of the injured Diatta, to graze the opponents’ crossbar (55′). Things were shaping up at the Stade Louis-II, where the Ultras Monaco 94, back in numbers, were making themselves heard.

Captain’ Wiss to the power of 50, saving the result

Axel Disasi was very close to beating Grbic with a powerful header on a superb cross from Caio Henrique (63′) before Strahinja Pavlović also had a chance (65′). The pressure is increasing on the LOSC goal, now with a new header by Kevin Volland on a cross from Wissam Ben Yedder (74′). Monaco again looked for an equalizer, this time on a powerful strike by Aurélie Tchouameni (76′). Unfortunately, things changed quickly just as a second goal seemed in the offing for Les Monegasques. 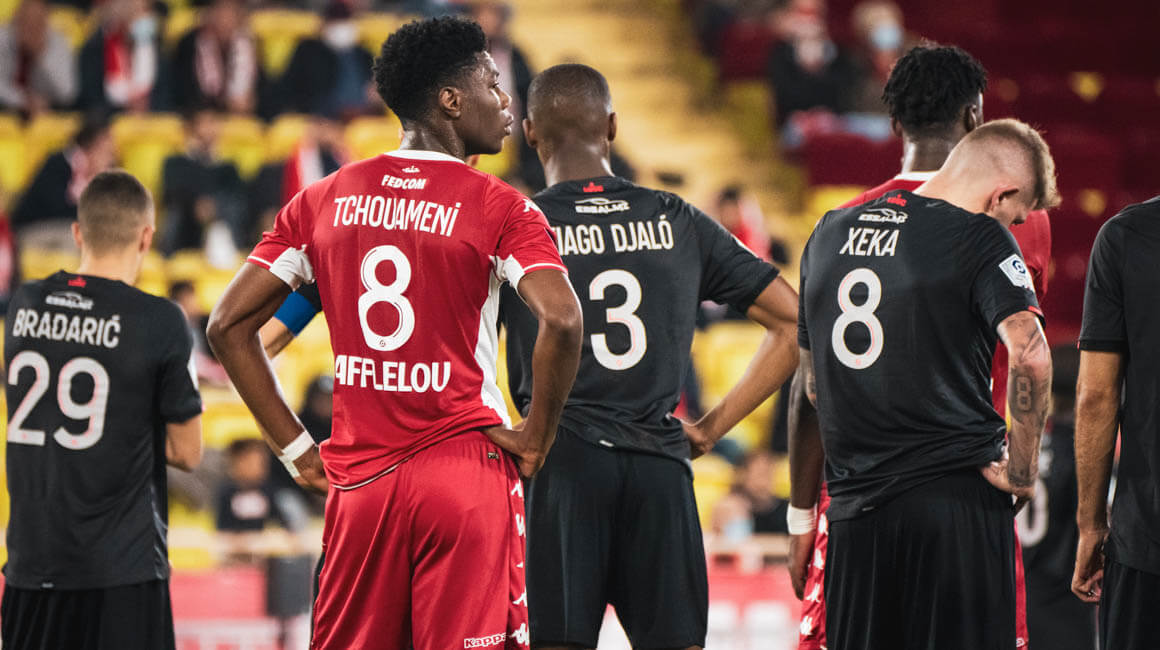 Mr. Willy Delajod gave Strahinja Pavlović  a second booking which brought  out a red card (78′). But fortunately, hope came again to Fontvieille, a pass from Kevin Volland, which the Rouge et Blanc number 10 sent into Gribc’s net (2-2, 83′). The miracle seemed underway, thanks to the Monegasque captain’s 7th goal in Ligue 1 this season, and his 50th with AS Monaco. It was also his eighth off the bench in 2021, at least three more than any other player in the Big 5.

Time to focus on Europe

A victory was even a possibility at the end of this match as Wissam played in Ruben Aguilar, whose whipped cross drifted out of bounds. Things ended in a draw (2-2), despite two final chances, on a strike from Yilmaz and a header from Djalo, which was well saved on his line by Alexander Nübel (93′). A point won with plenty of guts by our Monegasques, the team did honor to the Diagonale, despite what looked a very unfavorable situation. The team’s next match is this Thursday in the Europa League, with a visit by Real Sociedad to the Stade Louis-II (9 p.m.).