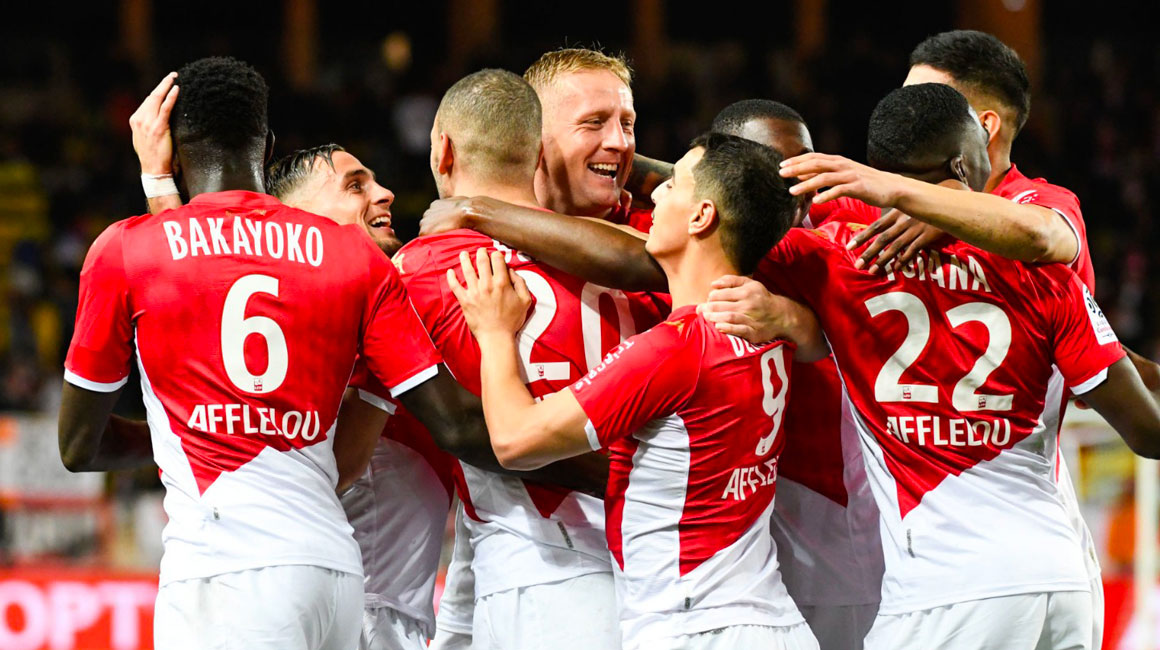 AS Monaco hosted the Montpellier Hérault Sporting Club this Friday to open the 25th matchday. As in Amiens a week earlier, it was Islam Slimani who gave the Red and Whites the lead after a match that was largely one-way traffic. (1-0).

At the start of this match, just two points separated AS Monaco (7th) from Montpellier HSC (5th). So it was thus two contenders for Europe who were set to do battle tonight on the pitch of the Stade Louis II for the 25th matchday. From the second minute, Golovin created a big chance alone in the area but the ball was miraculously blocked by the heel of an opposing defender. The first Montpellier attempt came in the 6th minute when Benjamin Lecomte worked twice to save Mollet’s attempts. Despite having a well-managed match in terms of possession, it took a quarter of an hour to see AS Monaco genuinely trouble Bertaud. In the 16th minute, Islam Slimani took a chance on a good pass from Wissam Ben Yedder, but the ‘keeper of the MHSC goal stood firm.

Consequently, the chances multiplied on both sides. In the 26th minute, a strong bit of combination play by the Red and Whites in the opposition half brought about an excellent through ball by Aguilar for Slimani. The Algerian had a shot but Souquet blocked the ball on his line. Golovin missed the frame in the follow-up. Savanier’s off-target header five minutes later would be the last chance for the visitors in the first period. Consequently, Monaco would gradually take control of the match and were close to opening the score on several occasions: first by Slimani with his header (35th), then Jovetic on a sublime curling shot (37th). Ben Yedder’s strike a minute later found only the side netting. Just before the break, Jovetic has his chance from distance, but Bertaud smacked the ball over his bar.

A ninth goal for Slimani

Back from the locker room, the breakthrough came from Slimani: on a Golovin corner in the 50th minute, the attacker rose higher than everyone and planted an unstoppable header into the Montpellier goal. This opening score knocked out Les Héraultais, who would never really come back in this second period. Jovetic tried his luck soon after (60th) but his shot went wide. A burst of pride, however, occurs when, following a scramble in the Monegasque area (65th), the ball fell back to Mollet’s feet, then to Yun, whose two shots were blocked. Monaco continued their domination and failed to double their lead in the 69th: Aguilar on the right side delivered a superb cross to Ben Yedder, but the French international preferred to leave the ball for his teammate Bakayoko. The latter struck a clear shot, but the ball crashed off the crossbar. The match was very close to being broken open.

Slimani created another dangerous chance in the 72nd minute by recovering a ball lost in the area; his pass to Ben Yedder was deflected by a Montpellier playr. The players of Michel Der Zakarian would make appearances from time to time in Monaco’s half, in particular  Camara with a header (86th), but far too rarely to worry Lecomte. In added time, Ben Yedder had a brilliant run into the opposing area and delivered a ball to make it 2-0 to Baldé, who had just come on. The Senegalese missed a point-blank shot and AS Monaco remained at the mercy of  a reply from the visitors. In the 93rd minute, Damien Le Tallec did not get his shot on target from the penalty spot. A few seconds later, Mr. Buquet signaled full time releasing the pressure on the hosts at the Stade Louis-II. AS Monaco won 1-0 and put pressure on LOSC and Rennes who will play on Sunday, respectively against Marseille and Reims.

Reactions Niko Kovac: "We will do everything to move higher" 18 April 2021, 21:48
See more articles
AS Monaco uses cookies on this website. With your agreement, we use them to access how this website is used (analytic cookies) and to adapt it to your needs and interests (customization cookies depend on your browsing and your browser). By continuing your browsing, you give us the permission to use them.
I accept Personalize