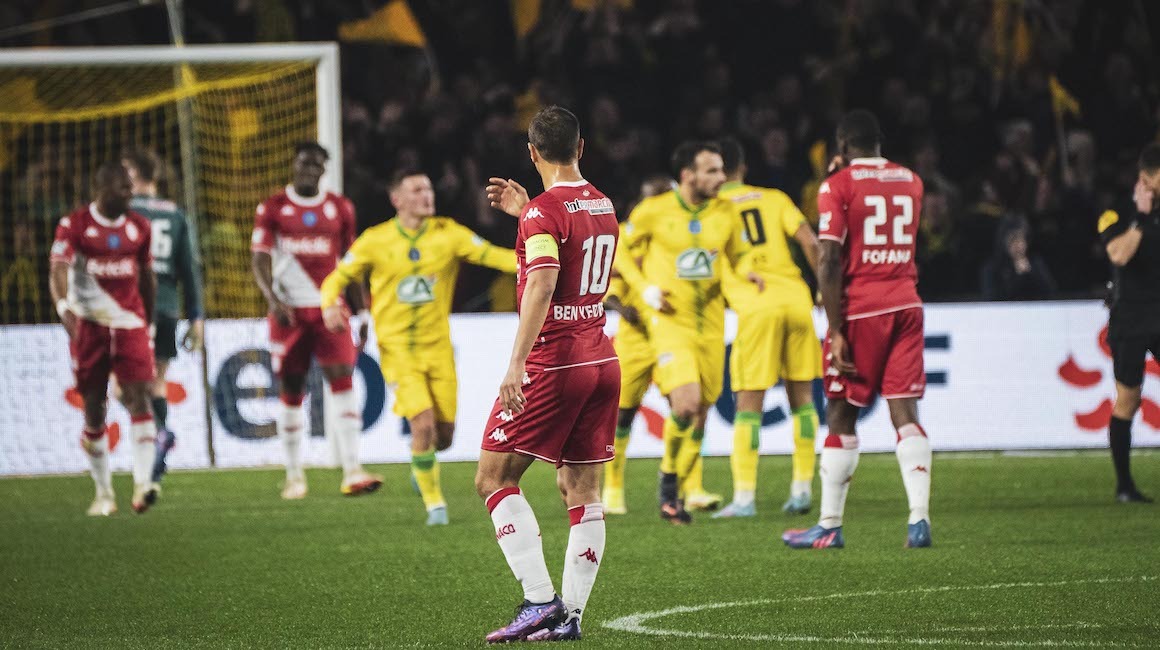 Despite a very impressive performance and an equalizer scored in the last quarter of an hour, the Rouge et Blanc lost in the Coupe de France semifinal against FC Nantes, after a penalty shootout (2- 2, 4-2 on penalties).

They have not been unworthy, far from it! Authors of a very fine match against Nantes, the players of AS Monaco unfortunately did not manage to punch their ticket for the Stade de France, losing a penalty shootout in this Coupe de France semi-final (2-2, 4-2 penalties). To start this big match, Philippe Clement decided to start a very competitive eleven, lining them up in a 4-2-3-1. 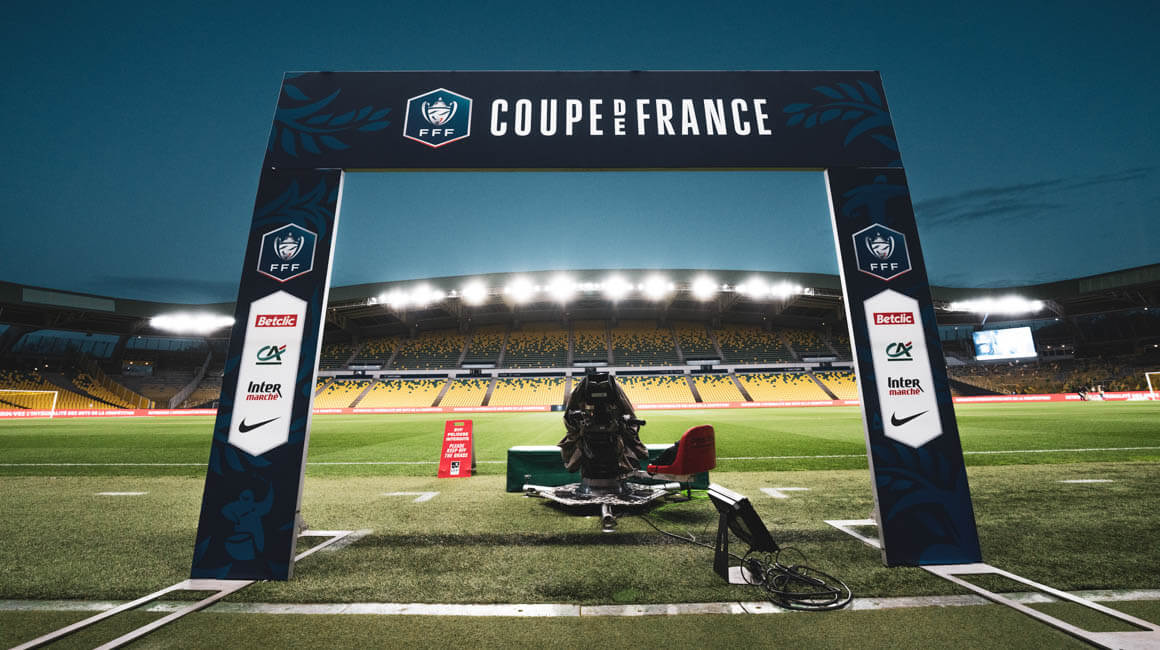 The opening salvo from “Memo”

The match kicked off with a bang, in what was an electric atmosphere at La Beaujoire, and with a full Monegasque away end! The first chance came to Randal Kolo Muani, whose strike was cleared off the line by Djibril Sidibé (1′). There was an almost immediate response from the Monegasque captain, however, who shot from the edge of the area (6′), but it was finally on set piece that the deadlock would be broken.

Vanderson would pick out Guillermo Maripán perfectly with a free kick from range, who scored with a fine header (1-0, 12′). AS Monaco were again dangerous on a corner by Caio Henrique, met in the air by Axel Disasi, but his effort was blocked (19′). Unfortunately Djibril Sidibé would level things between the two teams with an unlucky bit of fate, diverting the ball into his own goal (1-1, 21′). 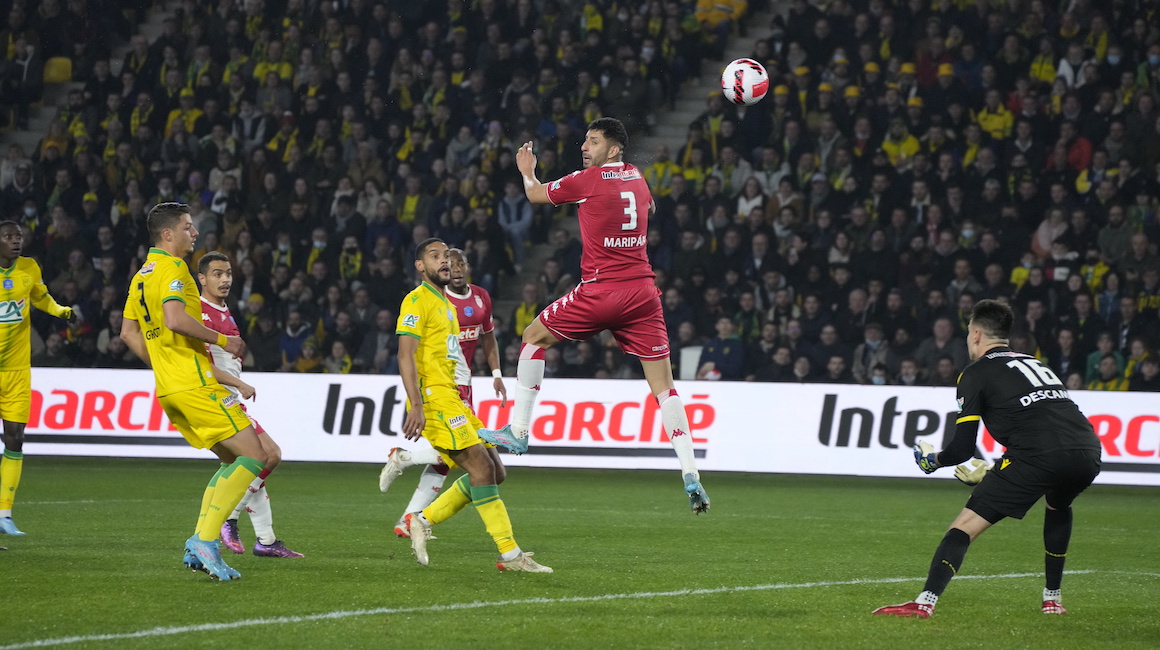 The Rouge et Blanc reacted instantly with another attempt from Wissam Ben Yedder (26′). Then came a pair of chances: Gelson Martins first came up short against Rémy Descamps, who could only clear the ball to Youssouf Fofana, whose volley flashed just wide of the post (31′). Nantes would then try their luck before half-time, but Moses Simon’s direct free kick (40′) was blocked by the wall.

Then there was a chance for Ludovic Blas, who made the stadium erupt after a magnificent pass from Kolo Muani (45 + 1′), but his shot was off-target. The first half, which was very balanced, finally ended on level terms. On returning from the locker room, their were fewer opportunities. The first Monegasque chance would come on a ball headed on by Wissam Ben Yedder past Rémy Descamps, which Vanderson was very close to winning (58′). 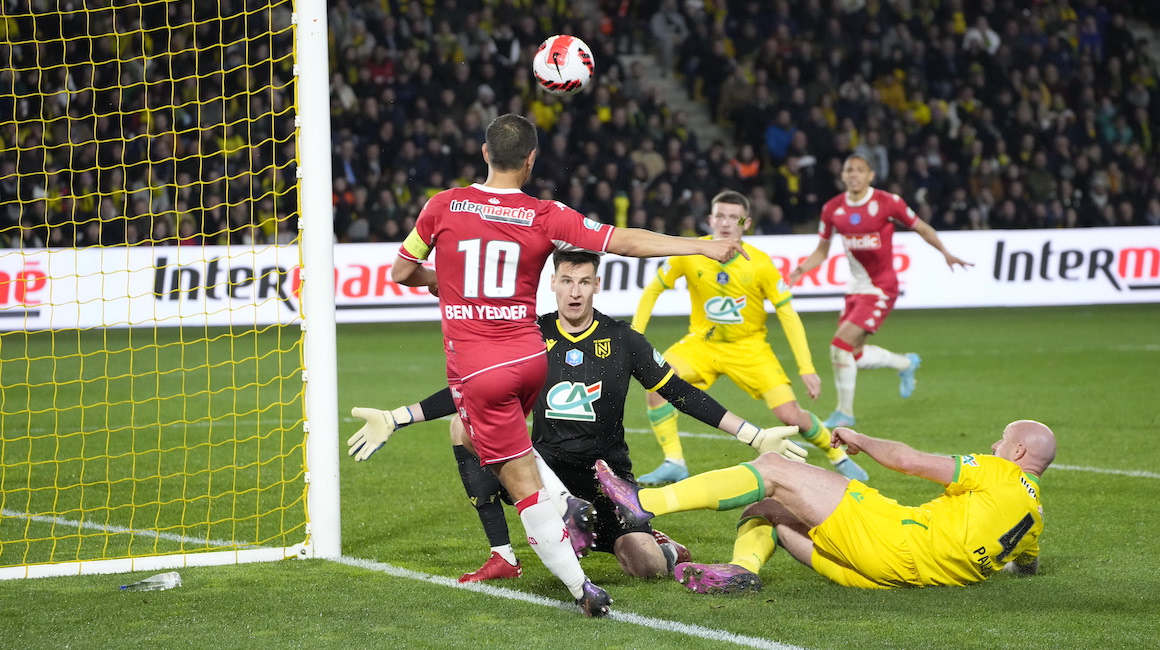 A decisive return for Myron Boadu

Alexander Nübel, who had little to do until that point, would then keep out a header from Randal Kolo Muani (69′). The German goalkeeper was again impeccable on a powerful strike from the left side by Moses Simon (72′). Then came the moment chosen by Philippe Clement to bring on Myron Boadu, back from injury, and Kevin Volland. Unfortunately, on an action initiated by the Nigerian winger Simon, Samuel Moutoussamy would give the advantage to FC Nantes after a first shot by Kolo Muani was blocked (2-1, 74′).

But then, this semi-final decided to become completely wild, as Myron Boadu equalized moments later, again with a header, on an inch-perfect cross from… Vanderson (2-2, 76′)! We then neared a penalty shootout, but Alexander Nübel would take the opportunity to impress again, keeping out an attempt from close range by Sébastien Corchia (90′).

WHAT A SAVE BY NÜBEL!

A cruel end to the match

The two teams would therefore decide the match from the penalty spot, on the Monegasque end. It was an end that did not smile on the Rouge et Blanc, who would unfortunately lose the shootout, 4-2. And so ended the team’s Coupe de France run, which will see them quickly be back in league action, with a big match set against Marseille on Sunday evening (8:45 p.m.). Well done to the team for this brilliant cup run!