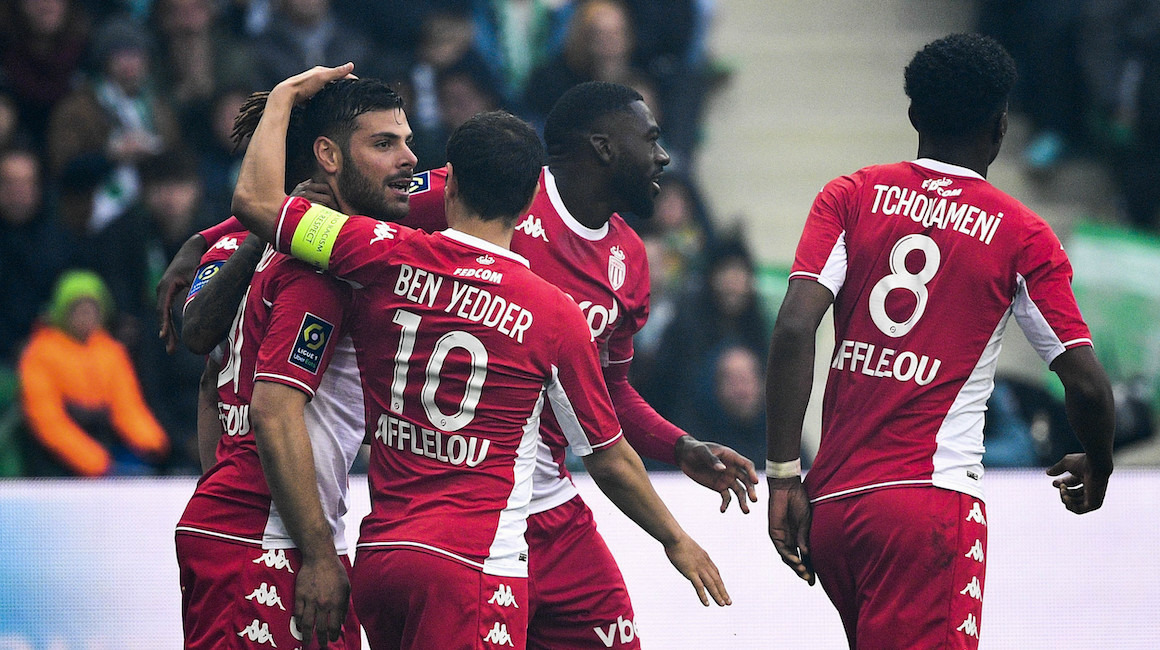 At the end of another impressive display, our Rouge et Blanc had a sixth victory in a row against Saint-Etienne at the Stade Geoffroy-Guichard (4-1), to temporarily climb onto the podium.

They are unstoppable! Once again very solid defensively and very clinical in attack, the AS Monaco players made it six victories in a row in Ligue 1 away to Saint-Etienne. In an attempt to ride the current wave of success, Philippe Clement decided to opt for the same starting lineup as against Rennes and Nice, with one exception. Gelson Martins replaced Ruben Aguilar, who was ill, while Vanderson slipped into the right back position. 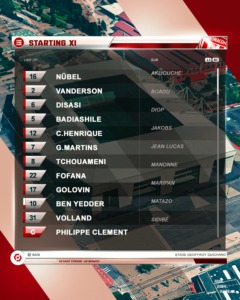 Some big opportunitites, and some fine finishing…

The match started very strong with a first shot from range by Kevin Volland from the kickoff (1′). The German striker  was in action a few moments later against Paul Bernardoni, who turned his powerful shot to the feet of Gelson Martins, who failed to  finish (3′). It was a matter of mastery from the Monegasques in this first quarter of an hour, even if Denis Bouanga was a threat for Saint-Etienne. Alexander Nübel was even forced to save well on a dangerous cross from Les Verts’ winger (16′).

It was again the Gabon international who hit a powerful attempt from the right that the Monegasque goalkeeper managed somehow to capture (19′). But the goal would ultimately come for the Rouge et Blanc, who opened the scoring with a superb three-way action between Aurélien Tchouameni, Caio Henrique and Wissam Ben Yedder, who finished from close range (0-1, 23′)! It was the twentieth goal in the top flight for our captain, found in fine fashuon by the Brazilian, who had his seventh assist.

Kevin Volland doubles the lead…  for a moment

The Stade Geoffroy-Guichard, full of energy since kick-off had grown cold. And it was even more so three minutes later, when the other member of Yedderland, Kevin Volland, nipped in ahead of Paul Bernardoni to finish a good pass from Gelson Martins (0-2, 26′). What a show by AS Monaco! Yvan Maçon nevertheless tried to trouble Alexander Nübel on a shot across goal, but it was well stopped by the German (29′).

Aurélien Tchouameni’s teammates had control of the debates, but Mr. Bastien Dechepy, the match referee, whistled for a penalty on a tackle by the Monegasque midfielder. It was converted by Wahbi Khazri, who wrong-footed Nübel (1-2, 44′). It was too bad, because the visitors’ domination was until then unbroken, and on the stroke of halftime..

The helping hand of fate

The second period started without Gelson Martins, off through injury, and at a slower pace. The first strike, without danger, was from Timothée Kolodziejczak, who intervened in the 55th minute. The Saint-Etienne defender was then unhappy in his penalty area, since he turned in a cross from Ismail Jakobs into his own goal (1-3, 61′). It was terrible for AS Saint-Etienne, who once again suffered under the clinical play of Philippe Clement’s men, who seem to. be currently untouchable.

The defender of Saint-Etienne makes it 1-3 with an own goal!

Events took another turn, when the game was suspended due to the use of pyrotechnic devices (66′). But the safety of the players was well ensured for the resumption of the match, and the referees, in connection with the two teams and the local authorities, decided to restart the match after a break of more than 30 minutes. Kevin Volland immediately found himself in a striking position, but it was off target (68′). This was followed by Myron Boadu hitting Paul Bernardoni’s post after a nice solo run (69′)!

A fine attacking display to reach the podium!

The waves continued to batter the goal of Les Verts, as the two attackers failed to add to the score on two very fine chances, following a corner from Caio Henrique (70′). There was no more success on a free kick by Youssouf Fofana (73′). But the Monegasques did not loosen their grip, and it was finally Myron Boadu, after an impressive action orchestrated by Vanderson and Volland, who scored from six meters on a perfect cross by Ismail Jakobs (1-4, 78′).

The impressive final score would remains there, despite some reaction from the locals, especially on a last free kick by Ryad Boudebouz (91′). AS Monaco have made it six wins out of six, the best current run in the Big 5 leagues, which allows Philippe Clement and his men to temporarily climb to the elite podium. It’s a position that will have to be defended Sunday at the Stade Louis-II against Angers (3 p.m.). DAGHE MUNEGU! 🇲🇨