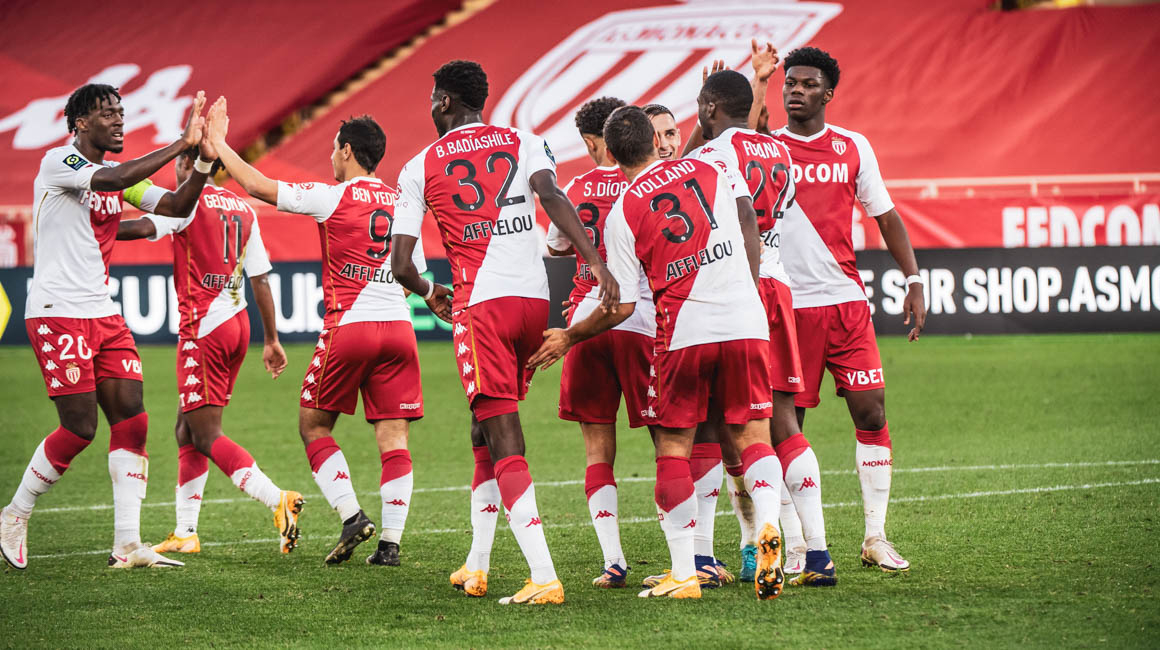 For this match against the Gard club, Niko Kovac decided to start with the same eleven as had started the second half against  Paris Saint-Germain, with Cesc Fàbregas playing in support of Kevin Volland, who was deployed as a lone striker in 4-2-3-1 without Wissam Ben Yedder, only just back with the squad this week in training. In full confidence after three straight victories in Ligue 1, the Red and Whites started the match with great attacking ambitions. From the first minute of play, Cesc Fàbregas was played in behind by Ruben Aguilar, but unfortunately without success.

Shortly thereafter, Caio Henrique combined with Gelson Martins who manages to get a shot away. Unfortunately his attempt drifted past the left post of Baptiste Reynet (3′). After this chance, the match took on the character of cautious observation between two teams who did not want to take any risks defensively. However, on a recovery high up the pitch from Sofiane Diop, Ruben Aguilar again found Gelson Martins in the Nîmes area. The deflection by the Portuguese winger fell to Cesc Fàbregas, who failed to open the scoring on a shot which was well anticipated by Baptiste Reynet (16′).

It was a match without any strong chances, until a new Monaco attack. Sofiane Diop, him again, recovered the ball at the edge of the area. With a subtle touch, he broke away from his marker and hit a nice volley into the bottom of the Nîmes goal (1-0, 19th). It was the third goal of the season in Ligue 1 for the Rouge et Blancs‘ midfielder, already having been a scorer against Nantes and Nice. A great start to the game was duly rewarded for the men of Niko Kovac, who remained very committed and active.

A one-sided first half

The opening of the scoring was then marked by a slight stop in the rhythm of the match, until half an hour into the game. Kevin Volland came close to meeting a cross with his head (33′), before Gelson Martins’ overhit cross in front of the Nîmes goal (35′). A good free kick was even obtained by Cesc Fàbregas at the edge of the opponent’s area, but Youssouf Fofana’s attempt did not yield anything (37′). A mistake by Pablo Martinez a few minutes later almost set Kevin Volland off on the break, but a moment of intervention from the attentive Baptiste Reynet prevented the German forward from scoring his 5th goal of the season.

On a well-struck cross from Cesc Fàbregas, Ruben Aguilar gave himself the last chance of this first half (45′), one which was largely dominated by AS Monaco, with 76% possession of the ball and nine shots (none for Nîmes). Wanting to get back into the match, Jérôme Arpinon’s players returned from the locker room with completely different intentions. Just after the restart, Haris Duljevic had an angled effort from the edge of the box, which was dealt with by Vito Mannone (52 ‘). It was a chance to which the Red and Whites responded immediately.

Kevin Volland was very close to scoring from a magnificent ball from Ruben Aguilar in behind the Nîmes defense (55′). The German center forward was then again very close to shaking the nets on a cross by Sofiane Diop, well picked out by Youssouf Fofana (56′). But as the hour mark drew near, Les Crocos were on the verge of breaking through the Monaco defense. Vito Mannone, calm off his line, grabbed the ball from a header by Lucas Deaux (59′).

Then came the moment that Niko Kovac chose to take off Cesc Fàbregas and put on Wissam Ben Yedder. The captain was not long in making his presence felt, with a header that narrowly missed the goal of Baptiste Reynet (62′). Shortly after, the match changed irrevocably following a mistimed tackle  from behind by Lucas Deaux on Sofiane Diop (66′). At first sanctioned with a yellow card, the Nîmes midfielder eventually would receive a more severe sanction from Mr. Gauthier, after consulting VAR (69′).

The duo of Volland and Ben Yedder remain prolific

Outnumbered, Nîmes Olympique were finding themselves cut in two and left spaces at the back. Ruben Aguilar, getting forward well on the right flank, took the opportunity to send a super cross in for Gelson Martins, who scored with a perfect header (2-0, 75′). The Monegasques barely had time to celebrate this goal, however, as Wissam Ben Yedder had gotten forward on the right. His cross to the far post found Kevin Volland, unmarked, who scored his fifth goal of the season from close range (3-0, 76′), and his third on an assist from his captain.

AS Monaco were rolling and is even looked to increase the gap a little more on a diving header from Pietro Pellegri (85′), but Baptiste Reynet made a magnificent save. Eliot Matazo’s strike from the edge of the area was unfortunately blocked by a desperate Nîmes defense. Niko Kovac’s men mastered the end to a complete and one-sided match. It was a fourth win in a row for the Monegasques, who temporarily moved into third place, two points behind the Parisian leaders.