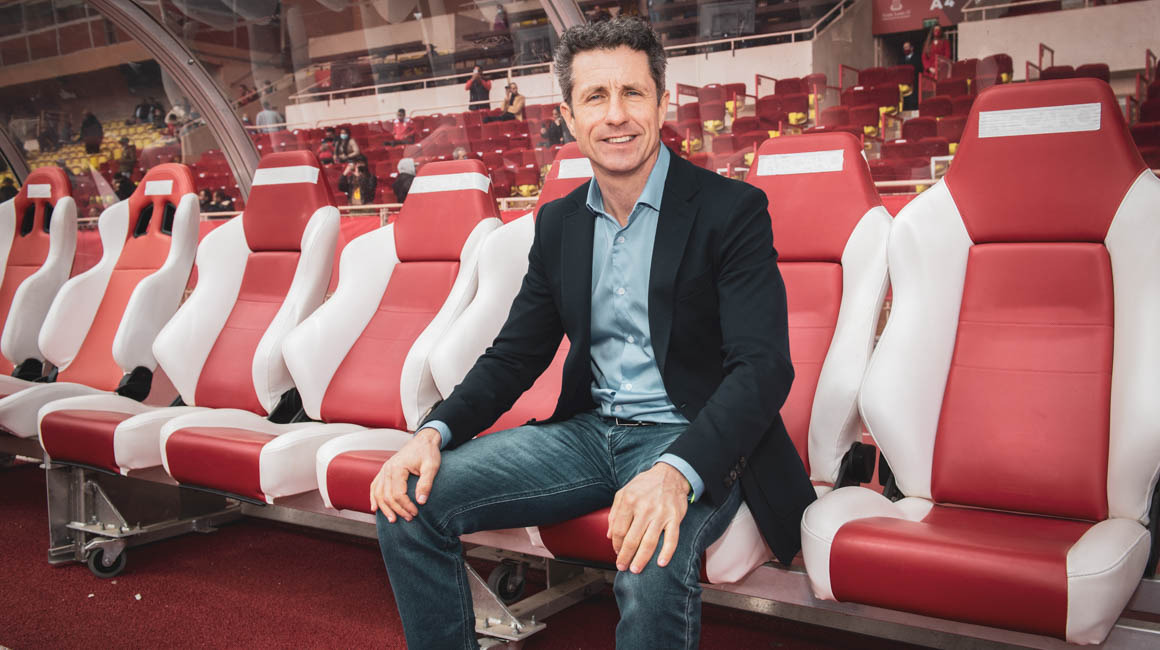 Present on Sunday at the Stade Louis-II to kick off the match against PSG (3-0), the Scottish legend took a few minutes to look back on his brilliant spell on the Rock between 1996 and 1998.

24 years later, he still brings a smile to the Monegasque supporters. Returning to the Stade Louis-II this Sunday to kick off the match between AS Monaco and PSG (3-0), alongside Portuguese legend Rui Barros, John Collins recalled the memories of his time at the Club between 1996 and 1998, with emotion and plenty of nostalgia for an era in which he won a French  title and played in two European semifinals.

Jean Tigana offered me the opportunity to come here and installed me as a starter. He was a coach who wanted us to put on a show, to score goals. For me, it was ideal. He didn't give me a lot of instructions, just: "Ask for the ball and play with it, and when you haven't got it, try to get it back and win your duels"
John CollinsFormer AS Monaco midfielder

Good morning, John. How emotional was this return to the Stade Louis-II?

It’s always the same feeling, it’s a great pleasure because I only have good memories here. I spent two extraordinary seasons here on the pitch, I met very good friends, I won a French title, played in two European semifinals, played with great players who were real gentlemen. With the staff, we really formed a small family, so it was a magical moment in my life. 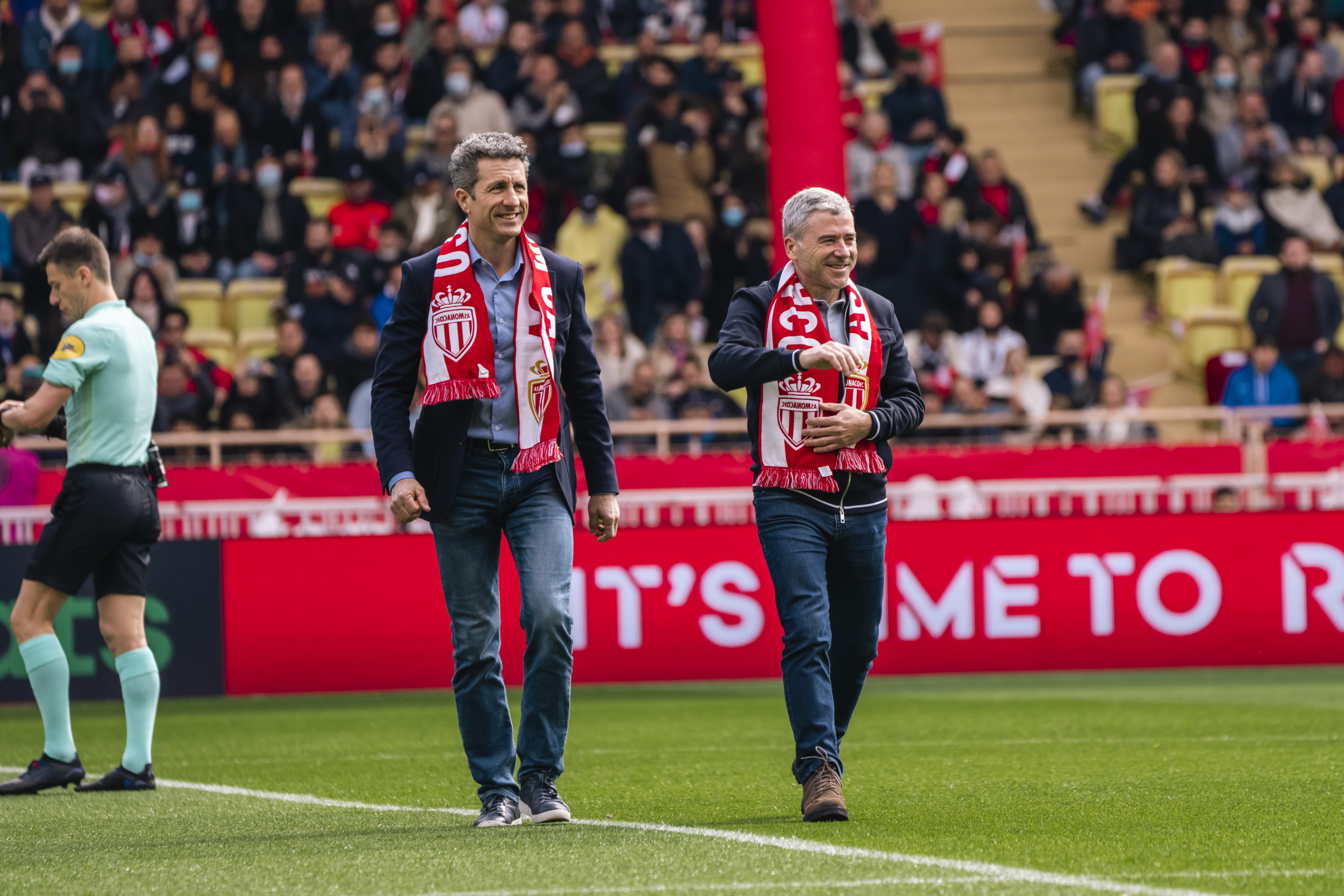 Tell us a bit about Jean Tigana, the coach who recruited you…

He offered me the opportunity to come here and installed me as a starter. He was a coach who wanted us to put on a show, to score goals. For me, it was ideal. He didn’t give me a lot of instructions, just: “Ask for the ball and play with it, and when you haven’t got it, try to get it back and win your duels”. There was nothing complicated, but he had an eye for signing good players and building a great squad.

What was it like playing in this very, very high quality squad?

It was special. When you have good players around you, it’s easy to play well. I played in midfield and in front of me I had Ali Benarbia, who was a real magician, and in attack there were the likes of Thierry Henry, Sonny Anderson or David Trezeguet who were fast and technically impressive. At the back, there was Franck Dumas and Emmanuel Petit who made magnificent passes, Patrick Blondeau, a solid right-back, then  young Willy Sagnol, a technical player with the right attitude. We also had Enzo Scifo! It was really a very, very high level squad, but even more importantly, a great group as humans. Everyone made me feel very welcome; on and off the pitch, it was truly a magical time.

I had played all my career in Scotland and when I arrived here I immediately felt the ambition of the team and the Club, which was to win a title. It was the 700th anniversary of the reign of the Grimaldi family, so it was a special year in Monaco. I remember very well the day we won the title here against Nantes, in front of the whole royal family, then the celebrations during the days that followed. When you’re little and you play in the street, those are the moments you dream of. And the older you get, the more you measure how lucky you were to have experienced this event.

How was the atmosphere like, in this locker room filled with great players?

We were a squad with players with character and confidence, so everyone could talk to each other. There were a lot of leaders. In training, we gave 100%, everyone laughed but wanted to win every day. The sessions were very serious but after that, it was time for a joke or two (laughs)!

These two seasons were a a dream. But I was not surprised because, after two weeks, when I saw the players around me, I said to myself: "Wow, what quality!". And that was not just ten players, but twenty. There was quality in every position and very strong competition.
John CollinsFormer AS Monaco midfielder

In Monaco, you were a part of two great European runs, with in particular victories against English clubs…

In the quarterfinals of the 1996-97 UEFA Cup, we eliminated a great Newcastle team (1-0, 3-0) coached by Kenny Dalglish, who had David Ginola in their ranks. I come from the South of Scotland, close to the English border, so this match was special for me. In the first leg in Newcastle, a busload of Celtic supporters and my family came to support Monaco and we won 1-0, and then 3-0 in the return leg with a magnificent performance from Ali Benarbia. The following season, we met Manchester United in the quarterfinals of the Champions League. It was a team with Sir Alex Ferguson and David Beckham. All of Europe thought they were going to eliminate us, but I always had faith. We drew at home (0-0), then we were confident of scoring at Old Trafford. And David Trezeguet scored a superb goal, putting it under the bar, which gave a massive qualification for the team (1-1).

What makes AS Monaco a special club?

His Serene Highness Prince Albert II was often in the locker room before or after games. He was close to the squad. In the world of football, it is rare to have this level of closeness; I found that very pleasant. He was always nice to me, he spoke English to me when I hadn’t yet learned French.

How do you explain that you are one of the rare British players to have succeeded in France?

I came here without knowing the French league, because at the time it was not being broadcast in England, nor the players who played there. But immediately I saw a lot of very good, very young players. Technically, Ligue 1 was far superior to the Scottish league and it was therefore a challenge for me. I am very happy to have won a title in my first year at the Club and to have played in two European semifinals. These two seasons were a a dream. But I was not surprised because, after two weeks, when I saw the players around me, I said to myself: “Wow, what quality!”. And that was not just ten players, but twenty. There was quality in every position and very strong competition.

Finally, tell us about your goal against Brazil in the opening match of the 1998 World Cup…

The 1998 World Cup was really special for me, because I was representing my country and we were playing the opening match against Brazil. Since I was little, I’d watched the World Cup in front of my TV, like everyone else, and the Seleçao is the team that people love. I remember the feeling in the Stade de France tunnel when we came on the pitch. Paris was full of Scots, although unfortunately there weren’t too many in the stadium; tickets were hard to come by. But scoring the equalizer in front of my family and our supporters was a pleasure for me, although unfortunately Brazil won (2-1). It remains a special event in my life.