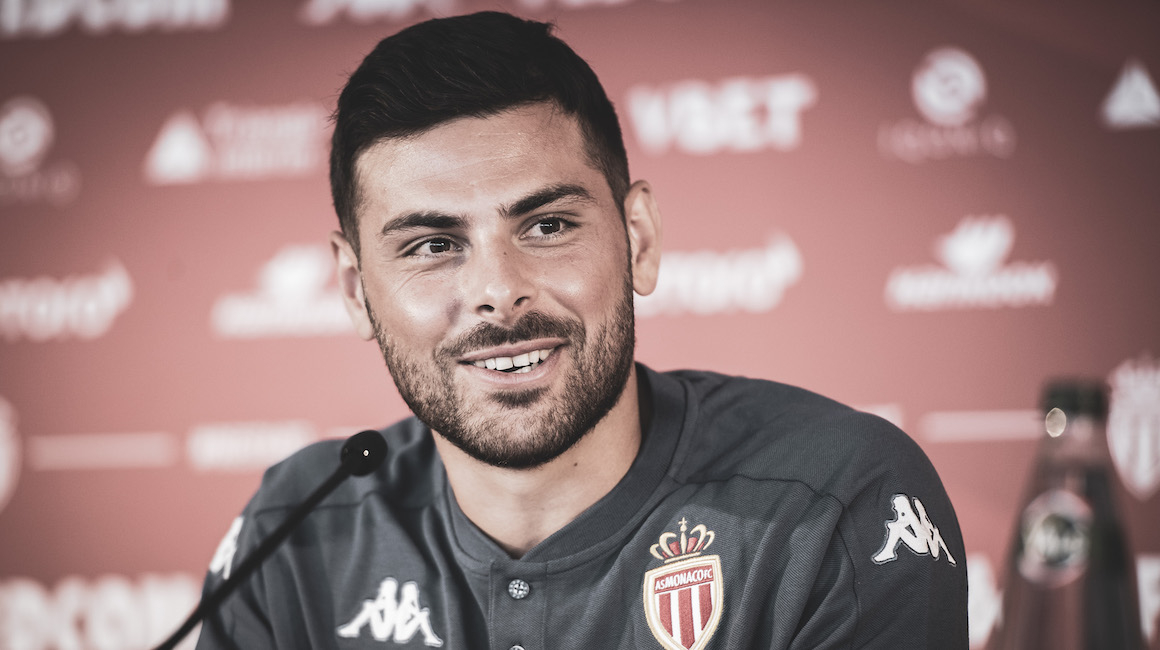 Une journée avec... Kevin Volland
Ten days after arriving at AS Monaco, on a contract through June 2024, the German international (10 caps) was presented to the press in the company of Oleg Petrov and Paul Mitchell, two days from the match against Nantes at the Stade Louis-II.

He has played almost 250 Bundesliga matches in his career. A formidable scorer (77 goals) and also a very altruistic player (62 assists), Kevin Volland, 28 years old, joined AS Monaco earlier this month. A target for Niko Kovac, the versatile German striker, who can play any position in attack, spoke to the press for the first time this Friday afternoon. Two days from the match against FC Nantes at the Stade Louis-II (17h), the former Bayer Leverkusen player shared his first impressions with Oleg Petrov and Paul Mitchell. Extracts.

Kevin, how are you approaching your first experience abroad?

Hello everyone, I am very happy to be here and to join AS Monaco. It is indeed a new experience for me. It’s a different league, there is a lot of speed in this league, a lot of physicality, box-to-box play. The first few days went very well, I was welcomed very well by my new teammates. I hope to adapt quickly to Ligue 1, as there are differences again between Germany and France, and I will definitely need some time.

Tell us about your first match with AS Monaco, the friendly against Nice …

This first match was a good experience. It was difficult for me because I had only arrived in Monaco two days earlier. I still have a lot to learn, a lot of things to learn about the game in France. I haven’t had an extra pre-season this year, as we finished the league season in Germany only a few weeks ago. So I might need a little time, but if the coach calls on me, I will be ready on Sunday against Nantes.

One of my earliest memories of AS Monaco was having the Fernando Morientes jersey when the team went to the Champions League final. Then the year I played AS Monaco (2016, editor's note), it was a very strong team with great players, who finished as champions of France and who played in the semifinal of the Champions League.
Kevin Volland

You know Jürgen Klinsmann played here in Monaco. Do you think you are doing as well as him?

(Smile) Jürgen Klinsmann is a legend in Germany, one of the best strikers in the history of the country. I know he played here and had a lot of success with AS Monaco, and obviously I hope to score as many goals as him. In any case, I will try.

Why did you choose AS Monaco, do you have any memories of this club?

One of my earliest memories of AS Monaco was having the Fernando Morientes jersey when the team went to the Champions League final. Then the year I played AS Monaco (2016, editor’s note), it was a very strong team with great players, who finished as champions of France and who played in the semifinal of the Champions League. It’s a great club with a great history and that’s why I decided to join AS Monaco.

Which is your stronger foot?

I think my left foot is the best, but I can score with both feet.

You have already played with the German national team. Is it a goal for you to be recalled?

I played with the national team four years ago. I played 10 games with the Nationalmannschaft and it was a great experience. But the level is very high and the squad was already in place at the time, so it was difficult for me. And since then, they wanted to rejuvenate the team so it’s become difficult for me. Despite everything, I am still in good shape and obviously hope to return if my performances are there.

“The last time we were here was before the start of the season. Since then we have played two matches, which have been very competitive but very positive. The team has shown a combative spirit, which is very important for Paul, Niko and myself. We are working a lot at the club to get back to the top level. Today I am very happy to introduce you to Caio Henrique and Kevin Volland. I am sure they will bring a lot to the team. I welcome them.”

“The strength of Kevin’s profile is that he is versatile, he can play anywhere, at any position in attack. In my teams, I like to introduce competition. With Kevin you have a lot of options. I’m not the coach, but my job is to build a team with complementary profiles, to balance the squad. I obviously think he can form a great partnership with Wissam Ben Yedder, they have the qualities to play together.”