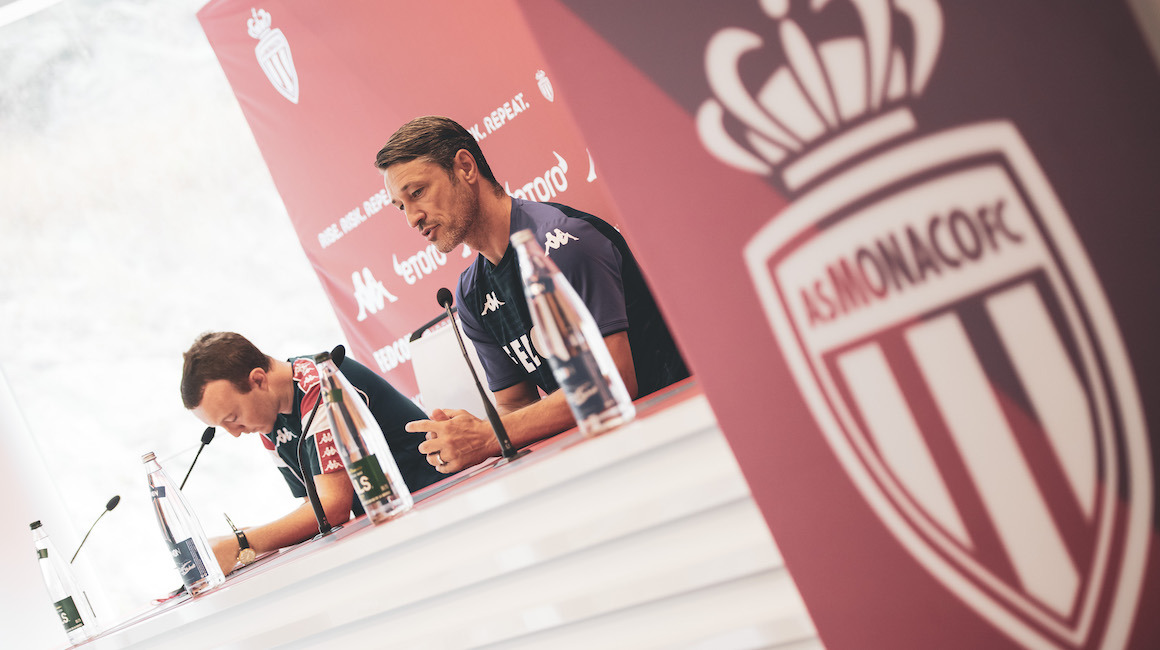 What are ten things to know about Myron Boadu?
Two days after the win away to Sparta Prague (2-0) and on the eve of the Ligue 1 home opener at home to Nantes, Niko Kovac spoke at a pre-match press conference, giving the coach an opportunity to address the club's ambitions for this season.

Ligue 1 is (almost) now here. This Thursday, Niko Kovac spoke with the press in the auditorium of the new Performance Center, to discuss the return of Ligue 1, this Friday against Nantes at the Stade Louis-II (9 p.m.). The Monegasque manager  spoke about the arrivals of Jean Lucas and Myron Boadu, but also mentioned his desire to see his team be even more efficient than last season.

August is a busy month, there are a lot of matches, but that's what we wanted, to play a lot and not just to be on the couch watching the games.
Niko KovacManager, AS Monaco

Hello Niko. Are you impatient to start the Ligue 1 season?

Yes we are, we’ve had a long preseason with just over five weeks of work, so we’re happy to play this first match. We want to be in competition for the top spot, to battle with other teams to see who is the best. We have a lot of desire and motivation in starting the season. We want to show the best of AS Monaco.

With the Champions League already having started, you have had a busy start to the campaign. Do you have any doubts about the team’s physical condition?

As you know, we want to be playing every three days. It’s a new rhythm for what is a  young team. My players are improving in terms of their physical condition, and we are at a good level, we can play every three days. My players are talented, and there is competition in the squad — that’s what I want and what we need. If we manage to work hard, we can among the best teams. August is a busy month, there are a lot of matches, but that’s what we wanted, to play a lot and not just to be on the couch watching the games.

With their recruitment, are PSG still the favorite to win Ligue 1?

Yes of course. We know players PSG have. They already had a lot of stars and have recruited more. Obviously, they have all the ingredients in place to win the title. But you know, football is played on the pitch, the truth is told on the pitch. Let’s see what happens — I’m ambitious, and so too are my players, so we’ll see. PSG are still the team to chase in Ligue 1. Everyone wants to beat them. I know it will be difficult, and it would be silly to say that we want to finish top.. We want to maintain our level of performance from last season, but it won’t be easy. OL, OM, Lille, Nice and Rennes are all trying to be better than last year, which means that we must be aware of that and improve. If at the end of the season we’ve done better than last year, maybe we will have a title. We were not  far away last year in the Coupe de France by chance, but PSG are really the strong favorites.

How do you view  the racist incidents during the match against Sparta Prague?

I gave my point of view after the match and our club did the necessary thing by communicating with UEFA. We gave the information in the referee’s report. We will follow UEFA’s decision, the outcome of which we are following closely.

We are one team!
Tous derrière toi Aurélien 🙏

Are you looking forward to seeing the supporters back at Stade Louis-II?

We have been waiting for this moment for a long time. Football without supporters is a totally different sport. Players like to feel the support of their supporters. I hope their return will last longer than last season and especially that this virus will be kept at a very low level to allow our supporters to be with us throughout the season. We are in any case very happy that they are back.

We already have Kevin and Wissam and we were looking for someone along those lines: a strong and fast nine, who plays well in transition. He will increase our overall quality in this area.
Niko KovacManager, AS Monaco

What will the new recruits, Jean Lucas and Myron Boadu bring to the team?

I know these players well, we’ve been following them and that’s why we recruited them. They are talented young players. We are increasing the quality of the squad, that’s what we want, to create a solid base to raise the level of the club and the team. Both are able to start the season. Jean Lucas had a preseason with Lyon and played well with Brest last year. Myron is a real prospect, with a lot of quality and pace. They can help us as soon as tomorrow, but unfortunately not against Prague because they are not registered. But they will help us.

Can you describe the style of Myron Boadu to us?

We already have Kevin and Wissam and we were looking for someone along those lines: a strong and fast nine, who plays well in transition. He will increase our overall quality in this area. He is very fast, has a direct style of play, and good technical quality. We are very happy to have such a young goalscorer at this club.

What did you think of Alexander Nübel’s first match and will he remain the number one goalkeeper?

I was happy with his performance. He did a good job, especially in building play with his feet. In the locker room he was a presence, and he encouraged his teammates, this surprised me but it’s a good thing, I find that important. As I told you in the preseason, the goalkeeper who plays in our first match has a good chance of continuing to do so — he deserves this. He is a good goalkeeper, who can help the team, but he also knows that there is a lot of competition with the other goalkeepers, but I have confidence in his qualities.