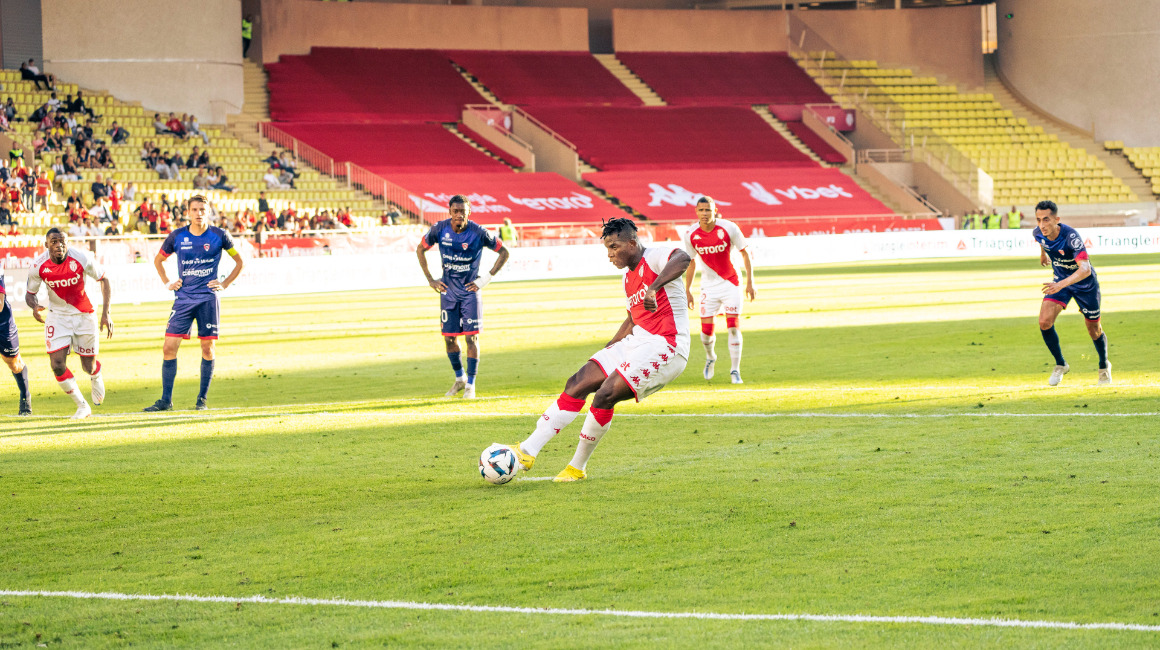 Reduced to ten men after only 15 minutes, the Rouge & Blanc had to share the points in a 1-1 draw against Clermont.

Three days after the match against Trabzonspor, AS Monaco welcomed Clermont with one objective: a sixth consecutive Ligue 1 win. Quickly reduced to ten men, the Rouge & Blanc had to make do with a 1-1 draw. Philippe Clement made two changes from Thursday’s Europa League game: Guillermo Maripán and Takumi Minamino came in for Malang Sarr and Krépin Diatta.

The match began at a slow pace between the two teams. But just after the first quarter of an hour, the balance shifted after Mohamed Camara’s sending off in the 17th minute for an involuntary stud on Saïf-Eddine Khaoui.

The Monégasques – despite the numerical disadvantage – gained momentum, and in the 27th minute could’ve taken the lead had Breel Embolo converted substitute Diatta’s inviting cross. Two minutes later, our Swiss striker earned a penalty after a foul by Yohann Magnin, scoring the rebound to notch his fifth goal of the season.

Despite everything, the Auvergnats continued to attack and created a golden chance in the 34th minute. Played in from deep, Grejohn Kyei stumbled on Alexander Nübel, with the ball falling to Muhammed Cham whose attempt came back off the post. Caio Henrique then blocked Khaoui’s follow-up on the goal-line before Elbasan Rashani saw his shot saved by Nübel.

Shortly after, Khaoui saw his free kick pass just wide of the goal. But at the break, it was our Rouge & Blanc who were in front.

After the equaliser, a Rouge & Blanc reaction

During the second half, Clermont were in the ascendency. Guillermo Maripán had to be vigilant in the 47th minute with Grejohn Kyei waiting to pounce. Six minutes later, however, Pascal Gastien’s men equalised thanks to Komnen Andric, reacting quickest after Khaoui was initially denied by Nübel. The Monégasques tried to react and with 15 minutes remaining, Eliot Matazo put Mory Diaw to work with a testing effort in search of regaining the advantage.

Five minutes from time, AS Monaco tried to snatch victory, but substitute Ismaïl Jakobs’ attempt was turned away for a corner by Diaw. The game’s last chance fell to the visitors, but Mateusz Wieteska placed his header just wide and the points were shared in the 1-1 draw.

The Rouge & Blanc’s unbeaten streak in Ligue 1 continues. Next up is a trip to Lille next Sunday, 23 October (20:45 CEST). Daghe Munegu!

Sent off: Mohamed Camara (17′) for AS Monaco