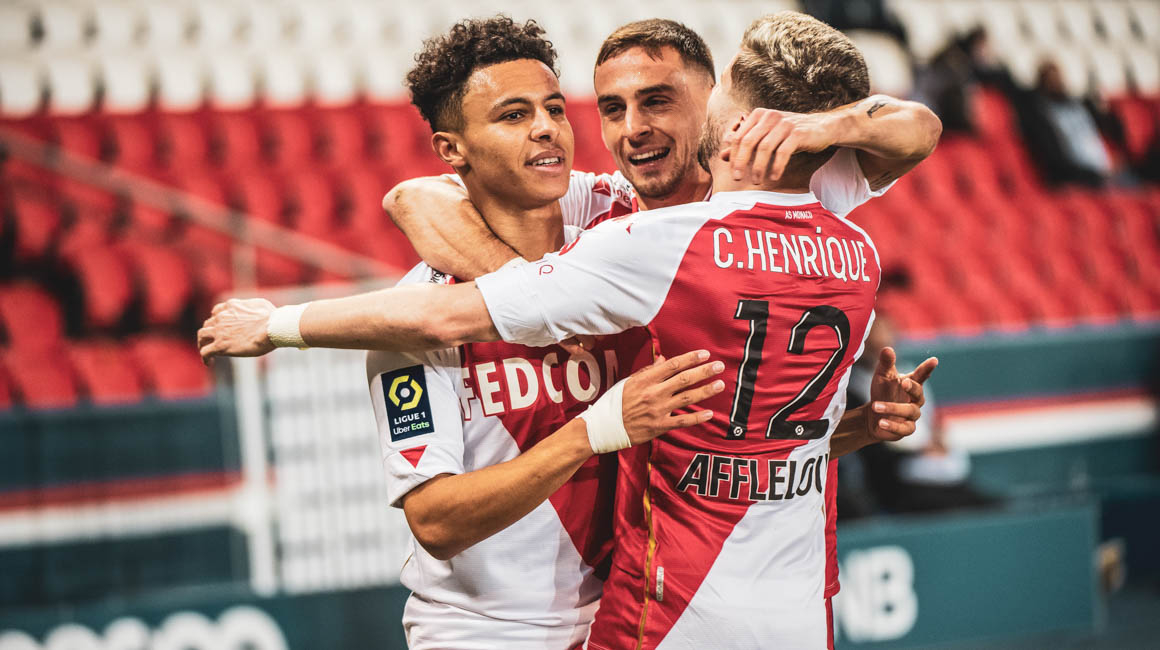 Aurélien Tchouameni : "Nous devrons être concentrés à 100%"
Niko Kovac's side earned a big win against Paris Saint-Germain at the Parc des Princes (2-0), after a very high-level performance. Sofiane Diop and Guillermo Maripán scored to guide the Rouge et Blanc to their second victory of the season against the defending champions.

To face PSG, Niko Kovac decided to innovate at the Parc des Princes. The Croatian manager decided to move to a three-man defence in order to muzzle the attack led by Mauro Icardi and Kylian Mbappé. The big match of the 26th round was all the more anticipated, after the respective wins of Lyon and Lille earlier in the weekend. It was a massive match which confirmed all of the anticipation surrounding it with a magnificent win on the part of AS Monaco. 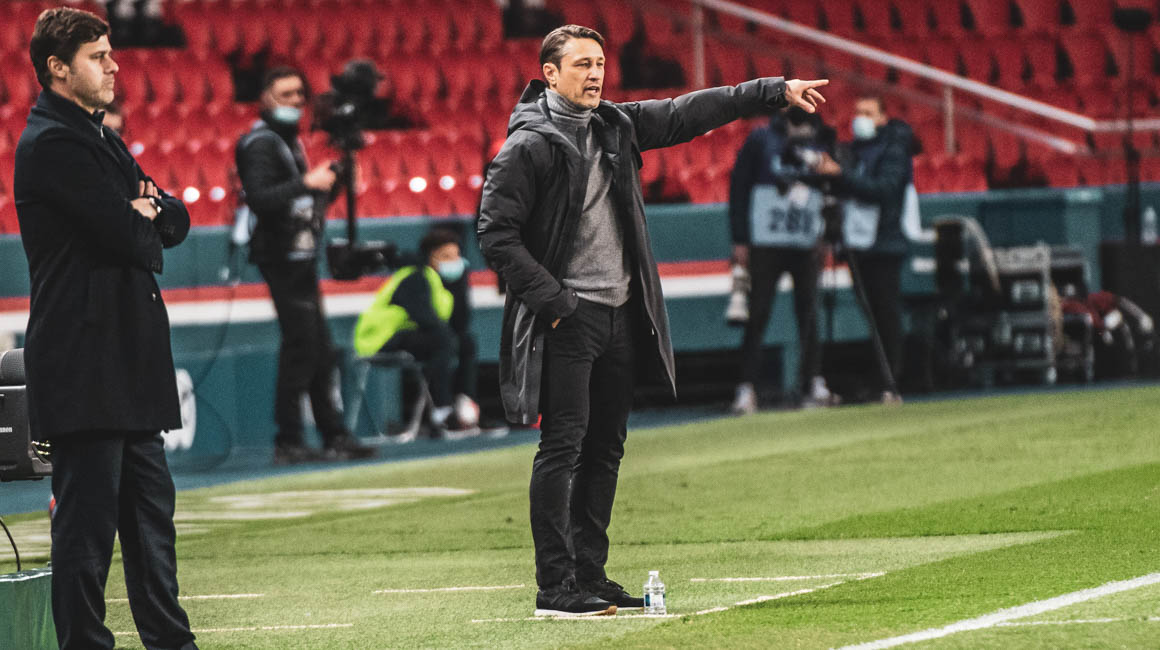 AS Monaco’s discipline is rewarded

Unfancied before the game, the Red and Whites made a thunderous start to the match thanks to the opening goal by Sofiane Diop in the first minutes of the match. Wissam Ben Yedder started the move in midfield; he played in Kevin Volland on the left flank, and the German played a cross to the back post, picking out Ruben Aguilar who smartly cut the ball back to the penalty spot for Sofiane Diop.

The Monegasque number 37 finished with a superb header and scored his sixth of the season (0-1, 6th). The Principality club had started with a surprise, making a good start to the game by quickly taking the lead with what was the most quickly conceded goal by Paris Saint-Germain this season. 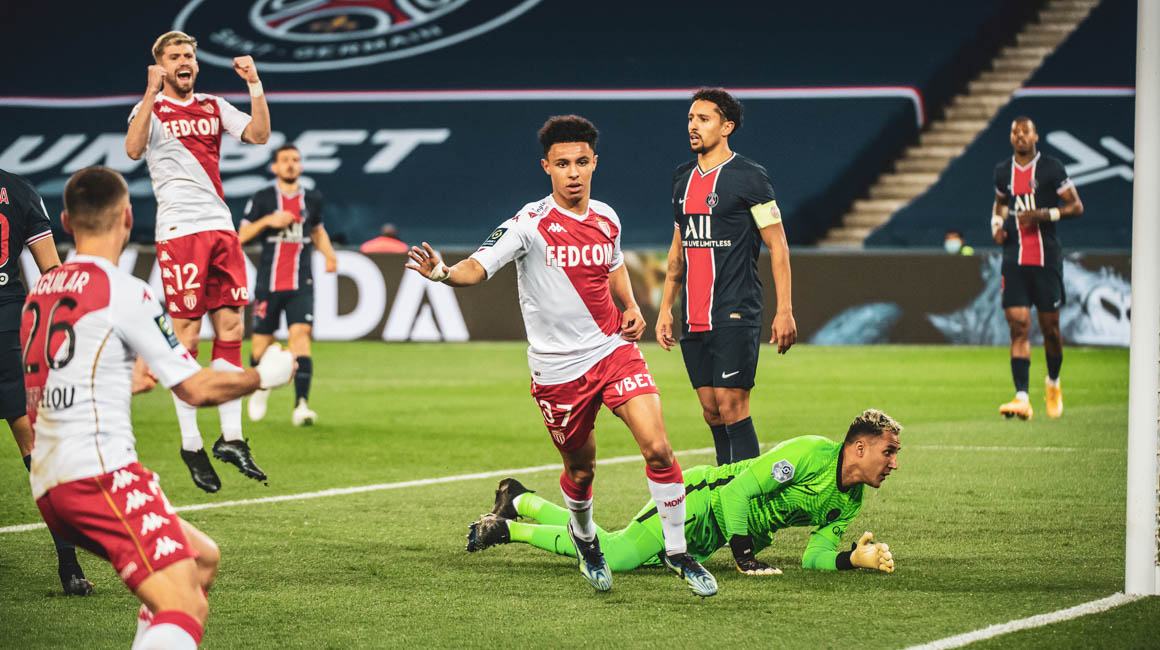 The Rouge et Blanc defence held firm for the first 45 minutes, as Laywin Kurzawa’s free kick from 20 meters did not find the target on a quarter of an hour of play. It was even a Monegasque defender who made an impact in PSG’s penalty area. Axel Disasi, who made his return to the starting lineup, had a free header from a corner which did not trouble Keylor Navas, in the end.

Without having found a solution, the Ile-de-France side tried their hand from outside the area, with Idrissa Gueye’s strike coming close to finding the goal of Benjamin Lecomte (35th). The Monegasques kept the score until half-time and turned in a serious and composed first half, without relenting in their level of play. 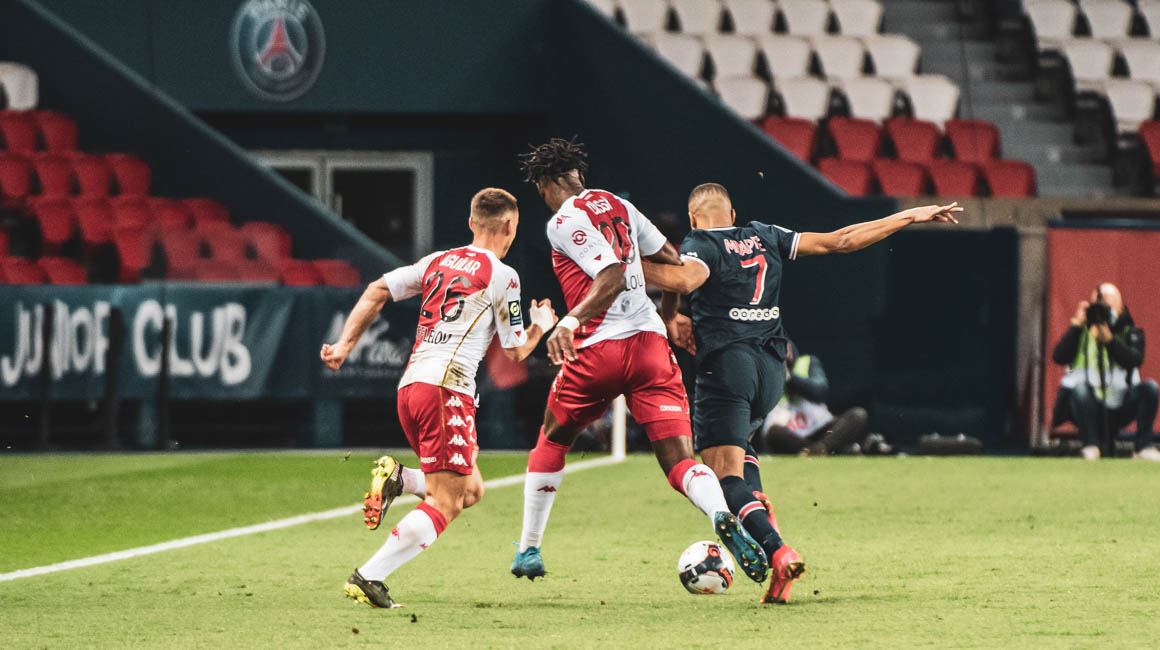 The breakthrough comes at the start of the second half

On returning from the locker room, the Rouge et Blanc kept things under control by playing in almost the same way as they had as during the first half, with a goal scored as soon as play resumed. The Monegasques had a corner and pushed hard to challenge the opposing defense. The Parisians tried to clear the ball cleanly but Guillermo Maripán was there to tuck home the loose ball.

The Chilean hit a curving shot worthy of an attacker and found the bottom corner of Keylor Navas’ goal (0-2, 53′). Niko Kovac’s team had widened the gap, and were keeping the Parisians under wraps, annihilating Mauricio Pochettino’s plans. 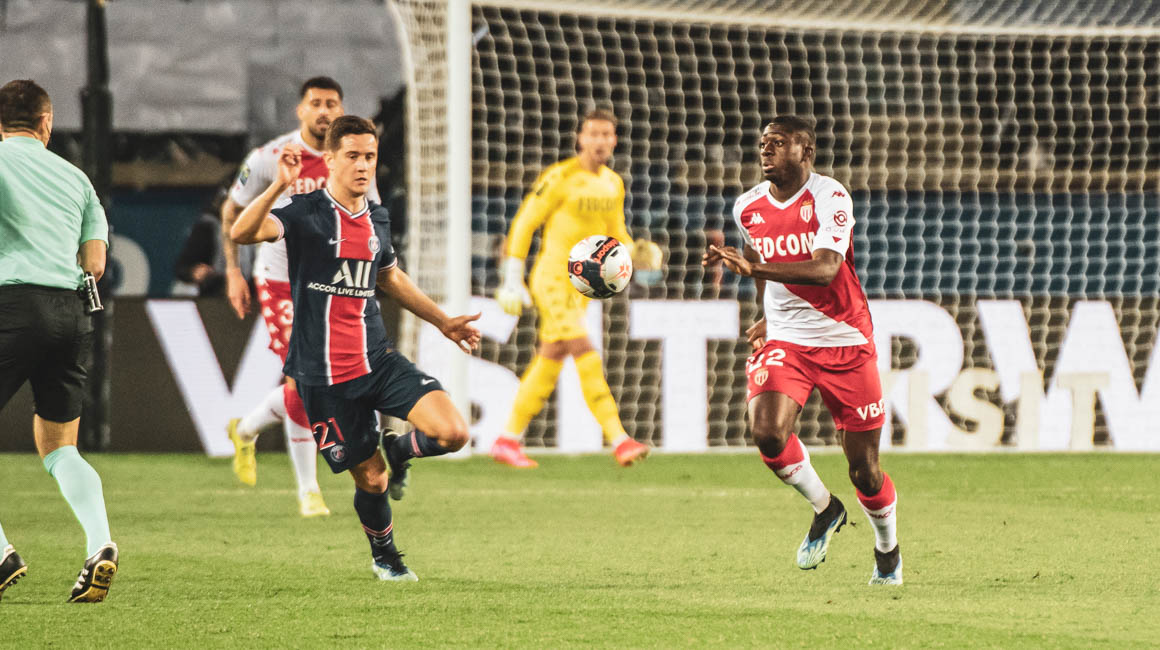 The stat says it all, PSG had not been down two goals since February 15, 2020. AS Monaco, serious both offensively and defensively, did well to limit the opponents’  attacks. Kevin Volland was even very close to sealing the game but his header flashed just wide after a brilliant pass from the left foot of Caio Henrique. (62′).

Wounded, the locals responded through Kylian Mbappé but Guillermo Maripán, again, made a decisive block. His sliding tackle took the ball off the native of Bondy at the last minute. Frustrated, the Paris striker only  had six touches in Benjamin Lecomte’s box. Exemplary throughout, the Rouge et Blanc defenders would not give up and left nothing but crumbs for the Parisians. Moïse Kean could not hit the target come the end of the game, on a ball where the Italian could have played in Kylian Mbappé, who seemed better placed (77th). 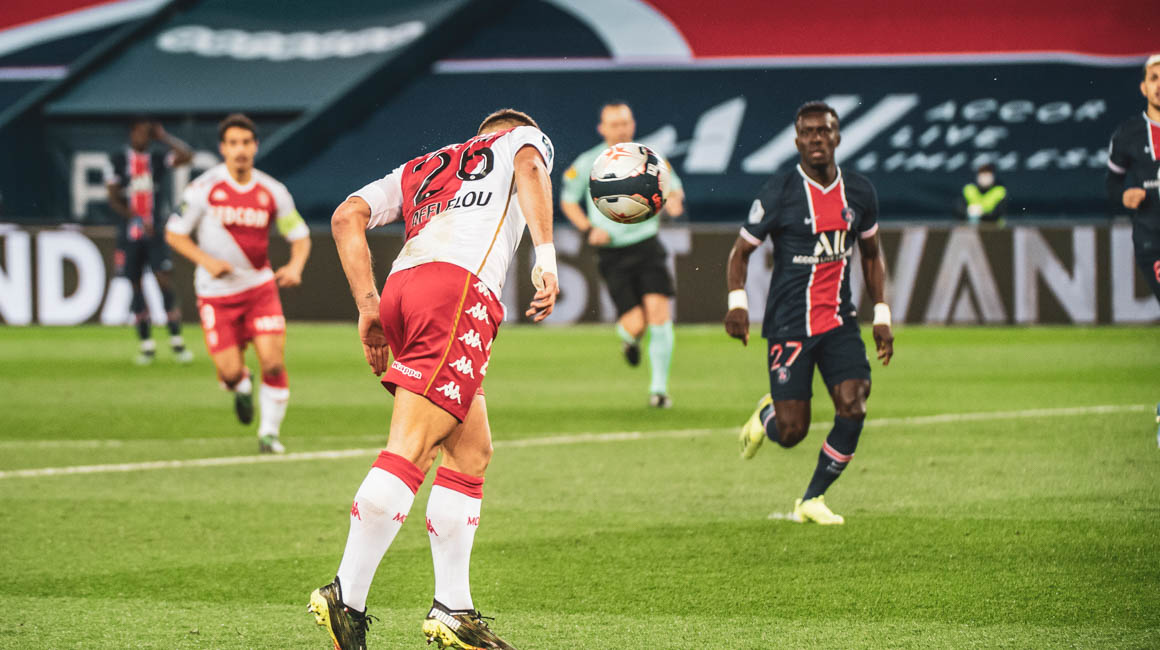 The multiple Parisian attacks came to nothing, all snuffed out by Monaco’s central defence, which was flawless at the Parc des Princes. Kept silent, the Parisians lost for the sixth time this season, with a serious and focused AS Monaco team controlling the match from the first to the last minute. The men of Niko Kovac, author of a remarkable tactical display, even became the first to beat PSG twice in the same season since Nancy in 2011/2012.

This evening could not have been better for Wissam Ben Yedder and his teammates. This precious victory allows the Monegasques to remain undefeated in 2021 with nine victories since the beginning of the calendar year, and above all made it possible to move 12 points ahead of 5th place. It was a royal display! 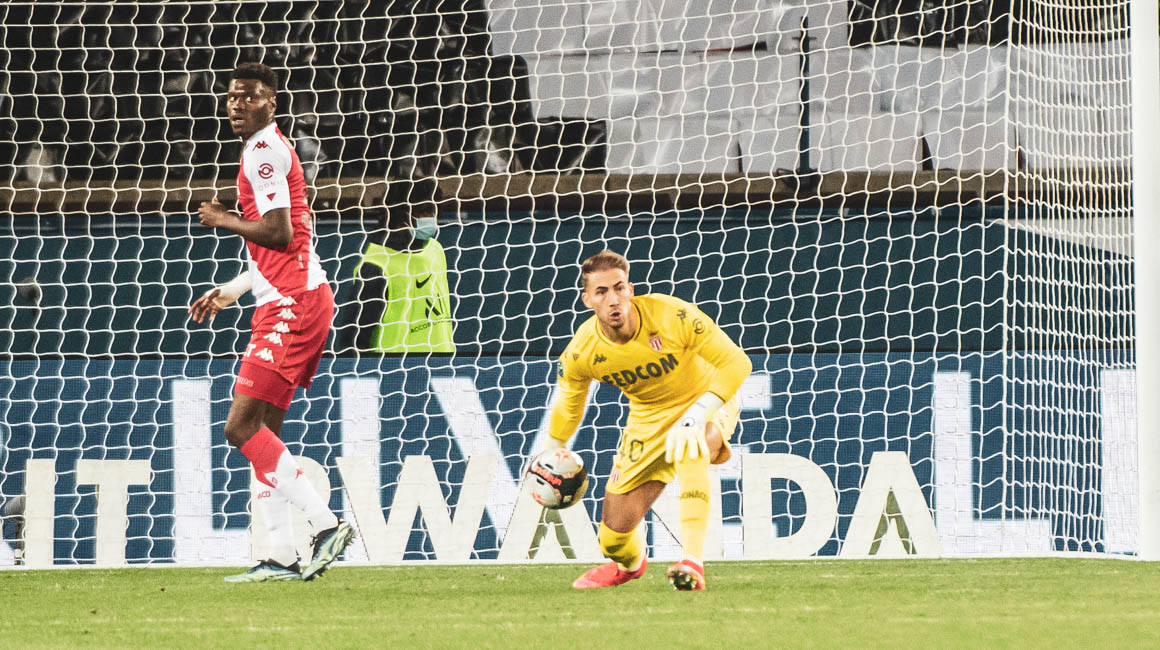