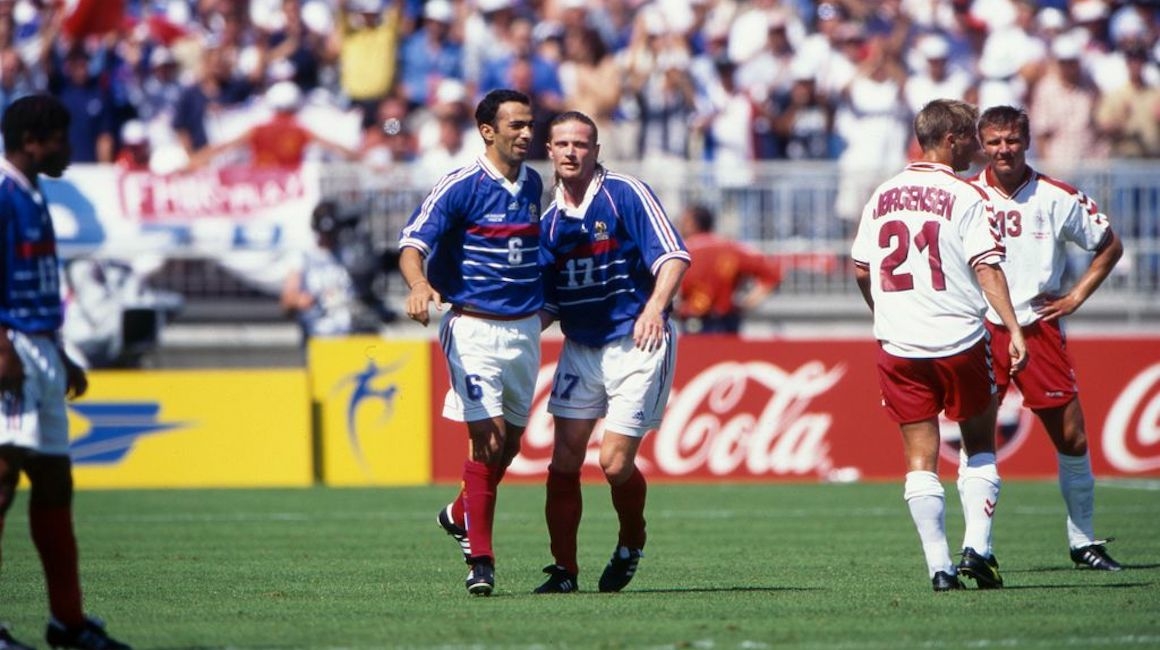 Éric Di Meco : "J’ai gardé des super potes de l’AS Monaco"
Before the big match of Matchday 26 in Ligue 1 between PSG and AS Monaco (9 p.m.), the former Rouge et Blanc playmaker took the time to speak about his career in the Principality.

He says it himself, he has  experienced everything in Monaco — it all started there. Before becoming world champion with Les Bleus in 1998 and winning Euro 2000 with this same “golden generation,” Youri Djorkaeff revealed himself to everyone while playing at the foot of the Rock wearing La Diagonale on his shoulders

Grateful to the club which allowed him to make a name for himself in France and in Europe, but also to forge very strong links with his future teammates in the French team, the “Snake” has not forgotten what he experienced playing in the Principality. So it’s with a bit of nostalgia for his years spent in Rouge et Blanc, that the former French playmaker, now head of the FIFA Foundation, has agreed to take a look back on his career. 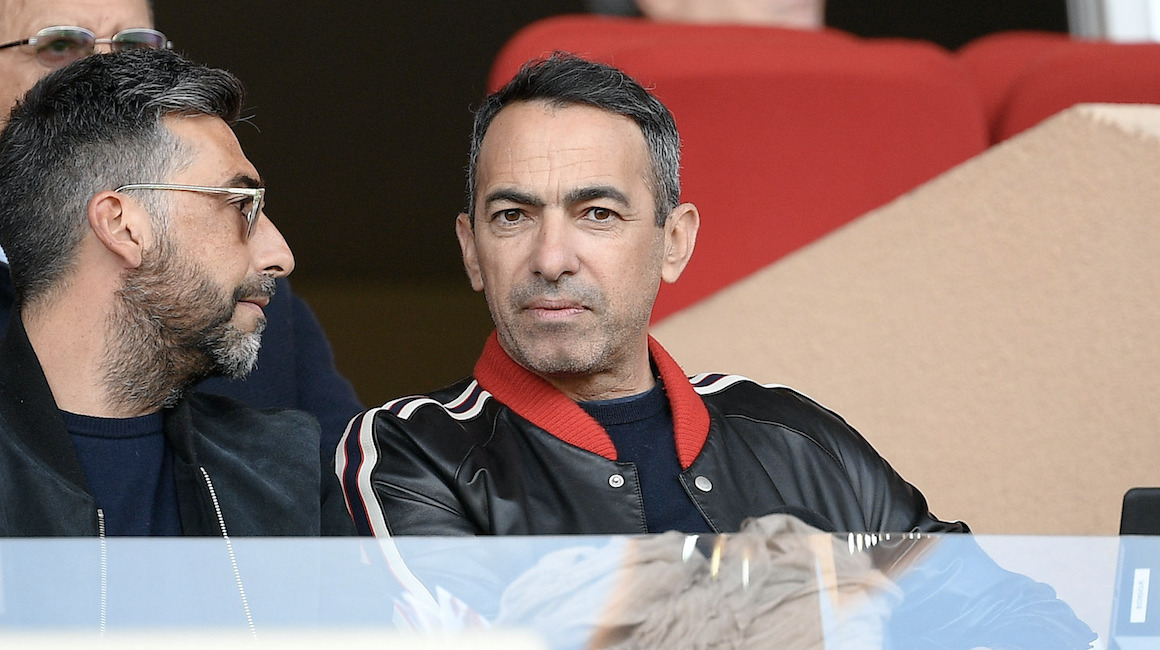 Hello Yuri. To begin with, remind us of the context in which you arrived at AS Monaco in 1990.

It was Arsène Wenger who asked me to join  — at the time, I had been voted best player in Ligue 2 with Strasbourg. I finished second top scorer in the division with 20 goals I think (21 goals and 9 assists -ed.) Unfortunately we missed being promoted in the playoffs, despite having a very great season. This was my first season with Strasbourg, and a lot of clubs were interested in me, including AS Monaco. But Strasbourg did not want to let me go at the end of this season.

Arsène continued to follow me and pushed for the move and I finally arrived in October. It was quite a special time for me, because at the same time I was in Joinville doing my military service. So it was weird, I had landed in a totally different world, in an area I didn’t know, with the label of being a promising youngster. I was AS Monaco’s biggest transfer at the time, so I was coming in with a lot of pressure on my shoulders.

What allowed you to adapt quickly in that context?

At the time, I was in the army with Manu Petit, who was just coming through the Monaco training center. So he helped me become acclimated right away, having been in the army together and playing for the same club, it brought us closer together. I was able to bond with him pretty strongly. And then arriving late, you don’t have time to think about things, you have to fit in quickly. Besides, things went pretty well since that season we won the Coupe de France by beating Marseille 1-0 in the final. So I was happy with my debut season, especially as I would meet some great players thereafter at AS Monaco. It was really good.

You inherited the role of Glenn Hoddle in the team — that’s not easy, no?

I always wanted to play with him, unfortunately he left just before I arrived. It was certainly not easy, because before in the clubs where I was, I had been a leader. So I had to prove myself, earn my place. It was a real challenge. But Arsène explained to me why he was counting on me, and from there you had to give it your all. All of my first successes were with AS Monaco. My first caps with France (1993), my first titles, I also finished top scorer in the league in 1994. I had the chance to play in Europe and the Champions League. AS Monaco was more than a springboard for me, I was able to thrive there.

Do you have any memories of the Stade Louis-II?

I loved playing there. Everyone criticizes AS Monaco, saying there are no supporters at the stadium. Players who complain about this should not sign for AS Monaco. In any case, if there is one thing that defines this club, it is the beautiful style of play. We were kind of the guarantors of that. Because the Princely Family was really into football and there was a quality of football in AS Monaco that fueled this idea. And it was very nice to be part of this drive to move forward, to play great football.

I remember the season in the Champions League where we only lost against a great AC Milan in the semifinal in 1994. In fact, they would win the title that year. Before that we had lost in the final of the Cupwinners Cup against Sampdoria. Between these two events, we brought the club to a certain level, but once again we validated the reputation of French football. We also have great players in France, great clubs. Marseille proved it at the same time as us. It was from that point on that we started to really talk about France being a power in Europe. 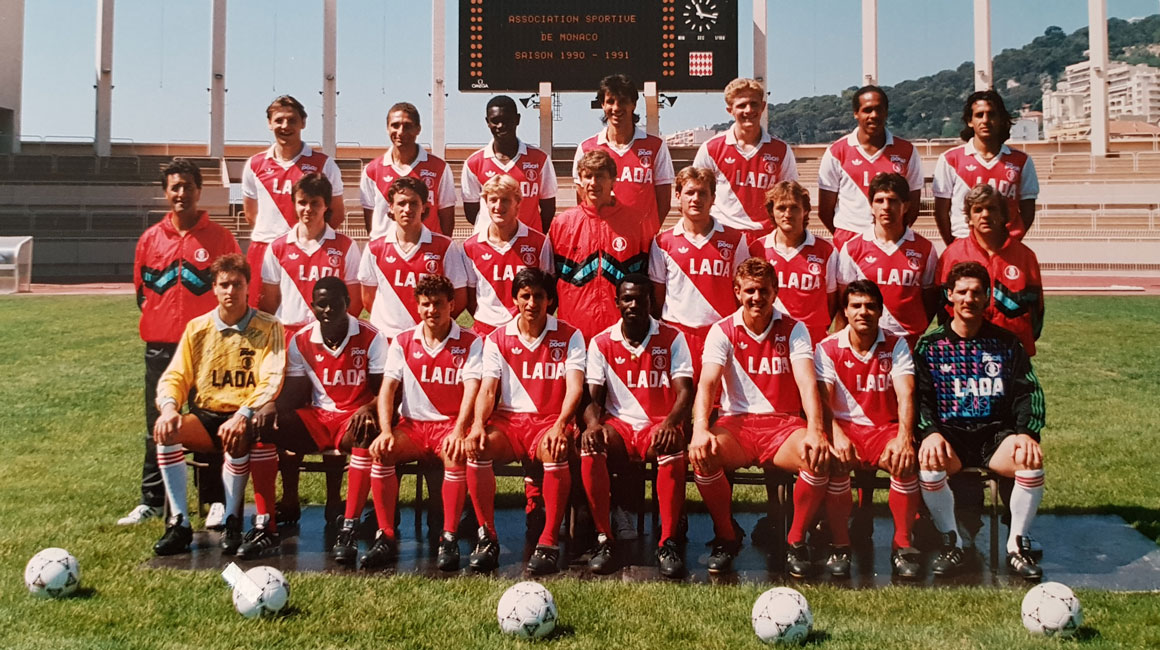 That was the will in Arsene Wenger’s day and also for President Campora, to bring AS Monaco to another level…

Exactly. I believe it was this set of like-minded people working for the club that made us have had such success. As much Arsène as President Campora but also the Princely Family, everyone had the will to bring AS Monaco to the highest level. And I think since those years, even if there have been ups and downs at times, the club has always wanted to represent something that did not stop at the borders of Monaco. 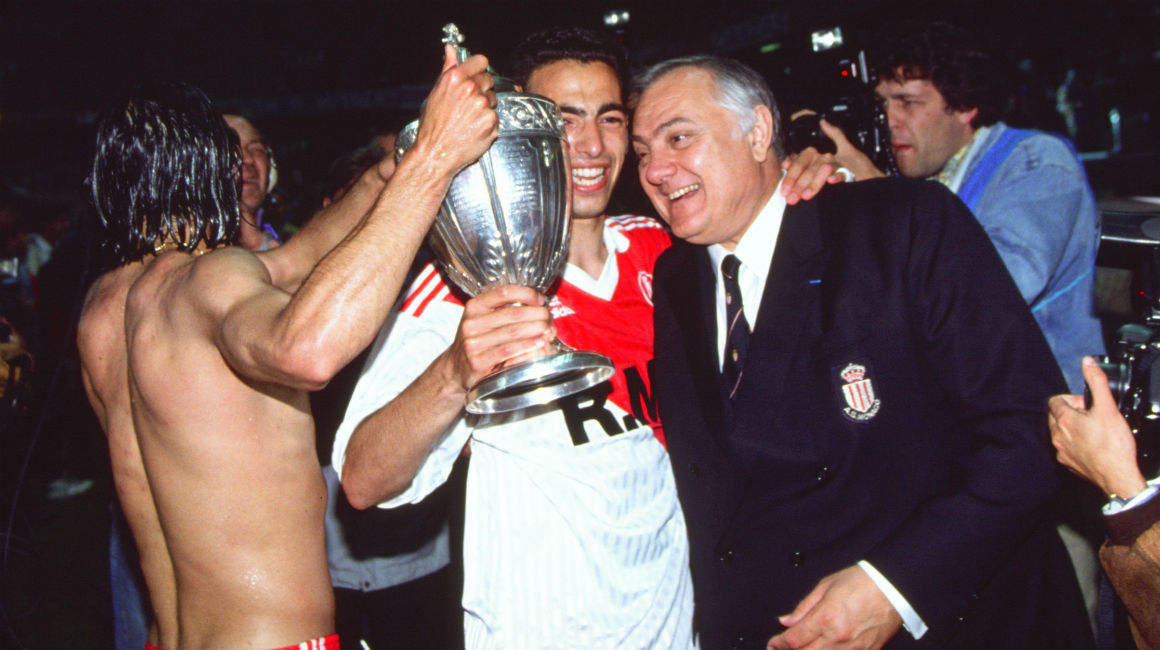 Which players have particularly impressed you throughout those five years?

I think of Manu Petit and Lilian Thuram, who I knew at a very young age, since Lilian had just left the academy when I arrived. It was with them that I had a really strong bond. Even with George Weah, he seemed to be a diamond in the rough. Honestly, it was something with George. Even though he did not train at AS Monaco, he was the symbol of a club that allowed its young players to shine. He was a real character. We were both playing in attack, so it’s true that I had a strong relationship with him. But he became a Ballon d’Or winner and had a great career. We saw him arrive, George, and impress with his physical strength, but also his intelligence for the game — he was developed at AS Monaco.

Would you say that the foundations of 1998 came from the foot of the Rock?

Once again with Manu, Lilian, but also Fabien Barthez, David Trezeguet, Thierry Henry and me, we were a whole team who learned our trade at AS Monaco. There was this connection between us. The La Turbie training center had forged a bond among us. The few thousand supporters who came to the Stade Louis-II we all knew, they were people we saw often. It was a family. And we always enjoyed seeing each other and talking about things. Between us, I have never heard a single player speak badly about AS Monaco. The atmosphere that was there at the club means that we have always been loyal. And AS Monaco has always been loyal to us. 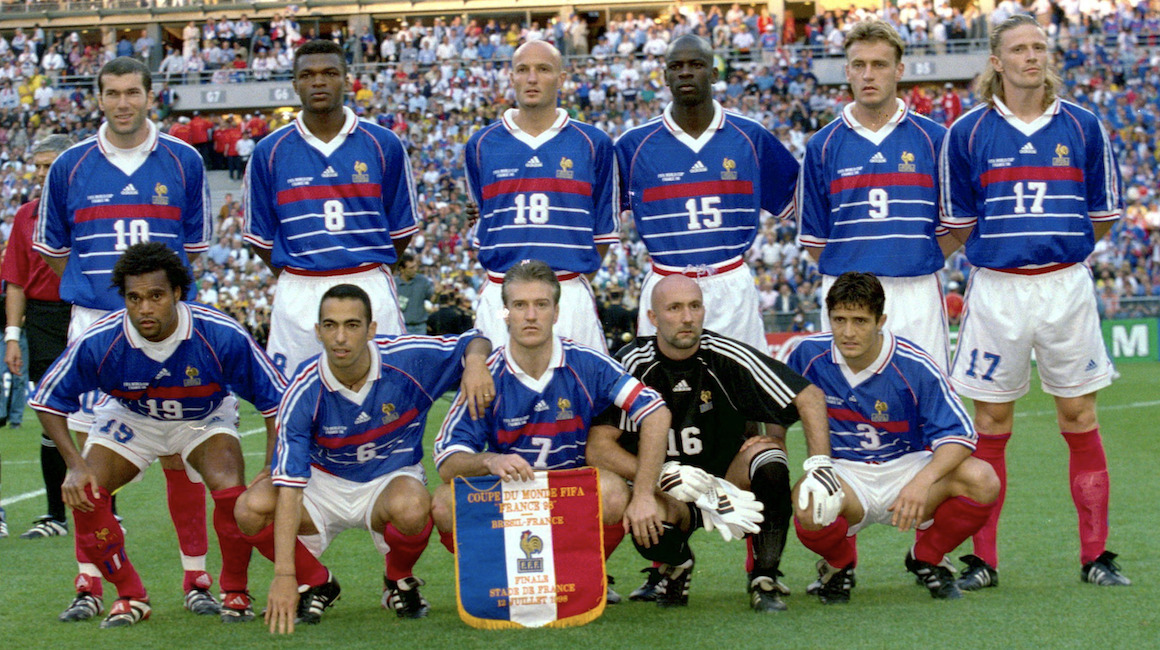 Has Arsène Wenger had a particular role in your career?

Of course. He wasn’t the easiest from a coaching standpoint, but he was very important to me. I’m laughing about it because we were just talking about it together last week in Doha. Our offices are practically next door to each other at FIFA here in Zurich. We often talk about those times, and I recently explained to Kaka and Mascherano how Arsène sometimes made me work (smiles). But I think through his philosophy, his attention to detail, his drive to succeed, his ambition, he was an incredible coach.

He had us do intense hour and a half sessions, with tackles flying in sometimes, that was something. Claude Puel, I can tell you that each training session was like a Derby for him. When you were in the middle of the pitch, you had better watch what you were doing. Because between Marcel Dib and Claude Puel, you couldn’t let anything slip (smile). Honestly, it was tough, there were no gifts. But that’s also what gave the tean intensity, no one took time off. Everyone took responsibility and wanted to be on the pitch come match day.

Does a particular match or goal stand out to you?

(He thinks) There were a lot of games with AS Monaco that have been significant. But I must give a nod to the match to be played this weekend, I would perhaps think about PSG-Monaco at the Parc des Princes, where I put a goal in the top corner against Bernard Lama on a free kick in stoppage time, but honestly all the matches had a special flavor. We had a crazy midfield back then, I finished top scorer in the league in 1994. Almost every game or every other game I would score a goal in any position. It was amazing. 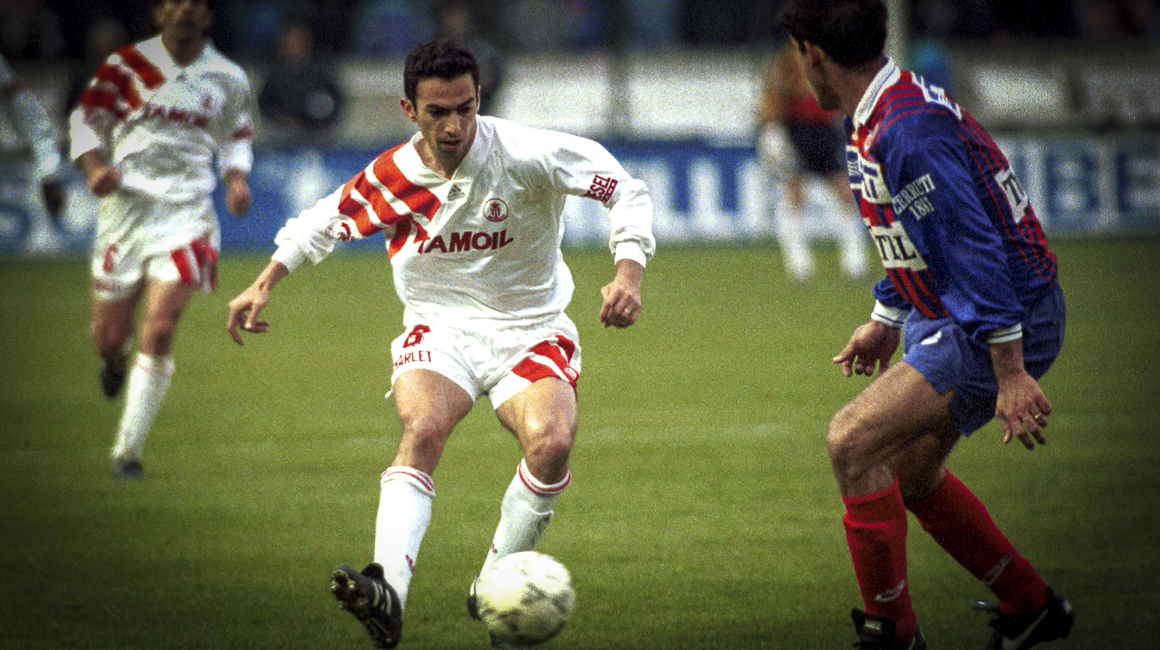 Finally, what do you remember about 1998?

What we did in 1998 was extraordinary. First because it was the first victory for the French team in the World Cup, and then again playing at home. Then above all, we built something, a strength that France did not have before in sport. Before then we had beautiful players, in 1982, in 1986 and clearly in 1984 (when the team won the Euros). But we never had that strength. We managed to create something that today belongs to every Frenchman, every young footballer. We had shown that it was possible. 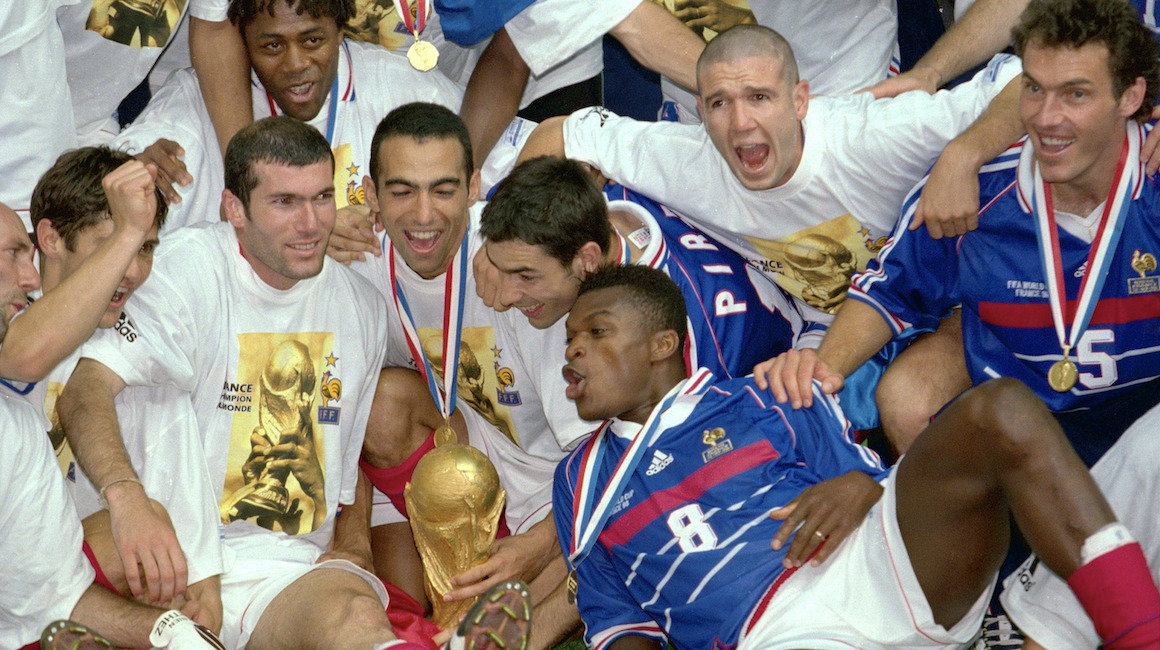 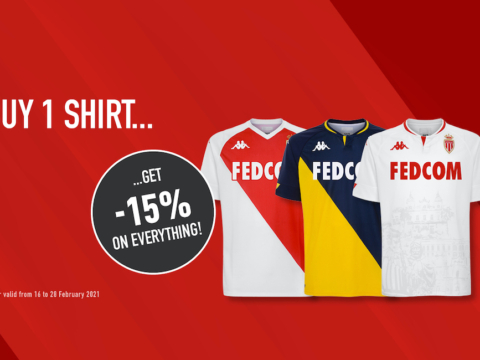 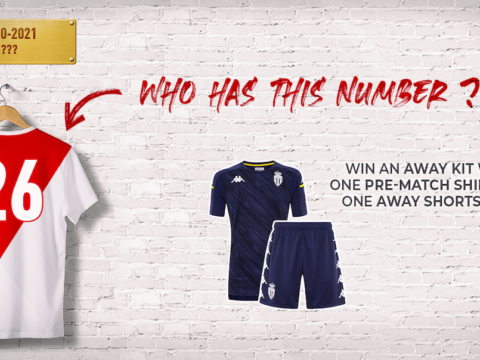 Uncategorized Play "Who wears this number?" and win an away kit! 18 January 2021, 15:45
See more articles
AS Monaco uses cookies on this website. With your agreement, we use them to access how this website is used (analytic cookies) and to adapt it to your needs and interests (customization cookies depend on your browsing and your browser). By continuing your browsing, you give us the permission to use them.
I accept Personalize