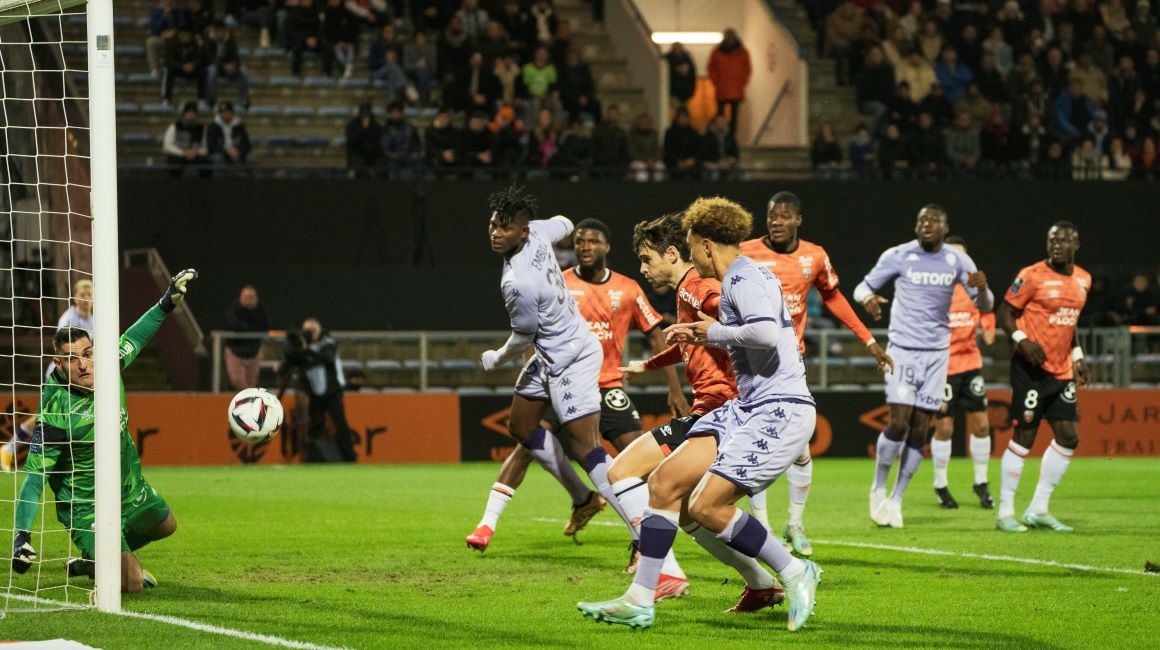 Thanks to a goal from Wissam Ben Yedder in added time in the second half, the Rouge et Blanc snatched a draw at the Moustoir (2-2).

A hard-fought point! In a lively encounter in which AS Monaco hit the bar three times, Philippe Clement’s men clinched a 92nd-minute draw through Wissam Ben Yedder. It was a result that allows them to remain undefeated since the resumption of league play and to into joint-fourth, level with Rennes.

In this first away game of the year, at the Stade du Moustoir in Lorient, AS Monaco wanted to bounce back after being eliminated against Rodez in the Round of 64 of the Coupe de France. The team also wanted to build on their two straight league wins since the resumption of play, away to Auxerre (3-2) and then against Brest (1-0), and they started this match with the hope of making it three straight.

We obviously wanted to qualify and we had the opportunity to do so. We are necessarily disappointed after this elimination. I spoke with my squad yesterday and we must now look forward with Lorient in focus. The good thing with football is that you can play immediately after a disappointing loss. Now is the time to react.
Philippe Clement, in the pre-match press conferenceAS Monaco manager

On the occasion of this 18th matchday of Ligue 1, Philippe Clement played the same eleven who won against Brest ten days earlier. Axel Disasi, captain for this match, was in central defence with Guillermo Maripán, while Mohamed Camara and Youssouf Fofana did the same in midfield. Eliesse Ben Seghir was deployed in support of Breel Embolo in attack.

AS Monaco got off to a strong start and created the first chance of the match through Guillermo Maripán, with a header which went just wide from a corner delievered by Aleksandr Golovin (4′). The match then came alive in the two minutes after the first quarter of an hour with first a shot off the crossbar by Mohamed Camara (15′), before Terem Moffi came up short against Alexander Nübel, our goalkeepered showing a firm hand to deny the hosts’ striker.

A penalty won… and then denied by VAR

Generally dominant, the Rouge et Blanc believed they would be rewarded with an obvious penalty on Breel Embolo, brought down by former Monegasque Vito Mannone. But after watching VAR and as the Swiss striker was about to hit him, it was finally waved off for a narrow offside by Vanderson in the build-up.

Following this chance, the match was balanced and dropped in intensity and we would have to wait for the start of the second half to see the hosts send a shiver through the Monegasque supporters. It would take a great save from Alex Nübel to prevent Lorient opening the score, again winning his duel against Terem Moffi (54′).

But it was indeed AS Monaco who opened the scoring through Breel Embolo. Found with his back to goal by Mo’ Camara in the area, he managed to turn before unleashing a powerful shot that left Vito Mannone no chance (61′), scoring his eighth league goal of the season.

Now well on their way, the Rouge et Blanc pushed to score a second goal and Wissam Ben Yedder let fly with a superb volley, saved  by the Lorient goalkeeper (67′). Then Axel Disasi, with a header from a corner, hit the crossbar (73′). This lack of finishing would unfortunately prove costly with two  goals conceded in quick succession from Dango Ouattara (76′) and Terem Moffi (77′).

Despite these two cruel responses, Philippe Clement’s men continued to be dangerous as they threatened to  equalize but had to cope with a cruel lack of luck, such as when Youssouf Fofana’s attempt caromed off the crossbar. It was the third time our Monegasques had hit the woodwork in the match. But their domination ended up paying off in added time thanks to Wissam Ben Yedder!

The Monegasque striker, who had come on at the hour mark, finished from a perfect cross by Ismail Jakobs, catapulting the ball into the back of the net with a header (90 + 2′) and equalized to make it 2-2. The Rouge et Blanc therefore obtained a precious point from the Moustoir which allows them to draw level with Rennes in fourth place. The team’s next match is against Ajaccio this Sunday at the Stade Louis-II at 5:05 p.m.

4′ A header from Guillermo Maripán narrowly misses, on a corner from Golovin
9′ A hot by Yoann Cathline is captured without concern by Alexander Nübel
15′ Mo ‘Camara’s powerful strike from 25 meters comes off the crossbar
17′ Alex Nübel wins his duel against Terem Moffi
25′ Penalty for AS Monaco is annulled by VAR for an offside in the build-up by Vanderson
54’ Alexander Nübel again keeps out Terem Moffi
61′ Goal by Breel Embolo who beats Vito Mannone from close range
67′ Ben Yedder’s volley is pushed back by Vito Mannone
73′ Header by Axel Disasi comes off the crossbar
76′ Lorient equalize through Dango Ouattara with a header from a corner
77′ A goal by Terem Moffi finishes of an express counter-attack
84′ A strike by Youssouf Fofana comes off the bar
90+2′ Wissam Ben Yedder equalises with a header

Scorer of the equalizer at the very end of the match, Wissam Ben Yedder has now scored a whopping 14 goals off the bench in the French top flight since his arrival at AS Monaco in the summer of 2019. It was also 86th with AS Monaco, allowing him to get a little closer to Christian Dalger and his 89 goals in Monegasque colors. X factor!