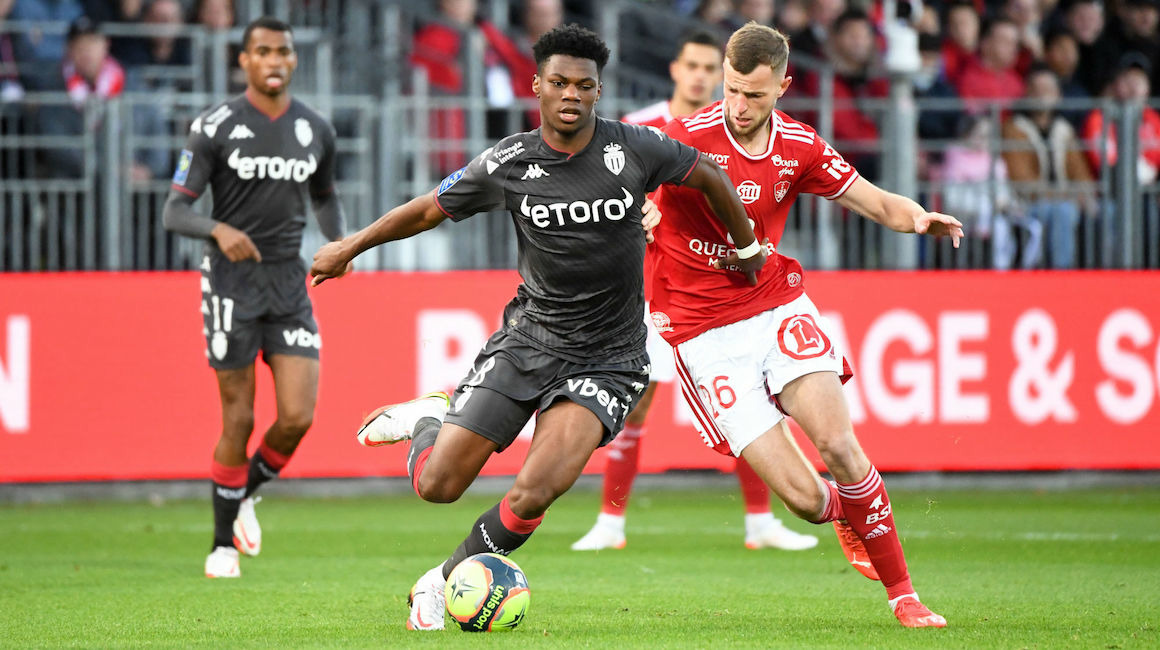 At the end of a closely fought match, where the decisions did not turn in our favor, the Rouge et Blanc fell to a Breton side who unfortunately were very clinical in their finishing, 2-0.

An unlucky evening. AS Monaco ended up falling away to Brest, after a series of unlucky circumstances (2-0). Trying to build on the good form of late, the two victories in Eindhoven (2-1) and against Montpellier (3-1), Niko Kovac decides to line his side up in a traditional hybrid 4-4-2, in what was his 50th match in Ligue 1 on the bench of AS Monaco. Guillermo Maripán started off in defense, while Jean Lucas lined up in midfield against his former teammates, alongside Aurélien Tchouameni. On the Breton side, Academy-trained Romain Faivre was included from the off by Michel Der Zakarian, while Irvin Cardona started on the bench.

A story of set pieces

The match began with plenty of dominance from Monaco, facing a Brest side playing with a very low block, in a Stade Francis Le Blé which was being buffeted by a strong wind. These conditions would hardly tell the story of the match’s first chance, though as it was Steve Mounié who opened the scoring on a set piece, pouncing on a deflected free kick from Romain Faivre at the far post (1-0, 18′).  It seemed a bit of undeserved success for Brest, who had converted what was their first shot of the match. The Monegasque reaction was almost immediate, though with a low strike from 25 meters from Aurélien Tchouameni (23′) drifting wide.

Aurélien tries to react but his shot lacks precision.

It was then the turn of Caio Henrique, who has been very impressive lately with 7 assists in just 17 games, to be enterprising on the left flank. He tried to play in Kevin Volland with a low cross close to goal, but it was well cut out by Brendan Chardonnet (28′). The Brazilian was again dangerous on a shot from a close angle, which barely missed finding Marco Bizot’s goal (40′). SB29 thus went into halftime with the lead, giving Niko Kovac a chance to make a tactical change.

A change in formation

Sofiane Diop, booked in the first period, was replaced by Myron Boadu. And it paid off immediately, as the Rouge et Blanc showed a more offensive side to their game. On a fine pass from Kevin Volland, Gelson Martins had a chance with a header, but it was captured by Bizot (56′). Even with AS Monaco gaining the upper hand, the locals remained dangerous on the counter. Franck Honorat, who latched on to a misplayed ball as he entered the box, tried a volley against Alexander Nübel, but the German goalkeeper perfectly blocked the ball (60′). Niko Kovac then brought on Golovin, Sidibé and Jakobs in quick succession, in an attempt to energize the flanks.

The second half was still being played to the advantage of the Monegasques who were getting forward quickly and delivering good balls into the box, especially through the substitute Ismail Jakobs. Still, though, Steve Mounié was on the verge of getting a double with a header (72′). But it was the former Nice player, Franck Honorat who would double the lead on a lightning counterattack led by the duo of Faivre and Cardona. The latter crossed to the far post for Brest’s top scorer this season, who scored his 4th goal of the campaign (2-0, 79′).

Get back to work in Europe

In a challenging last quarter of an hour, Romain Faivre, who was very active, was even close to scoring directly from a corner, which crashed off the crossbar (88′). Shortly thereafter, Youssouf Fofana, who had just come on, also tried his luck, also without success (89′). The score would  remain 2-0 for Brest, who won for the first time this season. For their part, Wissam Ben Yedder’s teammates will very quickly be back in action in the Europa League on Thursday at the Stade Louis-II, against PSV Eindhoven (6:45 p.m.). It’s a chance for the team to quickly lift their heads!