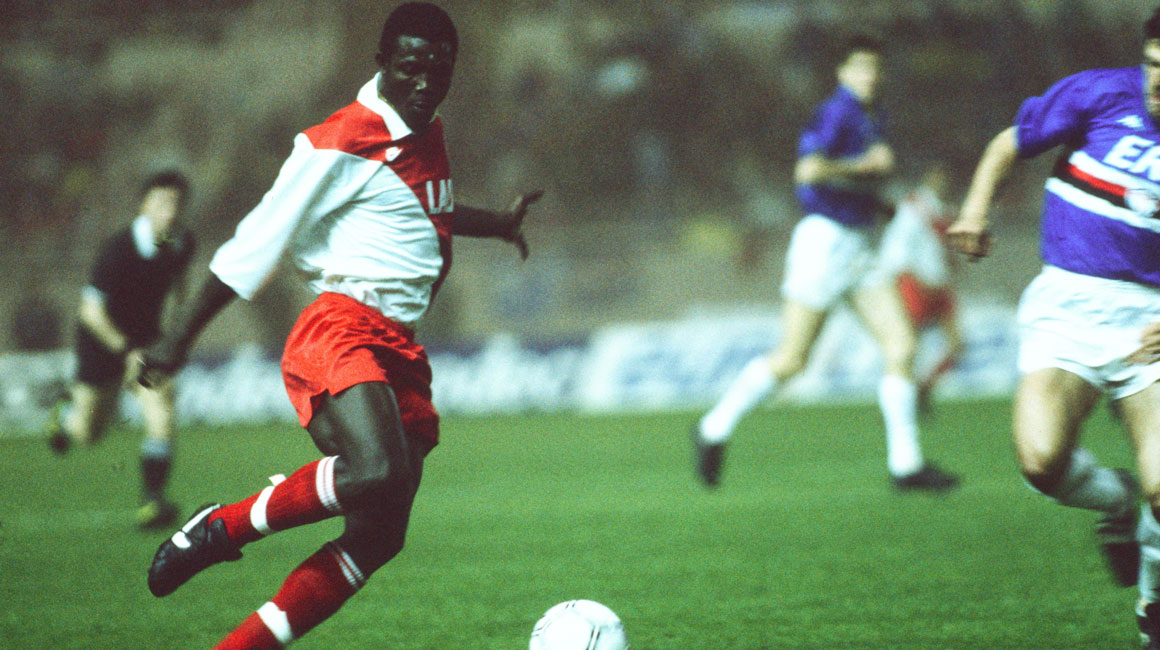 The AS Monaco - Sampdoria match from Genoa will take place this Saturday at 19:30 at the Stade Louis-II, as part of the Philipp Plein Cup, bringing us back to the 1989-1990 season, when the two teams were competing for a place in the final of the C2.

How could anyone forget almost thirty years ago when AS Monaco and Sampdoria of Genoa met in the semi-final of the Cup Winners’ Cup? How could one not remember the first of the seven European semi-finals played by our team in the spring of 1990? Those new to the club may not remember this glory, but those with gray hairs will always remember.

Belenenses in the beginning
In September 1989, after losing to Marseille in one of the finest Coupe de France finals ever a few months earlier (a 4-3 defeat), the Rouge et Blanc took part in the Coupe Winners’ Cup against the Marseille side, who had achieved the double the previous season. The adventure began in the last 16 in Lisbon against Belenenses, where AS Monaco drew 1-1 (goal by Ramon Diaz). The return match was a formality. George Weah scores two goals early and Fabrice Mège scores a third time before half-time. The score did not change, and Arsene Wenger’s men advanced to the round of 16.

Ramon Diaz and the Berlin Wall
Faced with the rough East German training of Dynamo Berlin, the Red and White were held in check in the first leg played in the Principality (0-0). The return match was scheduled for November 1, 1989. No goal was scored during regulation, and the two teams needing extra time. When Eike Küttner finally opened the scoring for Berlin in the 110th minute, the Monegasque chances dwindled. But with a masterful free-kick, Ramon Diaz equalizes three minutes before the final whistle. The Argentinean beat the proverbial Berlin Wall, nine days before the fall of the real wall! Historic.

Word to the defense
Thanks to the goal scored outside Monaco, the squad reached the quarter-finals against Real Valladolid, their obstacle to their first European semifinal. Like against Berlin, no goal was scored during the regular time of the first leg in Spain, prior to the return match in the Principality. Extra time did not change anything, as the Red and White relied on Jean-Luc Ettori for the only shootout European goal recorded in the continental competitions for our club. The Iberians only scored once as AS Monaco won 3-1 and joined the European Cup for the first time!

20,000 spectators at Louis II!
On April 3, 1990, against Sampdoria of Genoa, AS Monaco played their first final. The Italian squad led by Vujadin Boskov looked good with Gianluca Pagliuca in goal, Pietro Vierchowod in defense, Srecko Katanec and Attilio Lombardo in the middle, and an especially impressive offensive pair composed of Gianluca Viali and Roberto Mancini. The Red and White were clearly not favorites, but in a Louis-II with 20,000 spectators, a record, they clearly dominated the first half. The opening score from George Weah on a corner in the 40th minute was the highlight of the first half.

Vialli unleashed
Sampdoria woke up after the break, but AS Monaco managed to retain their advantage until the 75th minute, until a very generous penalty awarded to the Italians by the German referee, Mr. Kirschen. Incredulous in the face of this absurd decision, the Red and Whites watched Gianluca Vialli’s “Panenka” equalizer. The Italian star realized this had destabilized his opponents, as he took the opportunity to score a second time with a header in the 78th minute. In three minutes, the Monegasque dream had collapsed. And if the equalizer of Ramon Diaz in the 81st, on a deflected shot by a defender, somewhat revived the flame, everyone knew that with the prospect of the return match being in Marassi a qualification for the final would be a real feat.

Golden generation
Underdog status was quickly verified on April 18, 1990 at the home of Samp’. Vierchowod opened the scoring in the 9th minute, and Lombardo widened the gap in the 12th. Trailing 2-0 before even the first fifteen minutes of play, the Red and White were well behind, despite a promising first 10 minutes. Without ever giving up, AS Monaco was still not able to turn things around, letting Sampdoria reach the final.

By winning 2-0 against Anderlecht, the Genoese formation lifted the trophy in Goteborg a few weeks later, a year before lifting the Scudetto under the shadow of the great AC Milan (1991), and two years before the final against FC Barcelona’s Johan Cruyff, while AS Monaco did the same against the Werder Breme (1992). It was still early to say, but April 1990 saw one golden generation of a side against the same in the other. Thirty years later, we can see how this has marked the history of AS Monaco and Sampdoria of Genoa.