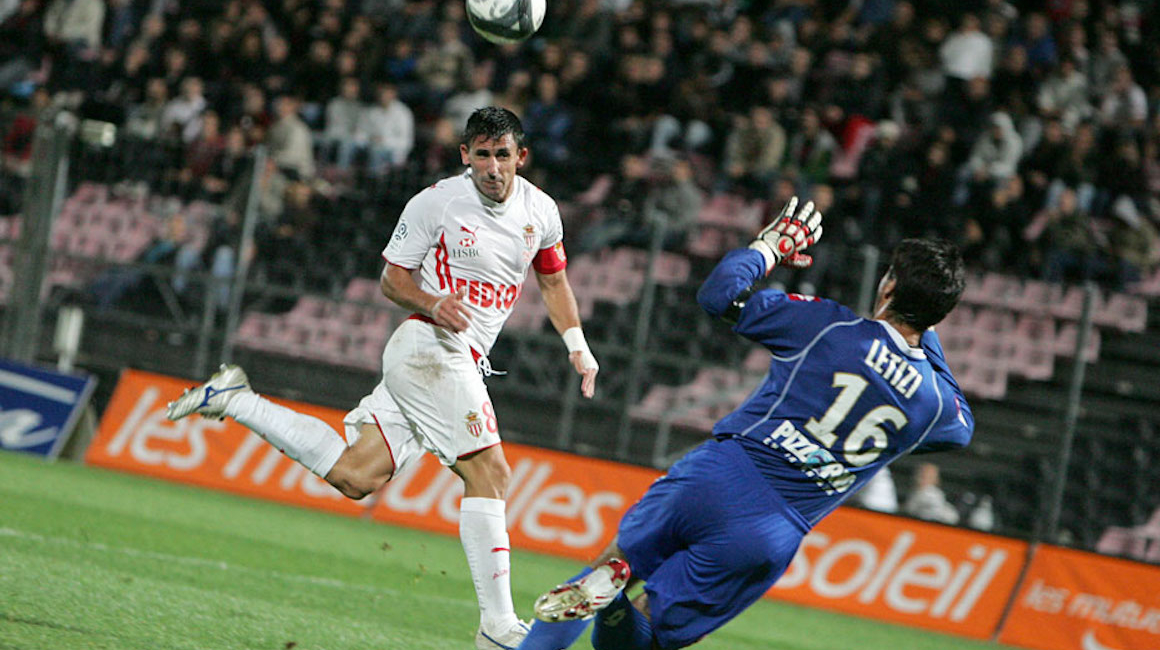 By scoring a double in the derby in Nice in 2009-2010, the Argentinian Alejandro Alonso delivered victory to the Red and Whites at the Stade du Ray (3-1). To celebrate our former captain's 38th birthday we look back at this incredible memory of his time at the club.

Saturday, September 19, 2009. That evening, Nice, who couldn’t manage to extricate themselves from the red zone, were preparing to welcome their Monegasque neighbor to their pitch. Les Aiglons were short of points at the start of the season, with only one victory in five games. For their part, Monaco were seventh at the time of kick-off of the match and had the opportunity to push into the European places. Nobody in the Principality had forgotten the insult of the previous season in the Riviera derby, when Le Gym had won by 3 goals to 1 at the Stade Louis-II. Guy Lacombe had been coach of AS Monaco for just a few weeks and the goal is clear: winning at the Stade du Ray.

A whirlwind start to the match

The game started with a flurry of action. In the sixth minute, Nenê was fouled in the area by Nice’s Apam and earned a penalty. The Brazilian took the spot kick and shot hard to the left. David Ospina’s hand is not firm enough to keep the ball out, and Monaco were already leading 1 to 0. Four minutes later, the Red and White assault on the opposing goal continued and Gudjohnsen, just arrived from Barça, managed to deflect a good ball with the outside of the foot towards Coutadeur. The young midfielder broke forward to push the ball towards his captain Alejandro Alonso, isolated on the right. Poorly marked, the Argentinian fired an unstoppable flat-footed shot  from the  edge of the area. AS Monaco had their breakthrough before the quarter of an hour of play in this derby.

An attack who are working hard

If Loïc Rémy, newly signed for Le Gym, managed to reduce the score before the break, but the players from the rock did not reduce their efforts. The Nice defense did not seem to be worried when they returned from the locker room and started the second period. On the bench, Guy Lacombe asked his team to continue attacking, to seek a third goal. Between Gudjohnsen, Nenê, Alonso, Gakpé and Park, the new Monegasque manager had no shortage of attacking options. In the visitors’ stand, the Red and White supporters who made the short trip continue to urge their side on.

And they are right: in the 71st minute of play, when the pace of this match had dropped, Alonso led a counterattack alongside Park into the opposing area. He picked out the Korean, who played back a sublime cross into the middle. The captain, more used to providing assists rather than scoring goals, lobbed Letizi perfectly with a header and scored the first double of his career in front of the Nice kop. Monaco won by 3 goals to 1 in the derby and continued a fourth season unbeaten against their rival.