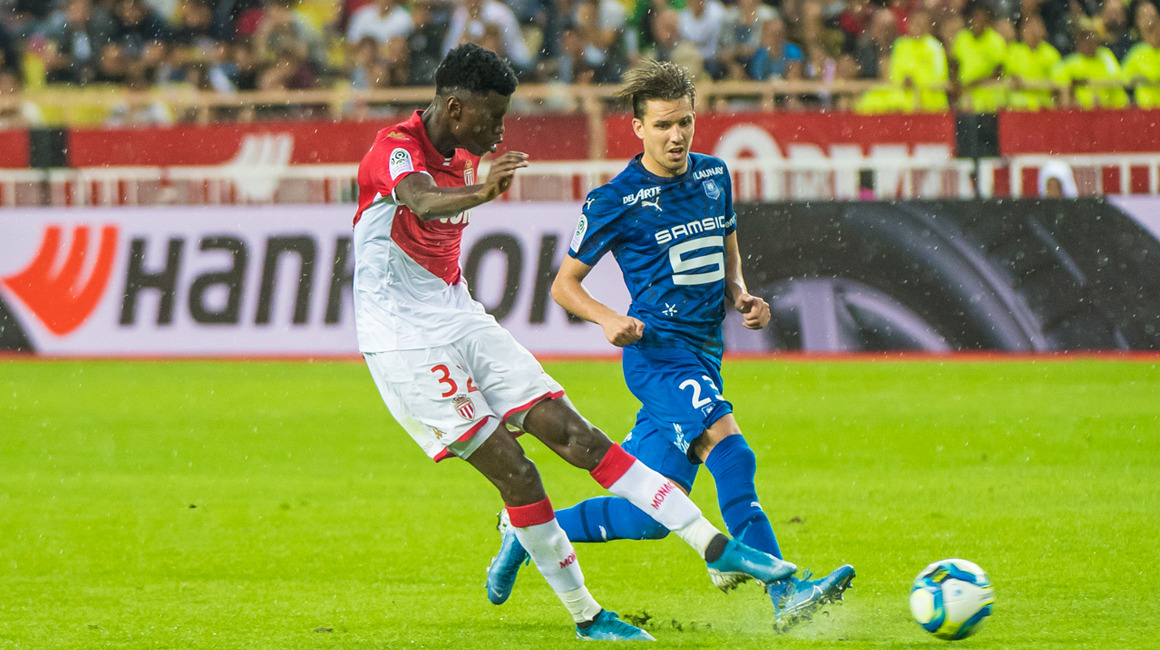 Ruben Aguilar : "A good test for us"
The Red and Whites will take the pitch at Roazhon Park this Saturday at 9 p.m., to challenge Stade Rennais as part of Matchday 4 of Ligue 1 Uber Eats. The Breton side will play in the Champions League this season.

Here is the first “top of the table” duel of this 2020/2021 season for AS Monaco, who are about to challenge Stade Rennais on their home turf (Saturday at 9 p.m., at Roazhon Park). With seven points each, the two teams currently occupy second and third places in the table two points behind Saint-Etienne, who have won their first three Ligue 1 matches.

Julien Stéphan, the manager who changed everything

At only 39 years old, Julien Stéphan has transformed Stade Rennais since he took charge of the club’s first team in December 2018. While he had been in charge of the reserves, the coach of the Rouge et Noir was installed on the bench for an interim period that went well, with two wins against Lyon and Dijon. As a result he was named the coach of SRFC through June 2020. His first season on the Breton bench ended with a victory in the final of the Coupe de France, and his second, last year, saw him lead the club to the group stage of the Champions League for the first time in its history by finishing 3rd in Ligue 1. It is therefore against a European team that AS Monaco will compete this Saturday.

Rennes, third in Ligue 1 last year, will play in the Champions League

Rennes started their league campaign against another team that will represent France in Europe this season, Lille OSC, who will take part in the Europa League. The two teams played to a draw (1-1) with defender Damien Da Silva the scorer for SRFC. The Bretons then beat Montpellier with an own goal from Damien Le Tallec and an stunning finish by Eduardo Camavinga. Finally, on the third matchday, Julien Stéphan’s men won away to Nîmes, 4-2, thanks to Benjamin Bourigeaud but also two new recruits: Nayef Aguerd and Serhou Guirassy, the latter scoring a double in his first appearance in Red and Black. Stade Rennais have also welcomed Martin Terrier into its ranks and extended the loan of Steven Nzonzi for an additional year.

We are happy to play this kind of match. They may be a higher level opponent, but it’s an interesting match against a team that has been performing well lately. I think our players are ready and that they will be able to compete in this game.
Niko KovacManager, AS Monaco

Rennes are a very good team that will play in the Champions League and it is a good test for us. We are coming off two victories, in Metz we conceded a red card quite early but we saw that the team came together very well, and against Reims we managed to come back from being down 0-2 to draw 2-2. The same thing happened this weekend against Nantes where our opponents pulled a goal back and we managed to raise our level to regain the upper hand. These are things that make you feel confident and aware that you are strong and that teams will look at us differently. This will help us to get a result in Rennes. Everyone is a part of the team.
Ruben AguilarAS Monaco defender

I am happy that Sofiane Diop can have some playing time. He is a quality young player, last year he was able to gain a lot of experience with Sochaux. I had regretted his departure at the time, as I had had him with the reserves. I'm going to be happy to see him on the pitch if he plays on Saturday.
Julien StéphanManager, Stade Rennais
We want to stay at the top of the table. Monaco are a very good team, it's going to be an open game with lots of attacking play. We have studied the opponent, we are ready for the match. It's going to be a very good game in which to play.
Nayef AguerdStade Rennais defender

Stade Rennais – AS Monaco by the numbers…