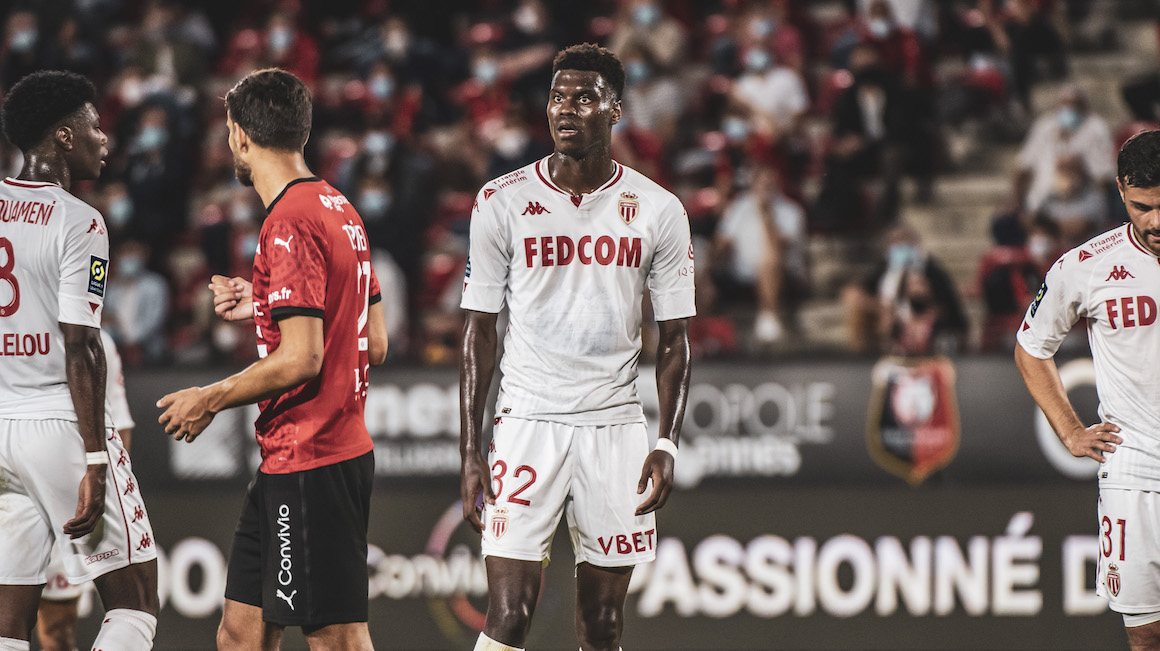 Cesc Fàbregas flashback interview
AS Monaco lost for the first time this season, conceding in the last moments of the match against Stade Rennais in the big matchup of Matchday 4 in Ligue 1 Uber Eats (2-1).

When the game kicked off, the two teams were tied in the Ligue 1 table with seven points from three games. With the unacknowledged objective of takeing back the provisional top of the table from AS Saint-Etienne and Claude Puel, who was the winner for the third time in as many matches on Thursday evening, on the occasion of the former Red and Whites’ boss 600th match in Ligue 2. Niko Kovac, who on this trip to Brittany would benefit from the return of Youssouf Fofana, who had been suspended against Nantes (a 2-1 win), once again set his team out in a 4-3-3 with only two changes to the starting XI.

Returns for Sidibé and Fofana

Djibril Sidibé, a last minute absence through injury last weekend, regained his place on the left side of defense. Sofiane Diop, one of the best players in Red and White in AS Monaco’s 1000th victory, started on the right wing, with Fofana returning to take a place in the midfield three. These looked rather astute choices at the start of the match, with a great chance from Wissam Ben Yedder in the 7th minute of play. On a cross from Ruben Aguilar from the right flank, the French international (9 caps, 2 goals) failed to score a superb goal on an acrobatic effort blocked by the back of Damien Da Silva.

The match started at a steady pace, but with very good defending from both sides, as exemplified by interception made by Benoît Badiashile on a cross from Faitout Maouassa from the left (18’). Shortly thereafter, Benjamin Lecomte intervened on a corner kick taken by the Brazilian Raphinha (25’). The heavy battle in midfield showed no signs of flaws on either side. Once again, AS Monaco had their best chance from a set piece.

On the prowl within the six-yard box, after a blocked shot from Sofiane Diop, which was poorly cleared by the Rennes defense, Wissam Ben Yedder, again, did not miss the chance he was given. Slightly on the right of the area, he catapulted the ball into the opposite corner of Romain Salin’s goal (1-0, 28 ’). The Monegasque striker and captain opened his tally this season in Ligue 1. There were few chances thereafter, even if Rennes tried to get close to Benjamin Lecomte’s area, the goalkeeper was well protected by the duo of Disasi and Badiashile.

In the second period, it was more of the same. Possession was more in favor of the hosts, although the best chances fell to Niko Kovac’s men. Even if Martin Terrier did well to challenge the AS Monaco goalkeeper after a good run on the left side, it was still Wissam Ben Yedder who stood out. First there was a header, on a corner by Cesc Fàbregas (56 ’). Then he latched onto a long ball by Djibril Sidibé over the top of the Breton defense, on a poor clearance.

AS Monaco miss the chance to extend their lead

The Red and Whites’ captain first-time shot unfortunately hit the crossbar of Romain Salin (57 ’). It’s the third time the former Toulouse player has hit the woodwork since the start of the season. The response from Rennes was immediate. Benjamin Bourigeaud first saw his attempt blocked by Axel Disasi for a corner (59’). The Stade Rennais midfielder then attempted a heavy shot, low to the ground from 25 meters, which crashed off Benjamin Lecomte’s right post (65 ’).

There was no time to breathe for the crowd at Roazhon Park, who then saw Youssouf Fofana latch on to a long ball by Ben Yedder. Unsettled by a last-ditch tackle from Nayef Aguerd, the Monaco midfielder fumbled his one-on-one with Romain Salin on the break. After a few minutes of struggling, AS Monaco conceded after a powerful header by world champion Steven N’Zonzi. Recovering the ball in the heart of the pitch, the defensive midfielder played the ball wide and was picked out in the box by Truffert, who sent him a perfect cross resulting in an unstoppable header (1-1, 81 ).

An unlikely twist of fate

Meanwhile, Serhou Guirassy had already put the Red and White defense on alert with a powerful header flashing just over Benjamin Lecomte’s bar (79’). The Bretons’ equalizer breathed new life into a match that has become completely frenetic. Rennes pushed on, playing with more and more urgency, but Monaco did not crack. Until the last Breton chance, that is. On a long ball by Hamari Traoré, deflected by Guirassy, the ball ends up at the edge of the Monegasque penalty area, where Adrien Truffert, already having played provider for the first goal, hit a heavy shot that the Monegasque goalkeeper could not control.

Playing in his first match in Ligue 1, the Rennes left back, who had replaced Faitout Maouassa just before the break, nealy single-handedly changed the course of a match that had been until then relatively dominated by AS Monaco. It was a frustrating result, even if Niko Kovac’s players provisionally remain in the top 5 of the table.