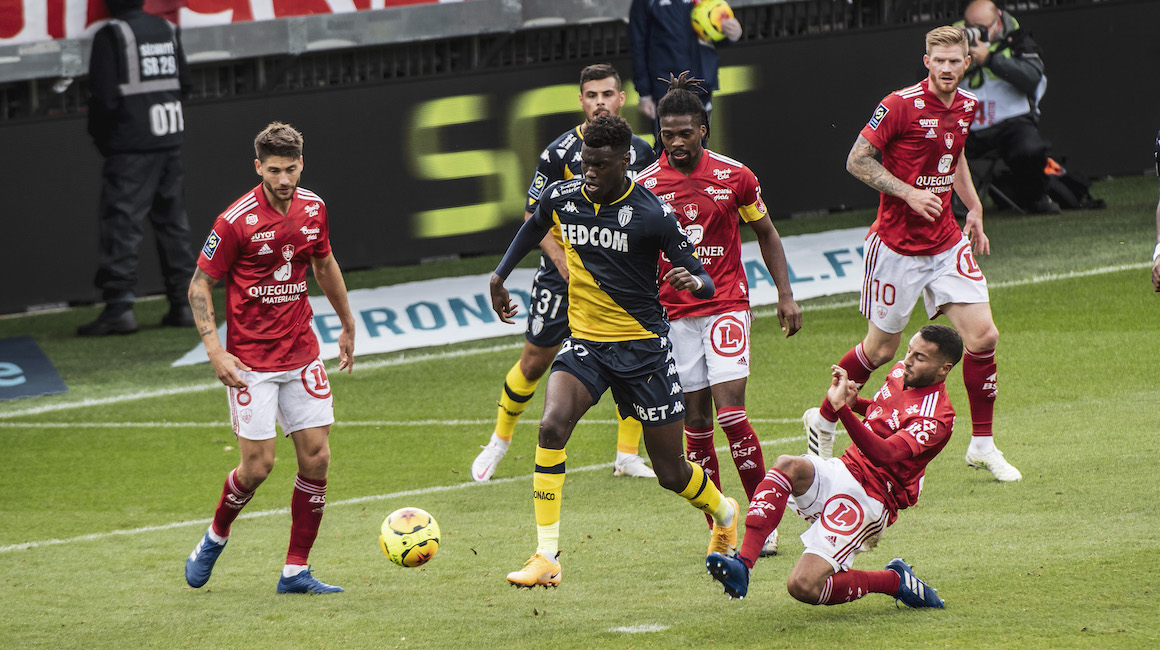 Mikaël: "Monaco has the training DNA"
AS Monaco lost playing a very young side away to Stade Brestois (1-0), on the sixth matchday of Ligue 1.

On the 6th matchday in Ligue 1, Niko Kovac was deprived of several players through injury (Golovin, Henrique, Maripan, Ballo-Touré) and suspension (Axel Disasi and Aurélien Tchouameni), the latter two being regular starters since the beginning of the season. The Monegasque coach decided to start in his traditional 4-3-3, with three defenders who were  Academy products, including Giulian Biancone at left back. Sofiane Diop started in the midfield three as Gelson Martins played on the left wing.

Pressure from the Bretons

As usual, Stade Brestois pressed from the start of the match, living up to their reputation as a very attacking team. After a first chance for Wissam Ben Yedder on a super delivery from Chrislain Matsima (8′), who was starting in central defense, it was the Bretons who found the opening goal. On a cross from Gaëtan Charbonnier from the left, Romain Faivre, a product of AS Monaco’s academy, couldn’t miss from six meters (1-0, 8′).

With the intense pressing by Brest, the Monegasques were nearly surprised again on a run by Steve Mounié on the right side of the area. But the strike was deflected by Benjamin Lecomte and blocked on the line by the very involved Chrislain Matsima, who was celebrating his first start in Ligue 1 (10′). Shortly thereafer, Gelson Martins scared the Stade Francis-Le Blé crowd with a curled shot that slipped a few centimeters wide of the left post of Gautier Larsonneur (13′). 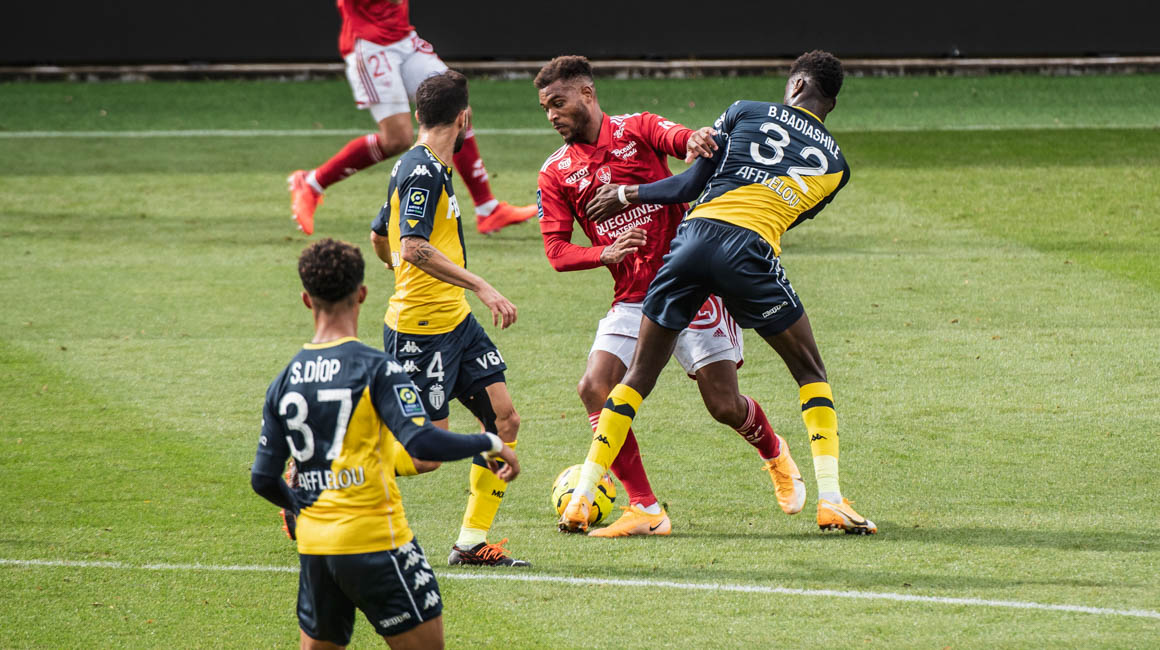 Monaco are in control, but continue to search for a breakthrough

The rest of the half was largely a battle in midfield between two teams who do not want to leave anything to their opponent. Despite this, possession predominantly fell to the Monegasques, with 60% possession for Niko Kovac’s men, who still struggled to get close to the opponent’s area and offer much that was really dangerous, with only one shot on target among their nine attempts. Only a half-volley from Giulian Biancone made the locals worry, just before half-time, after a chance from Wissam Ben Yedder on a free kick, which was blocked by the wall (45′).

As a result, Niko Kovac decided to bring in the most recent recruit of Monaco’s summer transfer window, the Portuguese midfielder Florentino Luis, to patrol midfield in front of the Red and Whites’ defense. Despite this, the opposition started the second half as they had the first, with two chances in quick succession for Gaëtan Charbonnier (50′). It was only shortly before the hour mark that the teammates of Cesc Fabregas, now playing higher up the pitch, showed more urgency, on a cross from Giulian Biancone well met by a header on the other side, by Ruben Aguilar, who had scored last weekend against Strasbourg (60′). 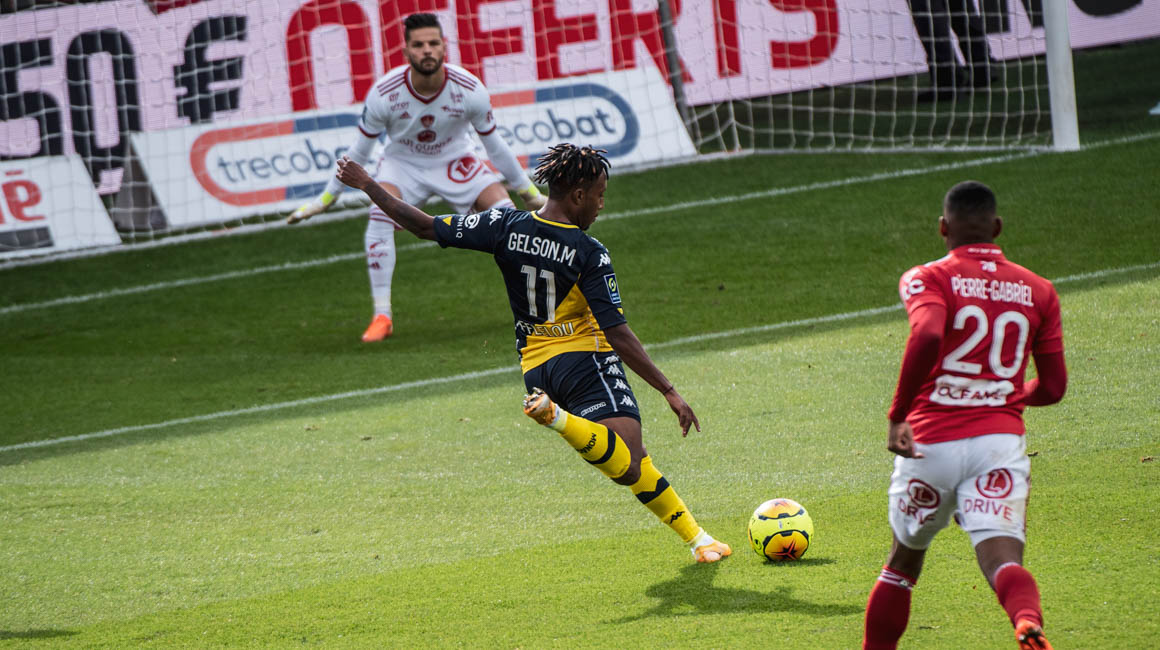 The match changes its pace from the hour mark

Then there was a volley from Sofiane Diop at the edge of the are, following a mis-cleared ball in the center of the pitch (61′). To further this new period of domination by the visitors, Niko Kovac decides to bring on fresh blood. Stevan Jovetic and Enzo Millot, making his first appearance in Ligue 1, thus came on, to energize things in the midfield. At that moment, AS Monaco had five players trained at the Academy on the pitch at the Stade Francis-Le Blé, including Romain Faivre with Brest, but above all four “Munegu Babies” playing for the Red and White.

AS Monaco were fielding a very rejuvenated team, and bravely tried their luck against a valiant Breton team. It was this daring that lead to an off-target shot from Jovetic (72nd). Shortly thereafter, the staff of the Principality’s club changed the Monegasque eleven once more, with Pietro Pellegri and Willem Geubbels coming on just before the last quarter of an hour. Niko Kovac also made an important tactical change as AS Monaco moved to three at the back.

This upheaval was even on the verge of bearing fruit through a header by Stevan Jovetic, whose shot passed very close to the left post of Gautier Larsonneur (83′). Once again Ruben Aguilar was brilliant on the right flank, even coming close to scoring shortly after Jovetic’s chance (85′). The Monegasques were pushing for an equalizer but the Bretons remained very compact with a block of nine players in midfield, protecting the penalty area.

AS Monaco eventually lost by the smallest of margins, despite having the lion’s share of possession (67%) and no less than 21 shots attempted. Despite the result, the Red and Whites remain sixth in the Ligue 1 table, three points from the podium.